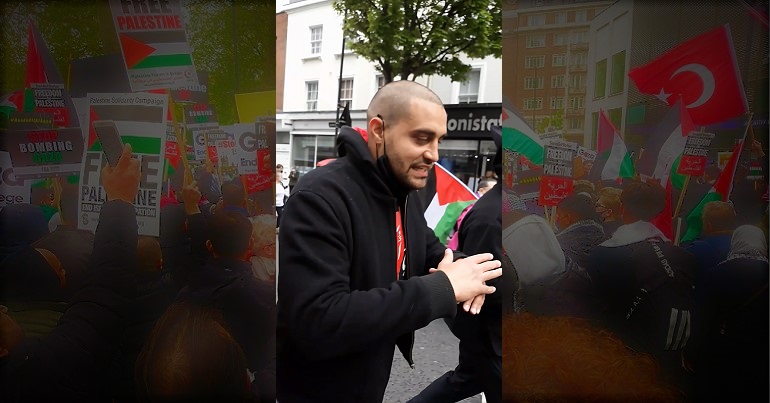 The huge demo in London for Palestine on Saturday 15 May was the “rebirth” of the solidarity movement. The Canary was there to witness it. And we caught up with musician and activist Lowkey. He told us that the actions of the state of Israel in Gaza are the “snarls of a brutal regime” presiding over a “horrific siege” of the occupied territories. But the demo was marred by predictable police violence.

As of 4:30pm on Sunday 16 May, Israeli forces have killed at least 188 Palestinians in Gaza in the past week. 55 of these were children. They’ve injured around 1,230 people.

In the occupied West Bank, Israeli forces have killed a further 13 Palestinians. Meanwhile, Hamas rockets have killed ten Israelis, including two children. The violence is rapidly spiralling out of control. Al Jazeera, whose Gaza offices were destroyed by a targeted Israeli strike, said that in one protest in the occupied West Bank Israeli forces killed two people and injured 450 more; 100 of these from live ammunition.

It was amid this backdrop that people in the UK protested on 15 May.

In London, people marched from Marble Arch to the Israeli embassy in Kensington. As The Canary previously reported:

Convenor of Stop The War Coalition (STWC) Lindsey German, who co-organised the demo along with the Palestinian Solidarity Campaign (PSC) and others, said the London march was:

The Canary was on the ground for the demo. It was a huge event. Of note was the vast number of different people there: all ages, ethnicities, and religions: 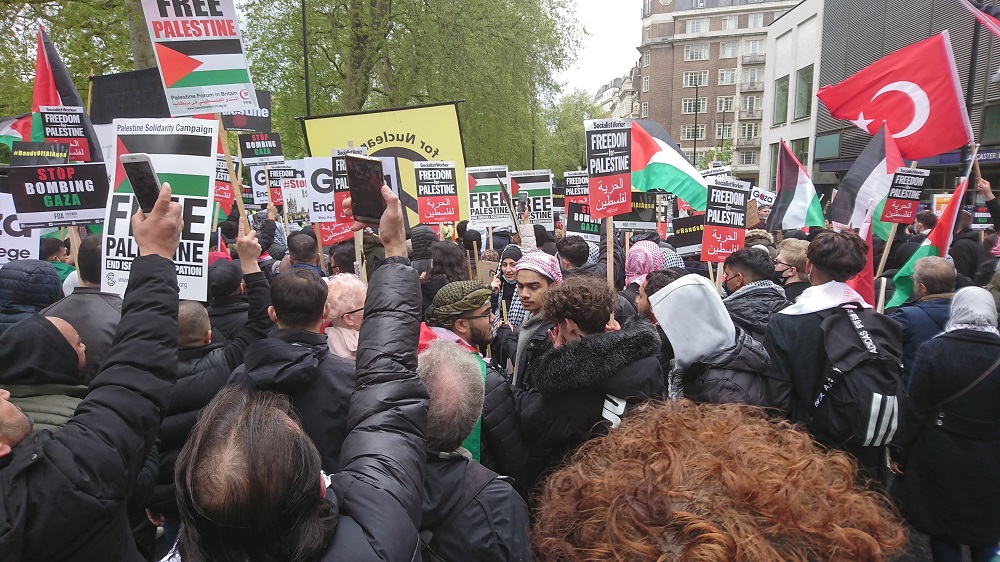 There were cyclists doing a “Big Ride for Palestine”: 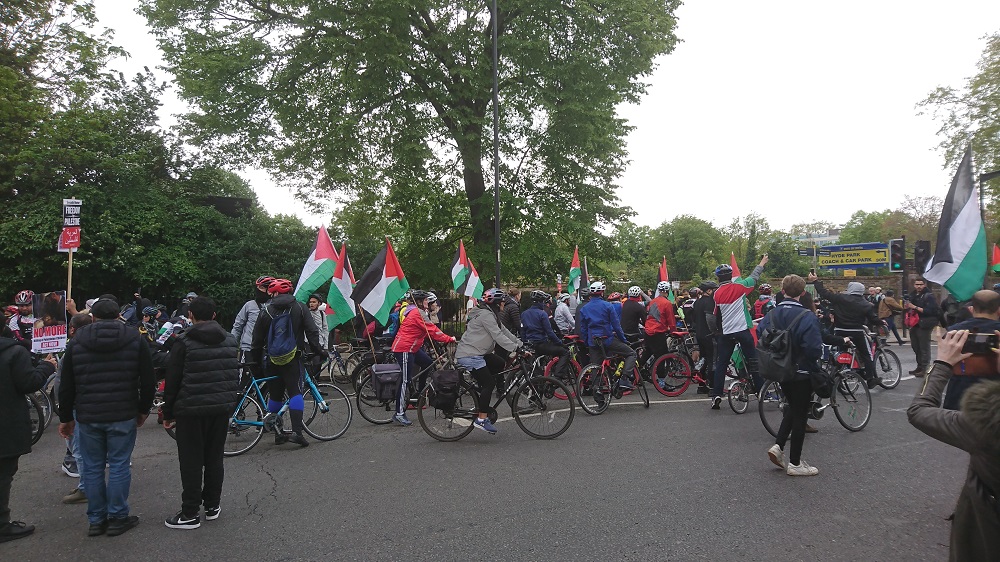 As the demo progressed towards the Israeli embassy, the size of it became clear:

It culminated with a rally, including speeches. Some people noted that ex-human rights lawyer Keir Starmer was nowhere to be seen. Comedian and activist Alexei Sayle called him a “little shitbag”. Starmer’s absence was made worse by the fact Jeremy Corbyn made a speech there. As The Canary‘s editor-at-large Kerry-Anne Mendoza tweeted:

The Canary caught up with musician, historian, and activist Lowkey during the demo.

He told us that the situation in Gaza and the occupied territories was “completely different” to that of Israel’s Operation Protective Edge in 2014:

because you have the involvement of the Palestinian community within the Green Line, so within the state of Israel. You’ve got 1.5 million Palestinians, 50% of them are below the poverty line. There is a real history of impunity with police killing them. They have an affinity… to Palestinians everywhere else and are asserting their identity.

His point is pertinent. Because on Friday 14 May, there were around 200 Palestinian protests around the occupied West Bank. Protests were held in 2014, with Israeli forces killing Palestinians. But they didn’t really take hold until Operation Protective Edge began. The point being that Palestinian resistance to Israel’s actions appears to have started earlier – before any official operation by Israel has even begun.

most importantly, you have Palestinians of the Diaspora returning home as we speak. So this is really an incredible and deeply inspiring moment. Obviously, what’s happening in Gaza is the snarls of a brutal regime that has now over these years built up such a technologically advanced arsenal that it’s able to strike people in the way that they’re doing… that’s on top of an already existing frictionless occupation and horrific siege.

Police: up to their usual tactics

At the demo police were hovering around the whole time. During the main demo they stayed in the background. But after most people left, they became violent. Huck posted a Twitter thread containing the details, calling what was happening “incredibly violent”:

This included, as it tweeted, riot police “appearing from within the [Israeli] embassy”. Police ‘snatched‘ protesters:

police snatch a protestor by forcing them to the floor and it erupts again. huge line of cops behind this one. pic.twitter.com/WS7VEe486H

🚨🚨🚨URGENT- CW POLICE VIOLENCE: police in riot gear are now grabbing protesters who are sitting on the floor & ARRESTING them at the #FreePalestine protest in #London. Our Legal Observers have seen at least 2. Remember: no comment, no caution, get a specialist protest solicitor pic.twitter.com/szaKq5AfD3

🚨🚨🚨THIS is what police intimidation & violence against our communities at protests looks like. Constant unprovoked charges, in full riot gear, at remaining #FreePalestine protesters #SaveSheikhJarrah #PoliceBrutality. We saw the same tactics at #BlackLivesMatter last year pic.twitter.com/ioSNXttatZ

The police referenced potential breaches of coronavirus (Covid-19) regulations when commenting on the demo. It was organised by various groups within the current rules. But given that during the main rally there was no social distancing, it seems to be unclear why the police decided to act when the majority of the demo was over. This is of course a continuation with what people have witnessed at recent demos; not least #KillTheBill.

Overall, people at the demo were angry, passionate, and peaceful. Perhaps what was most telling was the sheer number and ages of the people that came out.

It was also interesting that the corporate media actually reported on it; notably the BBC. Much of the coverage had the usual ‘there’s two sides to the story’, ‘police were injured’, and ‘it’s complicated’ caveats, but as former Telegraph journalist Tim Walker summed up:

Whenever I expressed a view about Palestine – certainly during my Telegraph years – people would always say ‘oh, you know, it’s all very complicated.’ There is nothing complicated about what we are witnessing now: this is butchery, plain and simple, and it is profoundly evil.

The most important point was, as Lowkey said, that:

The narrative that’s being put forward by the BBC and the usual suspects, who… work tirelessly at trying to decontextualise this, and frame it as a sort-of battle that has some level of parity in it. You are seeing that narrative… being completely demolished, sliced through, and pierced… by those on this march, here. We haven’t seen a mobilisation [of the pro-Palestinian movement] like this in London… in the last ten years.

The march served several purposes; not least as Lowkey said to demolish establishment narratives over Palestine. It also sent a strong message to world leaders: much of the public will not tolerate them standing idly by while Israeli forces massacre innocent Palestinians. But most importantly, it sent a message to the Palestinians of Gaza and the occupied territories. It told them that people do care; are in solidarity with them, and will do what they can to try and stop the state of Israel’s heinous crimes.

The PSC and others will be holding another demo on Saturday 22 May in London. Full details are here.