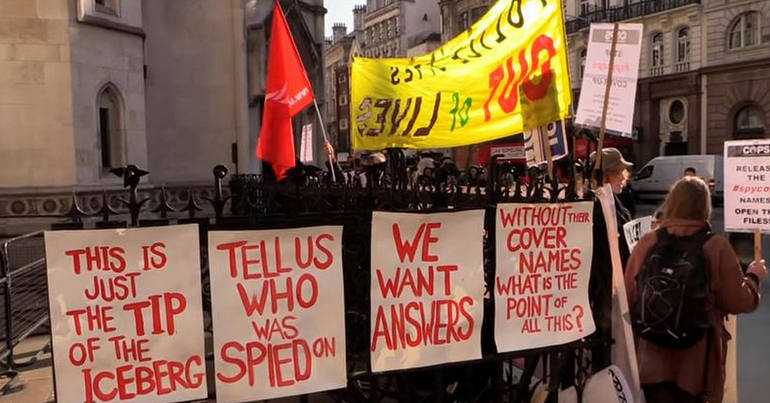 Earlier this month undercover police officer (UCO) HN304 provided testimony to the Undercover Policing Inquiry (UCPI). It revealed attitudes and behaviour of UCOs that appear to support what can only be described as institutionalised rape.

However, aspects of that testimony also included some basic errors, suggesting flawed intelligence-gathering. Extrapolating, that might explain why over decades UCO operations tended to rely on cover-ups of police crimes, frame-ups of protesters that led to miscarriages of justice, and facilitating blacklisting.

A number of spurious claims were made by undercover officer HN304 (‘Graham Coates‘) to the UCPI. For example, he stated that Anarchy magazine was linked to the Angry Brigade via Stuart Christie :

HN304 then targeted Anarchy Magazine, which he claims were connected to the Angry Brigade via Stuart Christie (who sadly died last year).
He admits there was no crime or disorder emitting from the group#spycopsinquiry

And in another reference to Christie, Coates stated: “[redacted] and [redacted] maintained contact with a prominent member of the Angry Brigade, Stuart Christie, who was up in the Orkneys”.

But Christie was never a member, prominent or otherwise, of the Angry Brigade. Instead he was a victim of false accusations by the police, which led to charges and a trial, at which he was acquitted. Furthermore, he co-founded and was an editor of Black Flag and not involved with Anarchy magazine.

Coates all at sea

It’s also claimed by the same UCO that he targeted Albert Meltzer, another editor of Black Flag. Coates appears to have gained nothing of value from his two encounters with Meltzer. This is not surprising, as the latter was famous for his anecdotal style of conversation, which to many seemed utterly confusing, if not disarming.

The inquiry asked Coates where he had met Meltzer and he replied: “I think it was at what was known as the “Black Flag” bookshop in Whitechapel High Street”. Another error: Black Flag – known as the Organ of the Anarchist Black Cross – was based at 121 Bookshop, 121 Railton Road in Brixton, though its postal address was box number BM Hurricane.

Coates also says he came upon a copy of the Anarchist Cookbook, which purportedly explains how to make bombs, at the home of a member of the Anarchy collective. But Crimethinc comments that the ‘cookbook’ is “not composed or released by anarchists, not derived from anarchist practice, not intended to promote freedom and autonomy or challenge repressive power–and was barely a cookbook, as the recipes in it are notoriously unreliable”. During the 1970s and 80s it was readily available in a number of London bookshops, such as Collets. These days it’s freely available on an FBI website.

HN304 provided further proof of how unreliable his testimony was, when he described activist Dave Morris as “violent”:

A #spycops report from HN304 refers to Dave Morris as being drawn to violent actions.
Barr asks if this happened. HN304 says it did not, & admits Dave is not a violent man.

-It's worth adding, no one who knows anything about Dave Morris would ever think he was drawn to violence!

Indeed, I can confirm that in any discussions about direct action Morris would always argue in favour of a non-violent approach.

You couldn’t get much lower or higher

The dubious and often inaccurate claims by Coates complements the underhand activities of another UCO of that period.

The Canary previously reported how ‘Roger Thorley’ (real name Roger Pearce) exploited veteran activist Leah Feldman as cover for his intelligence-gathering. At the time Feldman was in her 80s, was partially deaf and blind, and often needed help moving around, so Pearce obliged.

An insider activist confirms that Pearce (code HN85) spent most of his time at Freedom bookshop. According to one document his SDS supervisor appears to have been DCI David Short.

Pearce went on to head the Special Demonstration Squad (SDS) and oversaw the creation of the National Public Order Intelligence Unit. He was later appointed director of intelligence and commander, Special Branch (SB). On leaving the police service, he was appointed counter-terrorism adviser to the Foreign Office.

Coates also referred to UCO’s “jokes and banter” about women and sex. In this regard he identified several UCOs, including ‘Jim Pickford‘ and ‘Rick Gibson‘. It’s claimed that the latter, whose real name is Richard Clark, formed intimate relations with four women during his deployment years.

Significantly, Coates commented that SDS managers would have been aware of such behaviour:

It was made quite plain with jokes and banter that they [senior SDS managers] knew, we knew and management knew what was going on.

I do not recall anyone challenging the behaviour of UCOs when jokes were made about sexual activity or relationships in SDS meetings. As far as I was aware, these jokes never prompted a question about where to draw the line or resulted in disciplinary action. No one encouraged UCOs to engage in sexual activity while undercover, but the managers appeared to turn a blind eye to the bits of banter and innuendo I heard.

During the inquiry hearings ‘Madeleine’, one of four women with whom UCO ‘Vince Miller‘ had sex, was interrogated about that:

This is a blow by blow questioning of "Madeleine" about exactly what happened when she had sex with the #spycops officer "Vince Miller".

I feel unclean listening to it.

Tom Fowler tweeted his comments on an answer by Miller (HN354) about whether Madeleine would have had sex with a UCO – he replies, pointedly, “definitely not”:

Barr: Would Madeleine have had sex with you if she had known who you really were

Bullshit answer about him being a person, not just a police officer.

Barr: Would Madeleine have had sex with an undercover police officer?

Sex by deceit is not consent and Madeleine argued that what happened to her was nothing short of rape.

Over the years at least thirty women are believed to have been sexually exploited by ‘spycops’, in what can only be described as institutionalised rape. And it’s not just the UCOs but also their supervisors who are guilty.

Frame-ups and miscarriages of justice: case 1

In certain cases infiltration by UCOs led not only to frame-ups but, spectacularly, to miscarriages of justice.

As reported by The Canary, UCO Mark Kennedy played a central role in two such operations: Operation Aeroscope and Operation Pegasus. The latter saw 29 environmental activists convicted of various offences in 2009, after they blocked a train carrying coal heading for the Drax power station, North Yorkshire.

Operation Aeroscope resulted in a raid of a meeting by environmental activists to plan the invasion of the Ratcliffe-on-Soar power station. This saw the arrest of 114 protesters. 26 people were accused of conspiracy to commit aggravated trespass and 20 of those were convicted, although not jailed. A further six of the accused, who were running a different defence and facing a separate trial, exposed Kennedy’s role in the action.

It transpired the Crown Prosecution Service knew all along of Kennedy’s role in the action and during the trial of the 20 had ensured that:

Kennedy’s evidence was kept from court. Moreover, the Independent Police Complaints Commission later found that the CPS also knew about the activists’ plan, not only before it happened but before many of the activists themselves. Furthermore, Felicity Gerry, the prosecutor in the trial of the 20, had been informed about the existence of an undercover officer and had known Mark Kennedy’s true identity a week before any of the activists did.

Frame-ups and miscarriages of justice: case 2

UK spycops were by no means restricted to UK operations. In the same article The Canary also reported on a group of environmental activists who were arrested in 2008 in France. Known as the Tarnac 9, they were initially charged with terrorism. Essentially they were accused of participating in sabotage attacks against high-speed TGV train routes.

Detective chief inspector Richard May of the National Domestic Extremism Unit provided assistance to the French authorities. It turned out the Tarnac activists had also been infiltrated by Kennedy. An extract from a secret document stated that on 29 January 2007 Assistant Chief Constable Sampson gave authorisation to Kennedy to infiltrate a group of people in Tarnac, including two of those who were later arrested and detained.

Subsequent to this information being made available to the legal authorities, the case collapsed. All but one of the defendants – who was jailed for six months on a minor charge – were freed.

Over the years there have been numerous instances of cover-ups by the police and their undercover colleagues. One example concerned the death of anti-racist Blair Peach. For thirty years the Metropolitan Police Service hid a report that stated it could “reasonably be concluded that a police officer” killed Peach after leaving a demonstration.

But the cover-up wasn’t enough: the UCPI also heard evidence that Peach’s partner, Celia Stubbs, who campaigned to get the truth on what happened, was the subject of SDS surveillance over many years.

Examples given above of SDS and SB operations provide just a glimpse into spycops‘ activities.

There was also the 1978/9 ‘Persons Unknown‘ trial, where all defendants who pleaded not guilty were acquitted. By agreeing to the acquittal the jury accepted the defendants’ arguments, which were that they were victims of a conspiracy by the police.

SB and MI5 were also active in the surveillance of the anti-Vietnam War protests and the anti-apartheid protests. And as pointed out by lawyer Gareth Peirce, they were active in subverting the 1984/5 miners strike. Furthermore, the SDS spied on trade unions over four decades.

As reported by The Canary, SB was also active in the 1986/87 print workers strike at Wapping and the 1976/78 Grunwick strike. The 2014 Reuben report confirmed that the SB were in contact with the blacklisting agency the Economic League. And in 2013, the Independent Police Complaints Commission stated it was likely that “all special branches were involved in providing information” for blacklisting purposes.

With regard to more recent years, HM Inspectorate of Constabulary revealed that in England and Wales between 2009 and 2013 alone a massive 3,466 undercover operations took place. More lately The Canary reported on what appears to be a new ‘spycops’ breed. It’s called the National Police Coordination Centre Strategic Intelligence & Briefing (NPoCC-SIB).

Undoubtedly there will be more attempts by undercover officers to spy upon and infiltrate protest groups. But we now know more about their modus operandi, as well as their failings.