Britain's lies and 'disinformation', won't stop its bloody past haunting it - The Canary 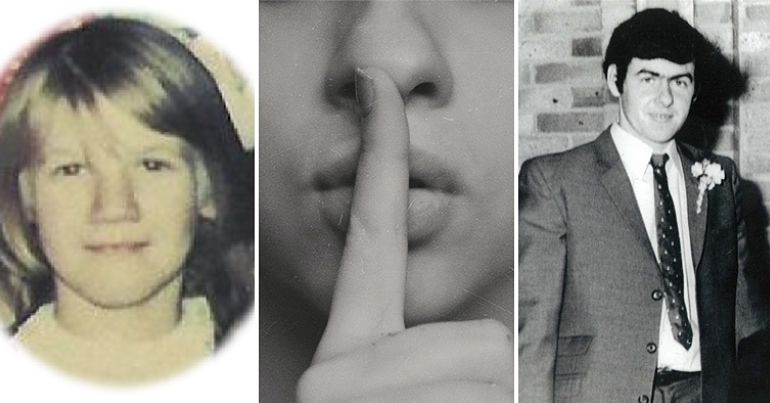 On 11 May a coroner said the British army shot dead nine innocent civilians in Ballymurphy, Belfast between 9 and 11 August 1971. The massacre is far from an isolated incident, but Britain’s bloody record in Ireland is too long to explore in one article. That record is a mix of British establishment collusion with loyalist terrorists, and killings carried out by the British army and police.

The ink could hardly have been dry on the coroner’s report when the anniversary of the death of two more innocent civilians resurfaced. And their deaths, at the dawn of the 30-year conflict in Ireland, remind us who the real ‘terrorists’ were.

Around 8:30pm, on 14 May 1972, 13-year old Martha Campbell was shot dead on Springhill Crescent near her west Belfast home. She was shot in the face and chest. Nobody has ever claimed responsibility for her shooting and the British army has always denied it was nearby.

Her family and local eyewitnesses believe the British army shot her. They believe the army fired:

from a high vantage point in the Moyard area which offered a commanding view of Springhill and Divismore, and protection to Henry Taggart Memorial Hall which the British Army occupied as its base in the area.

So on 14 May this year, the charity Paper Trail released new evidence it has compiled. This new evidence, which Paper Trail uncovered from British army files, appears to show:

not only was a major British military operation about to begin in the vicinity, but a named British Army unit poured fire into the very area and at the same time as it recorded the death of the schoolgirl. 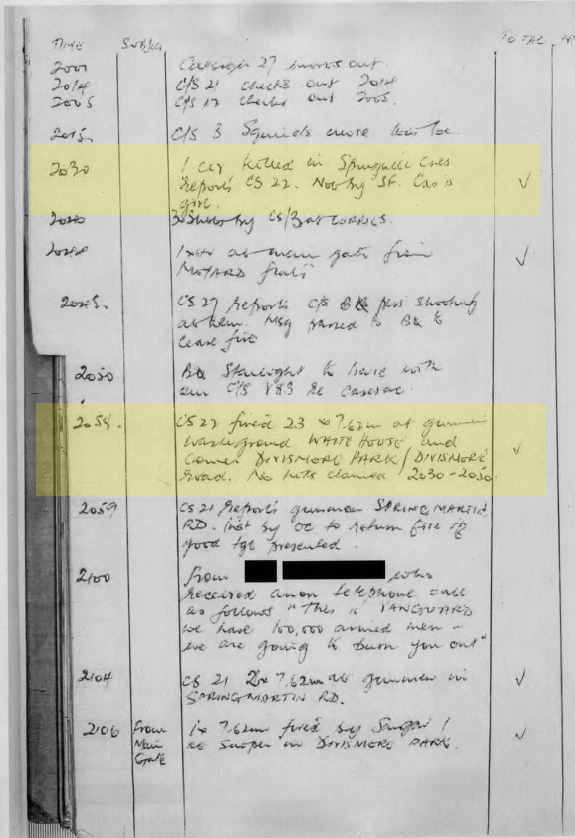 According to Paper Trail’s report:

The evening before, there had been intense fighting in the area following the Kelly’s Bar bomb attack between the British Army, Loyalists and the Irish Republican Army (IRA). Sporadic firing continued that day.

The shooting had stopped for a while, though, and Martha, her friend and [a] local man were the only people on that stretch of the road beside the waste ground to the back of Divismore Park.

In other words, the sniper targeted the unarmed civilians – two teenage girls and local man – deliberately.

The British were there

This report is written by the Company Watchkeeper at the same time as B Company (V2) reports that its soldiers were “now firing for some minutes” in the Ballymurphy area.

There is no other shooting reported by the British Army in this area at the time except these shots fired by B Company, 1 Kings.

Paper Trail believes it can pinpoint the specific British army unit that reported the death of Martha Campbell “and firing from its position in Moyard into the area where she was murdered”. It says the British Army:

only reported firing from its positions, though, and nowhere states that its units returned fire. If they were returning fire, it would be recorded.

The denial of 5 Platoon, B Company, 1 Kings that the British Armed Forces did not kill Martha Campbell rings hollow especially as the British Ministry of Defence has denied it was in Moyard at all, never mind firing into the area where Martha was mortally wounded

According to Paper Trail, a report by the now defunct Historic Enquiries Team (HET) said:

From the papers supplied by the [British] Army to the HET review process … there is no evidence to place the Army in Moyard Park at the time that Martha was shot.

This new evidence and other files published in the report completely overturns this lie and proves that 5 Platoon, B Company, 1 Kings was indeed in Moyard and poured fire at an alleged target in the same area and at the same time as Martha Campbell was murdered. 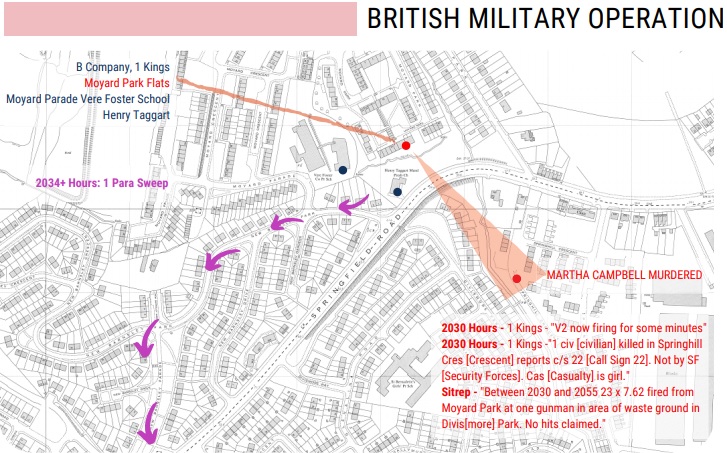 This new evidence must be considered by the Attorney General to grant a new inquest into Martha’s murder. The evidence has been kept from the family for 49 years and some family members have passed away without knowing the truth. How many more years must pass before we get truth and justice. The Campbell family deserve closure so that we can finally let Martha Rest in Peace.

On 17 May 1973, the Royal Ulster Constabulary (RUC – previous name for the PSNI) shot dead 24-year old Michael Leonard. He was just 200 metres from crossing the border to his home in the Irish republic.

His family are lobbying Irish politicians to pressure the British state to investigate his killing. The family presented new evidence in 2019 that they believe proved Leonard’s shooting wasn’t accidental. The RUC allege it was. Instead, the family claim the RUC deliberately targeted and shot at him multiple times.

British Military archives recorded that the RUC officers who killed him:

fired 2 shots at the car which did not stop. They gave chase in a Land Rover and fired another shot which hit him.

The secret British Military files also included disinformation that Michael had broken through an RUC roadblock and that he and his father were members of the IRA when neither of them were.

The RUC officers who killed Leonard didn’t attend his inquest. But the coroner summarised their evidence saying an accidentally discharged bullet hit him and that it was a million to one chance he was in its path. Paper Trail claim this is a lie.

The family also believes the authorities have done nothing to investigate Leonard’s killing more than two years after they presented new evidence. His cousin Fr. Joe McVeigh said:

We now know that the RUC deliberately targeted and killed Michael. The RUC then tried to cover up his murder and lied to the Coroner. We presented this critical, new evidence to the Office of the Police Ombudsman and the Attorney General referred it to the Public Prosecution Service and then Police Service Northern Ireland. It remains with the Office of the Police Ombudsman over two years later. The family is disgusted to learn that the British authorities have done absolutely nothing to investigate the murder of an unarmed Irish civilian by its armed forces. Not only are these police killers escaping justice for Michael’s murder, but our family fears they were guilty of other crimes during the conflict.

The Canary contacted the Ministry of Defence for comment. A spokesperson said:

We continue to assist Northern Ireland courts and police in relation to legacy matters. Any new evidence found on such matters should be handed over to the police, who are the investigation lead in the first instance.

We also contacted the PSNI about the death of Michael Leonard. They responded:

This investigation currently sits with Office of the Police Ombudsman for Northern Ireland and we do not intend to comment further at this time.

The British state has always claimed there was no war in Ireland from 1968 to 1998 – a time euphemistically called ‘The Troubles’. It also claims, despite sending its army and elite commandos to Ireland, that it was the good guy keeping the peace “between the Catholics and the Protestants”. Meanwhile Irish republicans were ‘terrorists’.

Yet the revelations over the last few days, and the truth people living in Ireland have known for fifty years and more, shows the British as ‘terrorists’.

And while that past can’t change, justice campaigners are changing the present and future.