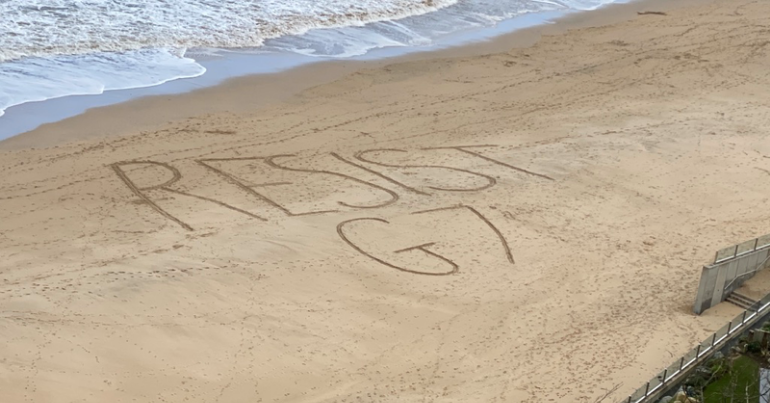 The Resist G7 coalition have accused Cornwall and Devon police of trying to repress protest after attempts to control demonstration sites and intimidate activists.

The coalition announced three days of action from 11-13 June, to coincide with the arrival of world leaders to Cornwall for the G7 summit. The coalition is calling for climate justice, international equality and an end to repression and surveillance.

However, Resist G7 and Extinction Rebellion, who are also organising protests around the summit, have expressed concerns about the policing of the protests given the police are designating sites for demonstrations that will not be seen by those attending the summit.

The UK is hosting the G7 summit at Carbis Bay Hotel near St Ives. There will be 6,500 police officers at the summit with 5,000 drafted in from other areas.

The choice of Lemon Quay was particularly unpopular as it meant the cancellation of the Truro Farmers’ Market. Both XR and Resist G7 issued statements saying they supported the market and had no plans to protest in Turro anyway. Police eventually overturned the decision to designate the site for protest, and reduced the space allocated in Falmouth.

Resist G7 has called on protestors to boycott the police-approved sites. A spokesperson for the group said:

“We didn’t think the choice of protest sites could get any worse. But instead of listening to the concerns of protesters, the police have relegated to protest to an out of the way park and half a car park.

Protesters voices will not be heard in either of these locations. Although we don’t plan to go to Truro, and are fully in support of the farmers’ market opening, we are outraged and disgusted that the police think a park is a suitable venue for a protest against the G7.

The group also accused the police of trying to “repress protest”:

The police are actively trying to repress protest. They’re attempting to play a PR game, giving interviews saying they support the right to protest. But they’re forgetting a fundamental point about the point of demonstrations. As the UN Human Rights Committee said in 2020, protests ‘should not be relegated to remote areas where they cannot effectively capture the attention of those who are being addressed’.

We have serious concerns the police will use the provision of these sites to justify violence against protesters who refuse to use them. However, we will not be intimidated by their tactics and we will not be silenced. The G7 is not welcome in Cornwall and we will make sure that message is heard.

We are committed to working with partners, local communities and protest groups to ensure that people can exercise their right to peaceful protest in relation to the G7 Leader’s Summit in Cornwall next month.

As part of the planning process, police and partner agencies identified a number of possible locations where protest could take place in a safe manner. In considering these locations, the impact on communities and businesses was a significant factor.

Meanwhile, a Cornwall G7 activist said police visited his home and workplace last week without a warrant, leading him to file an official complaint.

Rob Higgs is the founder of climate group Ocean Rebellion and a theatre props maker. He said officers told him police would arrest him if he did anything to disrupt the G7 summit. This was despite Higgs saying Ocean Rebellion is “entirely peaceful” and “completely lawful” in its actions. Higgs told Cornwall Live:

They searched the premises without any warrants, interviewing all my neighbours and tenants, asking about me, what I do and telling people at the boatyard that I am a ‘person of interest’.

“I’m very saddened as it’s heavy-handed and their actions are stifling and intimidating the right to peaceful protest.

The Resist G7 Coalition also spoke out against the “intimidatory tactics” used by the police:

The police are making it clear that they will clamp down on any protest that isn’t in one of their protest areas. This is not acceptable. We will make our voices heard. This type of intimidation will not scare us and we will not be silenced. And it is this sort of behaviour that shows why we, as a coalition, will not be be talking to the police.

The police are not interested in facilitating protest, they are only interested in criminalising and gathering intelligence on those who want to protest.