Palestinians are holding a general strike tomorrow, and calling on us to join them - Canary 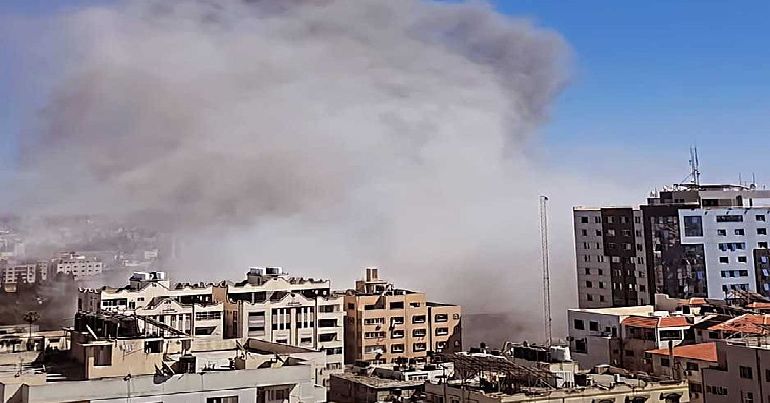 Palestinians are holding a general strike tomorrow – Tuesday 18 May – across historic Palestine.

The general strike is against the ongoing Israeli attacks on the Palestinian people.

Who Profits?, an independent information centre tweeted about the potential power of the strike:

The Palestinian people have declared a general strike tomorrow in all of historic Palestine.
We at Who Profits are in complete support of the strike! This is some info the strength of the strike. See thread for more. pic.twitter.com/8GK92fhafC

The Israeli military is currently bombing the Gaza Strip. On 16 May the Palestinian Center for Human Rights reported that 181 Palestinians had been killed since the beginning of the current assault last week, including 52 children.

On the morning of 17 May the Israeli airforce hit Gaza City. According to the Independent Middle East Media Centre (IMEMC):

The Israeli army is carrying out an extensive bombing attack on various parts of the Gaza Strip, in more than a hundred airstrikes at the time of this report.

Media sources said the army bombed dozens of homes, buildings, structures, public facilities, and even roads across the coastal region.

They added that medical and rescue teams are facing numerous challenges in reaching the bombarded areas, especially after the army fired missiles at many roads, including those near hospitals.

These airstrikes have heartbreaking consequences. One strike on 16 May killed four children and their mother. AFP tweeted this chilling interview with Abu Anas, a family member:

Israel has carried out three major assaults on Gaza since 2009, killing 3,760 people. In total, Israeli forces have killed nearly 10,000 Palestinians since 2000.

Palestinians are calling for their international supporters to take to the streets in solidarity on 18 May.

From across colonized Palestine, we call on you to join our general strike and day of action on Tuesday, May 18.

❗️DAY OF ACTION IN SOLIDARITY WITH THE PALESTINIAN UPRISING & GENERAL STRIKE❗️

From across colonized Palestine, we call on you to join our general strike and day of action on Tuesday, May 18. pic.twitter.com/8MhOKAYU9n

Tomorrow (18/05) we strike for Palestine! Liberation is within our reach! Within our lifetime!

A moment of unity across all of Palestine

People are rising up against Israeli oppression across all of Palestine. One Palestinian comrade from the West Bank told The Canary on 14 May:

What’s happening now in Palestine actually, it’s the first time I have seen it. It’s not like the Second Intifada [the massive uprising which began in 2002], it’s even more. Because [now] people from ’48 [the name often given to the territories seized in 1948, that now lie within the borders of Israel] are doing demonstrations and they are struggling against the Israeli police and settlers.

That unity of resistance against colonisation can be seen in the events in Lydd (Lod in Hebrew) over the weekend. Lydd is a city within the borders of Israel. It used to be a majority Palestinian city, but Zionist ethnic cleansing and systematic discrimination have made Palestinians a minority.

Palestinian residents of Lydd began rising up in solidarity with their comrades in Jerusalem on May 10. That same day Moussa Hassouna was shot dead by an Israeli settler. An uprising followed, in the face of extreme violence from far right Israeli colonists.

As of Monday 17 May a state of emergency is in place in Lydd. But Palestinians remain defiantly on the streets. According to IMEMC:

On Monday morning, Palestinian residents of Lod began a march through the center of the city to demand an end to the violence perpetrated against them by Israeli ultra-nationalist gangs and by the Israeli police.

There have been numerous reports of street violence and vandalism over the past week directed at the Palestinian community in Lod. The city used to be a majority Palestinian town, but is now 70 percent Jewish Israelis and 30 percent predominantly Christian and Muslim Palestinian with Israeli citizenship.

Palestinians with Israeli citizenship face discrimination in housing, judicial and educational sectors, as well as freedom of movement and travel, to name a few.

Events in Lydd have been mirrored in other Palestinian towns inside Israel’s borders, including Ramla, Yafa (Jaffa), Haifa and Nazareth.

The general strike is another example of that unity against oppression. Its time for supporters of Palestine everywhere to take to the streets in solidarity with the courage and defiance of the Palestinian people.

Palestinians are calling on their supporters to:

1) Host an action at the Israeli embassy or consulate in your region
2) Hold a protest of vigil for Palestinians killed by Israeli terror.
3) Make a public commitment to Palestinian liberation and BDS.
4) Call on your governments to place sanctions on Israel.