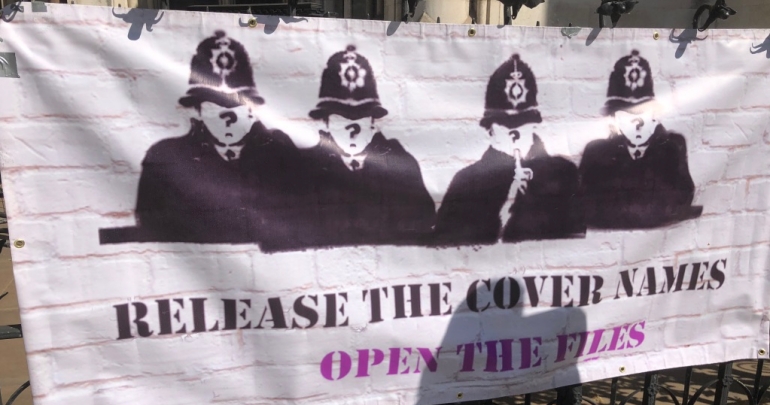 The latest set of hearings of the Undercover Policing Inquiry concluded on 13 May, but victims of police spies have expressed their anger at what is a farcical, excruciatingly slow “cover-up”.

Beginning six years ago, the inquiry was set up to investigate the actions of police spies since 1968, as well as the units that ordered the officers to spy. Fraught with delays and deliberate obstruction by the police, it’s set to become one of the longest inquiries in British history. Vital police files are being withheld from the victims who were spied upon.

Towards the end of April, the inquiry announced that the next set of hearings, which will continue to cover the period of 1968-1982, won’t take place until 2022. For the victims who were spied upon in the 2000s, this means it will be 2025 before they give their evidence: a full decade after the inquiry began.

Canary editor Emily Apple was spied upon by undercover police officer Jason Bishop between 2001 and 2005, while involved in anti-militarist activism. She is one of the inquiry’s many core participants still waiting to receive files from the police which would, potentially, show her exactly what information Bishop gave to his bosses.

She said that the news of further delays is “deeply traumatic” and argued:

So far the inquiry only seems to care about the distress the inquiry has caused to undercover cops, not to us, the actual victims of police spying. Not knowing what my files say, or when they will be released is a continuing nightmare. I know it’ll be a traumatic experience to read what the police hold on me, especially relating to the officers who I know were spying on me when my child was young and coming with me to meetings and protests.

Apple went on to talk about the massive effect that undercover policing has on a victim’s mental health. She said:

I already suffer from PTSD as a result of policing. This delay only exacerbates this. I know that I was spied on since at least 2000 by numerous spycops, but it’s going to be at least 2025 – and probably later – that I’ll get to understand why this happened. This will be at least ten years since the inquiry was set up.

This is disgusting behaviour from the inquiry that totally ignores the trauma that core participants have faced not only since the inquiry started, but since we first learned the depth of the spying operation against us through the work of activists and journalists.

There are hundreds of victims like Apple, who have become friends with undercover officers. They have trusted them, let them into their homes, and allowed them to spend time with their families. And there are more than thirty women who have been deceived into romantic relationships with undercover cops and systematically abused by the police. The inquiry should by putting these victims first. Yet time and again it shows that protecting the police is its priority.

Apple went on to say:

It is us, the people who were spied on who are the victims in this inquiry and we are being treated with utter contempt.

The inquiry will continue to plod on at snail’s-pace, but not until 2022. We have watched as it continues to protect the anonymity of the undercover police who abused women. And we have seen how it glosses over police corruption. Meanwhile, the evidence that has been heard has shown that the police’s intelligence-gathering is extremely flawed.

The inquiry has had six years to gather evidence. Apple and other core participants are demanding that their files are immediately released so that they can begin to reclaim their lives. This is the very least the state can do.