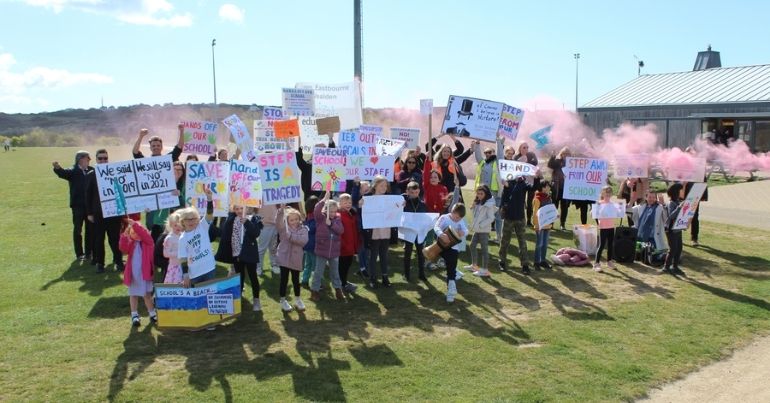 Community campaigners are fighting back against attempts to turn their Sussex primary school into an academy.

NEU members will go on strike next week to protest the Interim Executive Board’s (IEB) decision to apply for an academy order for Peacehaven Heights primary school.

The IEB has applied for an order despite consultation on turning the school into an academy not having begun.

Campaigners are also calling for East Sussex County Council to reinstate a local governing body to decide the future of the school.

Ofsted inspections of Peacehaven Heights in 2014 and 2020 rated the school as requiring improvement. The school has not had a permanent headteacher in the last five years.

The previous governing body of the school explored academisation as a solution, but rejected it, and were later sacked. East Sussex County Council then imposed the IEB to run the school in 2019.

Previous strikes, protests, and parent letters to the IEB got the consultation on academy status pushed back to the autumn term. However, with the recent announcement that the IEB had applied for an academy order, campaigners decided fresh action was needed.

The fact that they have applied for an academy order before any consultation is a joke. IEB chair Penny Gaunt has already told parents that it is a consultation and not a referendum, which suggests she’s not listening to parents, staff or the local community.

As a result, NEU members are taking strike action outside the school from 7:30am on 25 May. They will then head over to the County Hall in Lewes from 9am.

Phil Clarke, NEU branch secretary, said they had been considering suspending strike action to avoid disrupting children’s learning. He added that this changed when the IEB announced its application for an academy order:

the announcement by the IEB last week to push on with applying for an academy order when the level of community opposition is already clear, and consultation has not even begun, has destroyed any hope of a meaningful consultation taking place in the future.

With a heavy heart, our members are now prepared to take further strike action. East Sussex County Council can prevent this by simply re-instating a local governing body to decide the future of the school like any other local authority school and allowing that governing body to advertise for a permanent headteacher without delay. We have still not been given a straight answer as to why they can’t or won’t do this.

Many parents joined striking staff when they last took action on 5 May and are continuing to offer their support. Placards at the protest carried slogans such as “hands off our school” and “save our school”.

it has already been shown in 2019 that academisation is not in the best interests of the children at Peacehaven Heights and all the IEB have done is fail to recruit a permanent head teacher and concrete in the swimming pool.

Campaigners are hoping the newly elected local councillors will be able to persuade the council to reinstate a local governing body.

I’m disappointed that staff have been driven to a second day of strike action. Applying for an academy order before consulting not only shows a contempt for the process, but a total disregard for its potential outcome. It has never appeared clearer that it is currently council policy to force all our schools into academisation.

Yet again, I’m calling for East Sussex County Council to put a local governing body back in place. Any consultation can then be carried out by them in a transparent way that puts the best interests of the pupils first, rather than this headlong nose-dive into forced academisation.

Figures from 2019 show that more than 300 primary schools across England were forced to become academies over the previous three years. There is growing evidence that many of these schools are passed around academy trusts with their futures unstable and uncertain.