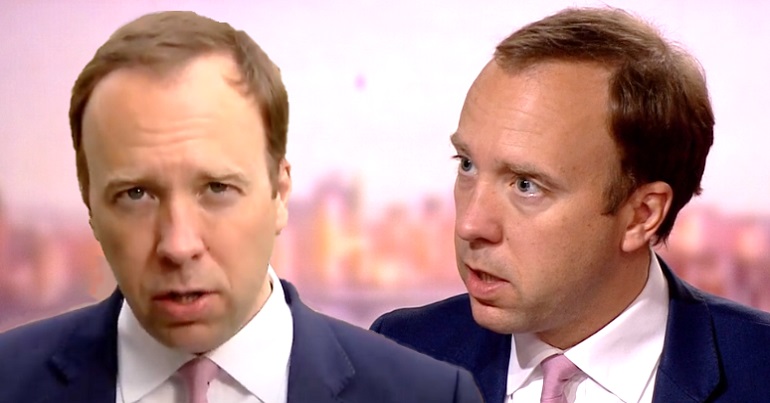 Health secretary Matt Hancock did the morning TV rounds on Sunday 16 May. And like the good Tory minister he is, he weaselled his way through most of it.

First up, and Hancock was on Sophy Ridge on Sunday. People are becoming worried about the so-called ‘Indian variant’ of coronavirus (Covid-19). SAGE has warned the variant may be 50% more transmissible than the Kent strain. But the government is still planning on easing lockdown restrictions further on Monday 17 May. So, Ridge put this to Hancock. His response was effectively to shrug his shoulders. Hancock said of the situation:

The thing is, though, Sophy, and I know that you get this; it’s often quite hard to communicate

Clearly, us plebs don’t understand the pandemic in the way Ridge does, then?

Then said ’I know you understand’ but it’s hard to communicate this message, so now we’re too stupid to understand big words👍#JohnsonVariant #BBCBreakfast #marr #ridge #ToryCovidCatastrophe pic.twitter.com/TFmJFaiWlz

Epidemiology is all about the balance of risk. And there are no absolutes. … If the transmissibility is as high as that [50%], then we will have a problem – and we’ve been totally frank with people… But it may be that the transmissibility… is much lower. And in that case, there will be almost no impact on our roadmap

.@SophyRidgeSky: "SAGE are very worried about tomorrow – why are we going ahead?"

If the Indian variant is 50% more transmissible "we have a problem" – but it may be lower – "we just don’t yet know", says Health Secretary @MattHancock.

He then seemed to cast doubt on whether the government’s ‘roadmap’ out of the pandemic was going to stay on track anyway.  Because Hancock ‘wouldn’t rule out’ local lockdowns if needed.

'Could we see areas of the UK, with high #COVID19 incidences, have different restrictions to elsewhere?'

"We won't rule that out" says @MattHancock, adding that the govt is currently "piling up" testing in Bolton and Blackburn to manage outbreak.#Ridge: https://t.co/3tZ5MrLvaA pic.twitter.com/3DGypUBhtG

So, should the public be worried or not? Who knows.

#Ridge – Why doesn't Boris Johnson just buy tthings that he can pay for & afford?

Matt Hancock – There's so many more important things..#Ridge – So journalists shouldn't ask politicians about whether or not Boris Johnson has broken rules… that doesn't matter?#Marr pic.twitter.com/p3qqJtnvlx

Then, Hancock slithered over to the BBC for the Andrew Marr Show. Here, he said the Indian variant “does appear to transmit more easily from person to person”:

#Marr: Is the Indian Covid variant under control?

Health Secretary Matt Hancock: "The whole pandemic is currently under control… it does appear to transmit more easily from person to person, we have to be careful"https://t.co/4sTXZynImq pic.twitter.com/jlR056TvxM

Not the case. Labour, scientists and journalists were all asking those questions at the time. #Marr

Then, Hancock dodged questions about the scandal over Tory corruption and government contracts. Apparently, when former ministers emailed him begging for government cash, he just “pinged” them on:

#marr – Was it appropriate for the former minister, Brooks Newmark, to lobby you for a contract worth hundreds of millions of pounds?

Matt Hancock – Yes, it was absolutely appropriate… #Marr – it just looks like you get preferential treatment..#Ridge pic.twitter.com/fa3qrMOat5

He also claimed there was no shortage of PPE during the height of the pandemic. But as one person tweeted, NHS staff who are taking the government to court over a shortage of PPE would disagree:

“There was no national shortage of PPE” Matt Hancock on #Marr. How strange they are taking the govt to court on Monday. https://t.co/u3Wl9ogMdU

So, what have we learned from Hancock’s media appearances on 16 May? Very little about whether or not the government has a grip on the pandemic after 14 months But we did learn that the prerequisite to be a Tory minister is the ability to weasel your way through any difficult questions.