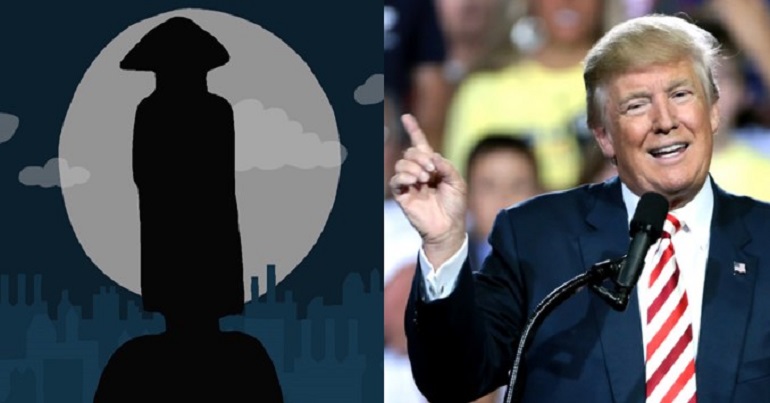 An artist who is known for being ‘angry’ has just released his latest work. In something of a departure from his last piece, he uses animation and spoken word to take aim at the current political climate, filled with arrogant, pompous men like Donald Trump. But he uses the historical figure of Horatio Nelson to make his point.

Angry. But in a good way.

‘Angry Dan‘ is an accomplished artist, musician and poet. From his devastating twist on the Louis Armstrong now-standard What a Wonderful World, where he reimagines the song as an anti-nuclear track called This Is The End Of The World, to producing poetry and art work, he is a varied and eclectic talent.

Stripped-back tracks like Why Don’t You Go On The Internet? combine Dan’s husky vocals with a conversational piano accompaniment, to create music reminiscent of The Beautiful South. And Dan’s style works so well because his masterful storytelling makes the listener feel like they are almost having a conversation in a pub with him:

But now he’s combined his talent for animation with his lyrical versatility to create The Man Who Stood Still Forever; a spoken word piece set to animation. So The Canary caught up with Dan to discuss Nelson, Trump and post-truth politics.

The Man Who Stood Still Forever tells the story of a mythical man’s epic delusions of grandeur, and his chance encounter with a forthright cockney pigeon. The connotations of Nelson’s Column in London are obvious, but Dan told The Canary it runs deeper than that:

It’s about a man who’s had a troubled life. He’s walked miles from home to get away from it all and ends up catatonic on top of a hill. Eventually, he invents a new existence for himself which, in a way, becomes true. I’ve always been fascinated with the idea of false memories and how people choose to frame things, years after the fact, so they can more easily accept them. This has always been the case on a societal level with war, and is especially relevant in this post­-truth era.

“Post-truth” is a relatively new expression, described by the Oxford Dictionaries as:

But as Dan implied it has always existed.

Post-truth, then and now

So, using Nelson as a hook, he gives us the story of a man who on the face of it is a late-Georgian Naval figure, but could equally be Trump or Nigel Farage. The character is portrayed, as Dan describes, as a boastful, pompous man who considers himself to have done great things with his life. And yet he can’t understand why the public doesn’t revel in his glory.

Sam Rix narrates The Man Who Stood Still Forever. In it, Nelson’s character says, in response to the pigeon’s question about why he’s standing on his ‘column’:

He told him of the wars he’d waged, his mind so resolute;

The glory of his limbs of stone once held in disrepute;

And now the people of the town admired his stance, so solemn;

With their taxi cabs and buses driving round his mighty column.

The Man Who Stood Still Forever is a departure from Dan’s last work, This Is The End Of The World. But Dan believes it is important for him to remain diverse as an artist:

I wanted to show that I could write something of substance that didn’t need a nice melody or piano accompaniment. I’ve written more than a hundred limericks in the past couple of years, and I illustrate them for my Instagram. I absolutely love trying to fit an idea into five neat little lines, but after focusing on those for quite some time I felt like I’d learnt a lot, and was itching to write something longer.

The parallels in the piece between Nelson and figures like Trump and Farage are clear. But Dan said that the idea for The Man Who Stood Still Forever came to him in a rather peculiar way:

This is going to sound pretentious, but the idea came from a dream. I woke up with the first line going ’round and ’round in my head, picked up my notebook and immediately started writing. As the verses developed it became clear that Nelson was going to be a bit of a blowhard, and that this had connotations within the current political climate.

But with the current political climate, Dan believes the Nelson/Trump comparison he makes is an important one.

If nobody really understands Trump, and Trump is politics, then I think it’s fair to say that we don’t really understand politics. Is he intelligent, or an idiot? A little doolally, or completely insane? One thing we can all agree on is that Trump has changed the game. Reading the excerpts from Michael Wolff’s ‘Fire and Fury’, you’d think he never intended to win. Either way, no campaign will ever be run the same way again.

Nelson/Trump: nothing new under the sun

Dan hopes the audience will take away a valuable lesson about the post-truth, fake news political world we live in today, and how history often repeats itself:

One day, in my childhood, I remember I was arguing with someone. I was absolutely sure that something was true, as I had witnessed it, but they were sure that it wasn’t. Somehow, right there, it was proven I was wrong and they were right. The thing was, I had been positively certain. That was the day I learnt that I had the capacity to create false memories. I can’t remember for the life of me who I was with or what we were arguing about; I only remember the lesson. Or maybe I made that up, too. Who knows.

The Man Who Stood Still Forever is a clever, at times amusing, but powerful piece of spoken word and animation. Dan’s skilled use of comparative history lends itself well to a broader statement. It shows how some present day politicians create their own history and mould the narrative of the rest of us in order to fit a given agenda. In an age where post-truth and fake news dominate, The Man Who Stood Still Forever serves as a pertinent reminder that, essentially, there’s nothing new under the sun.