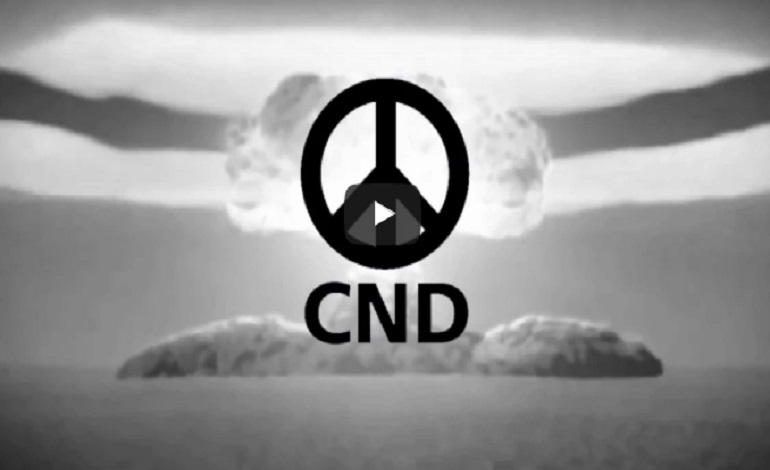 The artist behind the Superman-themed Jeremy Corbyn t-shirts has just released the must-hear song of the summer. But, far from being an uplifting party anthem, the track gives us a devastating message. One that has never been more needed.

The end of the world?

The Campaign for Nuclear Disarmament (CND) has teamed up with artist Angry Dan to release an anti-nuclear track. Simple in its production, it pulls no punches in giving the listener their thoughts on the very real threat of nuclear war. The Canary spoke to Dan about the track, and the current political climate more broadly.

The song, This Is The End Of The World is based on Louis Armstrong’s now-standard What a Wonderful World. But Dan gives the classic a devastating twist:

Dan told The Canary he chose the Armstrong track because of the contradiction between what it depicts, and what the reality of a nuclear war would be like:

The original lyrics are a perfectly simple depiction of the beauty of the human experience; how it feels to be in nature, the love between us, and the miracle of life. The sad fact is, if we do descend into nuclear war, that’s precisely what we’ll lose. The track was recorded in one take with a dictaphone in my living room. I tried re-recording it properly but, as is often the case, you lose as much as you gain in overcomplicating these things.

As The Canary has been documenting, the situation between Donald Trump’s US administration and North Korea has been escalating recently.

Currently, the US and North Korea are in a political and military stand-off that has been developing for months. In April, Trump ramped up the pressure first by threatening intervention and then by sending the USS Carl Vinson to the western Pacific. Meanwhile, Kim Jong-un has allegedly been increasing the number of missile tests, with reports speculating that North Korea has now developed nuclear warheads small enough to fit in a missile.

This has led Trump to use particularly strong rhetoric, at one point warning that the US would unleash “fire and fury” on North Korea. Consequently, Jong-un was reportedly considering firing missiles towards the US territory of Guam in the Pacific Ocean. And while the situation currently appears to have de-escalated, the threat from both sides is never far away.

Dan wouldn’t be drawn on how real the current threat of nuclear war is. But he told The Canary he was clear in his appraisal of the situation more broadly; especially regarding UK PM Theresa May:

A nuclear deterrent relies on the assertion that you’re willing to use it, so it’s impossible to know what anyone is really thinking. Lots of people were shocked when Theresa May said that she’d be prepared to launch a retaliatory strike, but that’s exactly what she’s supposed to say. Whether she’d actually do it or not is almost irrelevant, because it’ll be too late. It’s beyond absurd.

It was the escalating situation between the US and North Korea, and the other nuclear powers’ lapse response, that drove Dan and CND to release This is the End of the World. But CND has been vocal in its opposition to nuclear weapons since its inception in 1958. And on 19 August it is holding a protest outside the US Embassy, in conjunction with the Stand Up To Trump campaign. Its goal is to “stop Trump’s drive for nuclear war”. CND is also collecting signatures for an open letter to May, asking her to take action over the current US/North Korea situation.

This Is The End Of The World is the perfect accompaniment to the protest. Sparse in both its instrumental composition and its production, the track hints at the desolation a nuclear war would create. But listening to Dan’s other work, it is clear that a stripped-back style is what he favours. He told The Canary that growing up he preferred listening to artist’s acoustic B-sides on records. But he says, with his music, “it’s all about the words”. Dan believes the piano is “the most honest accompaniment” to lyrics, “especially if you’re trying to tell a story”.

He says that he was never formally trained in music but showed a keen interest when he was younger. He said:

I never had music lessons. I’ve made music on the computer since my teens and I’ve always written songs on guitar. My friend, Dan, left his piano at my house so I gave him some money for it. I was writing short stories and poems, and recently that’s translated into more narrative songwriting. I’ve got this new one that’s from the perspective of a bullied child who, in order to deal with the trauma, recedes into his imagination. I’ve played it live a few times but I haven’t recorded it yet.

Angry Dan is an accomplished musician. Stripped-back tracks like Why Don’t You Go On The Internet? combine Dan’s husky vocals with a conversational piano accompaniment, to create music which is reminiscent of The Beautiful South. And Dan’s style works so well because his masterful storytelling makes the listener feel like they are almost having a conversation in a pub with him:

He also produces poetry and art work, and is available for commissions. But, somewhat oddly, it’s not music and words that he’s most well known for.

Dan created a storm in 2016 with the Superman-themed Corbyn t-shirts he created: 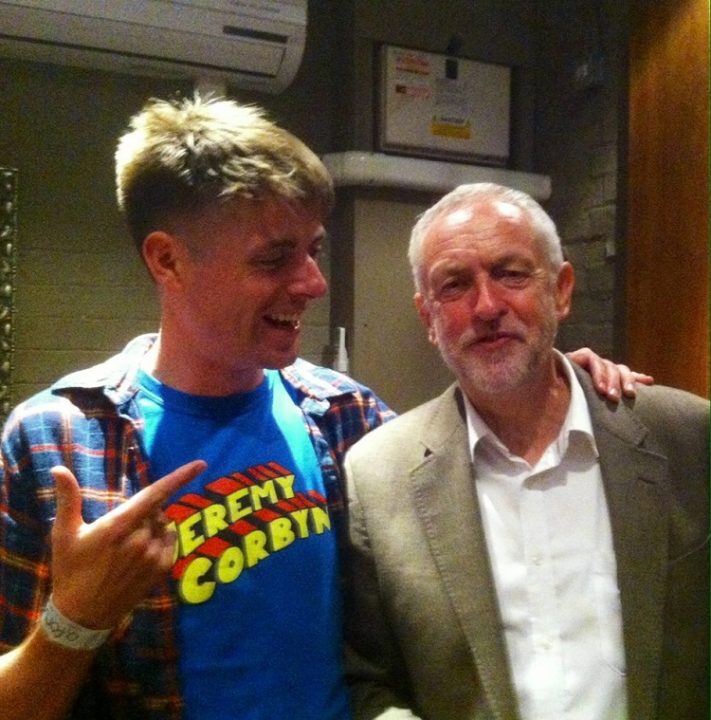 The t-shirts caused controversy when The Mail on Sunday made claims about them. Dan gave a full rebuttal of The Mail’s caccusations in The Huffington Post. And he told The Canary:

Hats off to the Mail on Sunday. They did a great job. Most people still assume that Jeremy Corbyn branded t-shirts were coming straight off the production line in Bangladesh. In reality, those shirts have only ever been printed in London under my instruction. Corbyn had nothing to do with it. The journalist must have taken the shirts on the flight just to take those pictures. My friend, Tommy, rang the guy, Ben Ellery, to give him what for. Apparently, he turned super solemn on the phone, talking about the poverty he saw in Dhaka, like the article was nothing but a saintly act. I approached a few national papers about setting the record straight but, after studying the Mail’s article, they all said it was so craftily worded to strongly imply the shirts were printed out there, without ever stating it outright.

Needed now, more than ever

But its tracks like This Is The End Of The World where Dan comes into his own. And he also has nothing but praise for CND, noting how important its work is:

It’s easy to get caught up in the paradoxical argument surrounding nuclear weapons when, in fact, it can be boiled down to one very simple assumption: if we all have lots of nuclear weapons then, one day, sure as eggs are eggs, somebody is going to press that button and we will all be dead. Therefore, the voice of reason says we must strive to rid the world of nuclear weapons. CND is that voice.

The threat of nuclear war has been omnipresent for decades. But the continuing friction between the US and North Korea puts the world on a knife edge. So having groups like CND active in civil society has never been more important. And with artists like Angry Dan supporting the anti-nuclear campaign, hopefully, one day, we can actually live in Armstrong’s original vision of a “wonderful world”.

This article was updated at 7.45pm on 18 August to reflect a request by the artist.

– Support CND, sign its anti-nuclear letter to May and find out more about Angry Dan.