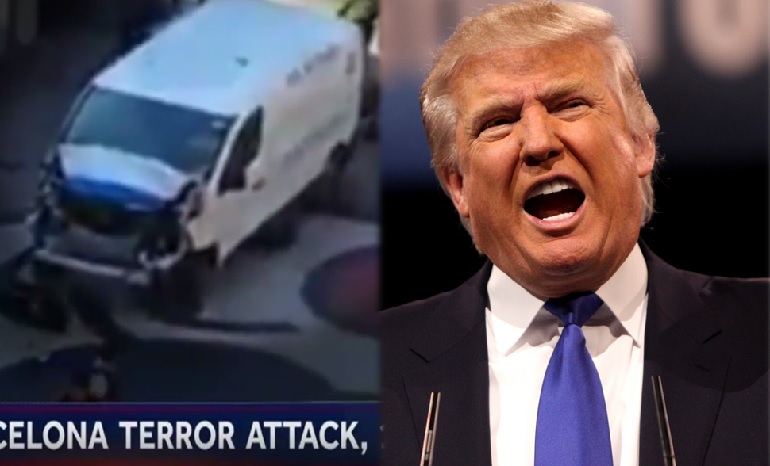 In a week where he’d already courted controversy for essentially comparing fascists to anti-fascists, US President Donald Trump made another blunder. And it came at the worst possible time, after the horrific terrorist attack in Barcelona. The media, however, gave only a half-hearted critique of Trump. So here’s the vital information they missed out.

The US President began with a standard condemnation of the terrorist attack. But he soon followed up with an attack on the courts, his Democratic opponents, and this:

Study what General Pershing of the United States did to terrorists when caught. There was no more Radical Islamic Terror for 35 years!

In the above tweet, he was resurrecting an old myth which he’d shared on the 2016 campaign trail. He’d claimed that, in the Philippines in the early 20th century, a US general had dipped bullets in pigs’ blood and shot Muslim rebels. This, he said, prevented resistance for years to come. The problem was that Politifact, having spoken to numerous experts, rated Trump’s claims “pants on fire”. Apart from the fact that uprisings against the US in the Philippines came in a context of US occupation rather than a context of terrorism, Politifact called Trump’s story a “dubious legend”. Yet he’s now told it again anyway.

What the media missed

From the BBC to CNN, and from Fox News to The Independent, media outlets around the world stressed that Trump had tweeted a ‘debunked myth’. But what they failed to do was counter his argument effectively. Because his suggestion was essentially that, by using bullets dipped in pig blood, the world could somehow get rid of modern-day jihadi terrorism. And that was an assertion the media could and should have challenged more robustly.

Modern-day jihadi terrorism is not a phenomenon with a direct parallel to another point in history. It’s very much a product of several complex political factors from recent decades. And it’s definitely not a result of Western forces no longer using pig bullets, as Trump’s tweet seems to suggest.

The real foreign policy issues that have contributed to today’s situation are:

The CIA-backed coup in Iran in 1953 is a good place to start. As author Mark Gasiorowski says, “What the coup did was to take out the moderate, secular, element of Iranian politics and enabled radical Islamists”. In fact, as author of Secret Affairs: Britain’s Collusion with Radical Islam Mark Curtis insists, Britain actually manipulated radical Islamist forces to “counter the threat to British interests” from secular progressives.

1980s Afghanistan was a similar case. Here, the CIA backed jihadi fighters in order to defeat secular forces supported by the USSR; and Osama bin Laden was one of the extremists to benefit from that environment.

Meanwhile, Pulitzer prize-winning journalist Steve Coll (author of Ghost Wars: The Secret History of the CIA, Afghanistan, and Bin Laden, from the Soviet Invasion to September 10, 2001) even claims Britain once supported the Muslim Brotherhood to challenge secular progressives in Egypt; and that Israel once covertly supported Hamas in order to weaken secular Palestinian forces.

In more recent years, we all know what’s happened as a result of Western military intervention in Afghanistan, Iraq and Libya. Not to mention the meddling that’s gone on in Syria.

The words ‘fuel’ and ‘fire’ come to mind.

3) Western support for regimes in Saudi Arabia, Israel, and Turkey

Whatever the geopolitical reasons for Western support of these regimes, they’ve all helped (directly or indirectly) with the spread of ultra-conservative terror and the perpetuation of conflict in the Middle East.

Riyadh, for example, has long used billions of its petrodollars to spread its extreme state ideology of Wahhabism around the world. The New Statesman has insisted that “the narrowness of the Wahhabi vision is a fertile soil in which extremism can flourish”. And it’s no coincidence that both al-Qaeda and Daesh follow this ideology (one senior Qatari official has even claimed the latter began as “a Saudi project“). The West needs to acknowledge and accept the significant role that Saudi Arabia reportedly plays in spreading extremism; but it consistently refuses to do so – mainly for economic reasons (i.e. oil).

Meanwhile, the West’s fight against international condemnation of Israeli apartheid continues to give the impression that we don’t really care about human rights in the Middle East. And putting arms deals before democracy in Turkey allows its increasingly authoritarian regime to keep undermining the fight against Daesh.

As The Canary has insisted previously, there are a number of serious issues (on both national and international fronts) that countries need to address in the wake of horrific terrorist attacks. And media tip-toeing around the context which has left us where we are today does every one of us (including the victims of terror) a great injustice.

We’re not facing a jihadi terrorist threat today because we stopped using pig bullets. But nor has the threat come out of a political vacuum.

The press has a vital duty to inform the world. But it’s currently failing to do so. We deserve so much better.

– Ask Theresa May and your MP to tell us the whole truth about the funding behind extremist groups. And ask them to hold all human rights abusers to account – whether they’re allies or enemies.

– Support The Canary if you appreciate the work we do. Also see more Canary articles on Saudi Arabia, Israel, Turkey, and the arms trade; and for more Global articles, follow us on Facebook and Twitter.