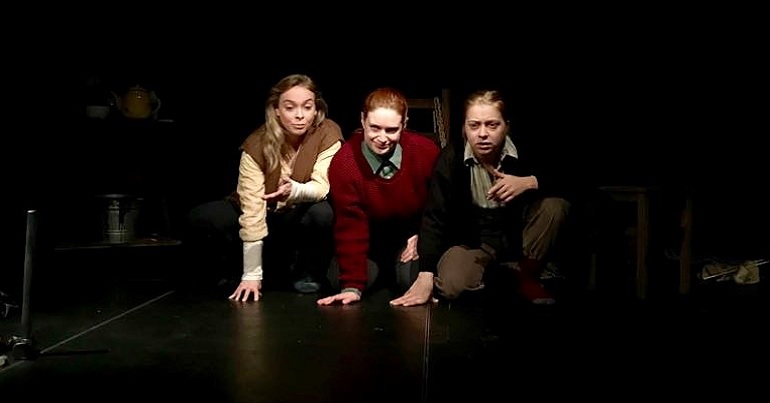 WARNING: THIS ARTICLE CONTAINS REFERENCES TO PEOPLE TAKING THEIR OWN LIVES, WHICH MAY UPSET SOME READERS

A play by a Chilean writer, first released over thirty years ago, was just brought back to life for the 21st century. It only had a short run, but its very relevant modern day message should be heard for much longer.

Las Brutas is a play from 1981 by the late Chilean playwright Juan Radrigán. Translated into English as Beasts, it tells the true story of three indigenous Chilean sisters who, in 1974, were found hanged from a rock in an apparent suicide pact. The nature of their deaths is steeped in mystery. The sisters Justa, Lucía and Luciana Quispe Cardozo, reportedly took their own lives after cleaning their house and slaughtering their animals. As elmostrador reported [translated from Spanish], their bodies were “joined together by a complicated, labyrinthine and almost ceremonial system of knots and rope”.

Rumours about the sisters’ deaths circulated. Did Pinochet’s regime execute them for helping fugitives? Or was it a ritualistic suicide? According to Educar Chile, Radrigán concluded that [translated from Spanish]:

the women were driven to despair upon being confronted with the harshness of the environment and the loneliness, and instead of dying frozen and starving, they decided to commit suicide.

So, in Beasts, Radrigán explores what he thinks led to the sisters’ deaths. It’s this exploration which makes the play relevant now. And it has just finished a two-performance run at the Outcast festival, held at the Bread and Roses Theatre, London. The Canary caught up with Coco Maertens, who played Lucía, to talk Pinochet, marginalisation and what we can learn from the devastating story of three Chilean sisters, all those years ago.

Maertens says before being cast in Beasts, she was actually looking to perform in something by Anton Chekhov; a writer whose subject matter and its undertones are not dissimilar to Radrigán’s:

Chekhov writes about the kinds of torn people, suspended between new and old, which brings out these gut-level responses in human beings. When I got offered the part for Beasts and read the full script I knew this was the thing I was looking for. It’s such a bleak story. But the language, rhythm and way the subject matter is handled is so unapologetic, innocent, funny, hard and all the things that humans are when they make up their minds, that you can’t help but be with them. At least that’s how I felt when I first read it.

“Innocent” and “hard” sum up the three sisters and their lives as Radrigán wrote them. They lived as goat herders in a mountain hut on the Andes. Illiterate and with no access to the outside world, their community slowly shrunk due to drought and people moving away to find work in the cities. Eventually, only the three sisters remained, cut off from the rest of the world.

The three women have co-existed together, oblivious to progress and the wider world. So much so, that they cannot comprehend that in the cities there are now boxes that talk or branchless brooms that sweep or that you can capture ‘a piece of sun in a glass jar’.

Las Brutas was translated to Beasts by Catherine Boyle in 2011, originally with the sisters being not Chilean, but Irish. Now the characters are white Yorkshire women. But as Maertens explains, this was intentional by director Franzisca (Fran) Olivares. She told The Canary that their version was not necessarily intended to be faithful to Radrigán’s original. It’s a new version “that talks about something of our time”:

Fran explained that she purposely didn’t want to cast Hispanic actors. She didn’t want it to be a history play about a certain time in Chile, but about the human experience of isolation and what it means to be left behind by society.

Secondly, I don’t speak Spanish. But Fran (being Chilean) has a pretty good judgement on the accuracy of the translation. She felt that Catherine was able to capture Radrigán’s essence, the magic and real style innate to Latin American writers. And cleverly, she translated it to her Irish roots. So it was speaking from her heart, rather than just doing a literal translation. We ended up doing it in a Yorkshire accent as that seemed to be the most useful sound to reflect the character’s essence.

Olivares didn’t want Beasts to be about the politics of the world the sisters lived in. But it’s somewhat hard to avoid.

In the original Las Brutas, the sisters have a deep-rooted suspicion of the outside world. When a travelling salesman (the catalyst for their deaths) brings news of the regime’s actions, ‘Mr Government’ as they call it comes into their world and brings it crashing down. But ‘Mr Government’ and its effects are a secondary message in the play. As Maertens told The Canary:

I think the play does something really interesting in showing how decisions the authorities make impact everyone’s life, even in the most remote of places. There are always consequences and often the people with the least influence on the decisions suffer the most. But the play only talks a little about how this came about.

Beasts‘ overriding themes are isolation and marginalisation in society; ones which [translated from Spanish] run through Radrigán’s work. It’s the exploration of these which makes the play wholly relevant today. In an increasingly globalised and individualistic society, we are seeing more and more reports of whole communities being marginalised; from disabled people, to indigenous groups to Black, Asian and Minority Ethnic communities. So, Beasts tries to understand the effects of this ‘cutting off’ from the rest of society. But it also poses bigger questions about whether this is the kind of world we want to live in, and what, if anything, can be done about it.

Maertens said that the perpetual march of capitalism and globalisation plays some part in isolating whole communities; much like the sisters in Beasts:

Beasts shows the way society ignores people and leaves them behind; makes them invisible by lesser education and denies them access to being full members of society. There are very similar phenomena now, even though in the play the sisters’ naivete (in regards to what the world beyond their reach is like) is taken to the extreme. That interpretation may only be true for very small pockets of marginalised people in this country.

I think this isolation is often due to a lack of shared consciousness, where we don’t feel responsible beyond the bits of life each person touches individually. This trend definitely goes hand in hand with capitalism and maybe globalisation, but isn’t always the sole trigger.

Beasts is a devastating and timely play, and Olivares’ production drags it kicking and screaming into the 21st century. Slowly building the tension throughout, there’s almost an unwritten fatefulness about the sisters’ lives, which the audience knows. But it doesn’t make the claustrophobic and unnerving crescendo to the final, horrific act any less powerful. Maertens says that she hopes that Olivares’ version will be picked up by another theatre, because it “deserves another run”:

We are very keen to give the play more then two performances. It was great to be part of the Outcast festival, especially in regards to the beautiful network it provides. But we all feel the play, as well as the time and heart blood invested, deserves a proper run. I always feel like letting a role go is like saying goodbye to a dear friend. But with this one I think we all feel there is something of our time in it that needs telling; maybe especially because its political push is countered by such deep felt magic and connection to something quite ancient.

Beasts is a ballad not only for a historical period in Latin American history, but also for our time. As connections are more and more severed in society, Olivares’ work feels like a much needed piecing together of how communities get to a point of such disconnection. But ultimately, it starts a conversation about how we can stop this happening in the first place.