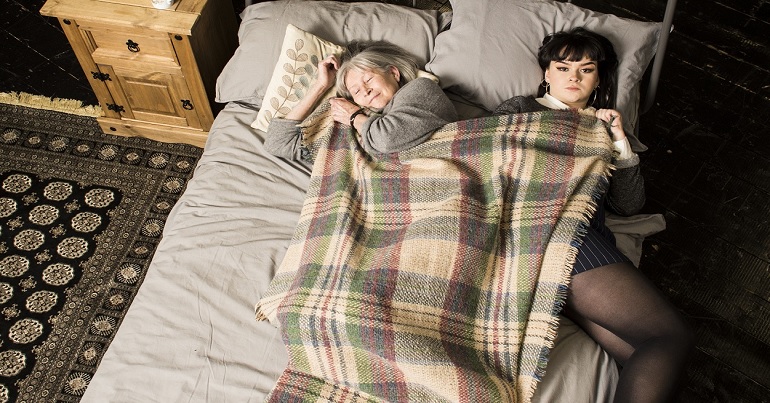 The National Youth Theatre is beginning a run of a critically acclaimed play on Saturday 28 April. And The Fall tackles one of the most pressing issues of our time – how society treats older people.

The Fall is a play by James Fritz. Having previously had a successful run at the Finborough Theatre in 2016, the National Youth Theatre returns with the production at the Southwark Playhouse from 28 April to 19 May. The Fall deals with society’s attitudes towards, and perceptions of, older people. It’s unflinching in its approach – mixing darkly comic humour with poignancy and palpable distress.

The Canary caught up with director Matt Harrison to discuss The Fall, society, and why we’re seeing an erosion of the values surrounding later life.

In The Fall, Fritz weaves three loosely connected stories together as separate scenes: First, Second and Third. First documents two young lovers who try to find a moment of privacy, not knowing the shocking experience they’ll have. Second charts decades in the life of a middle-aged married couple, who are juggling caring for an elderly relative with parenting. Third is set in the near-future around the lives of four people in a care home – struggling with the choice of euthanasia.

While the stories are different, the narrative is clear: it tackles a breakdown of societal structures, systems, and attitudes surrounding older people that we once took for granted. Harrison told The Canary that while one version of The Fall could have the same character playing key parts in each scene, the National Youth Theatre production avoids that:

If one actor played all the key parts in each third, a more linear narrative might be created. But as a company we were keen to avoid that. Instead, we wanted to create characters and stories in each act which seemed more separate, and therefore more universal. By focusing on these separate characters, each story can resonate like a pebble dropped into a pond, and it’s up to the audience to decide how strong the waves these pebbles create are between each act.

We made the choice to put in dance break transitions which stylistically feel very different to the rest of the piece. The way they undercut the scene and pop you out of the world of the play temporarily mean that, inevitably, each act feels quite distinct. They act as palate cleansers, allowing the audience to sit in the moment and consider the questions posed by each section, before the scene is reset like an etch-a-sketch.

The dance transitions add somewhat ironic interludes to The Fall. Peppered throughout the play are also some darkly comic moments, which add to the often devastating finales of each scene. In First the young man called ‘Boy’ notices the ‘smell of old men’ in the flat they are borrowing. So he decides to do some push ups on the bed, commenting that if his body ever looked like a man’s in his nineties, he’d “end it”. This wry aside leads into a horrific realisation for the couple, which hammers home a point about the naivety of the young.

The juxtaposition of comedy with other, more harrowing, elements is not an easy trick to pull off. Harrison told The Canary:

Finding the balance between tragedy and comedy is hugely important. Fritz does a lot of the heavy lifting with finding that balance with how precise and beautifully human the script feels. So my job as director is mainly collaborating with the company to bring about a truth which does the script justice. When directing, you find that truth is a delicate touch. It’s those 2% changes, those tiny tweaks, or that little bit of seasoning which help you get the balance right in a scene.

It’s important that the comic moments in the play don’t feel gratuitous, but equally it’s really important that those moments exist. When you’re tackling things that can feel huge and so far away from the individual it’s amazing when you can get a small but very real human reaction, like a laugh from an audience member – it reminds you of the truth of it all.

The play questions society’s treatment of older people. Perhaps the most hard-hitting aspect of this is in Third, where the four residents of a futuristic care home are offered, as routine, the choice of euthanasia. You see them being offered the opportunity to sign up (like some bizarre email newsletter) to have it all ended, ensuring that their children will be financially compensated. It’s this sense that older people are a secondary thought, a burden or a financial commodity which runs through the play. But these are issues also facing us as a society.

We need to have a conversation

Harrison agrees that the way we view older people has changed. He told The Canary:

We certainly need to have a conversation about the changing role of older people in society. Traditionally we see the older generation as intrinsically linked to the ‘grandparent’ role and therefore with childcare, and the passing on of stories and wisdom. Yet, the reality of a more geographically spread out society means that people are less closely linked with family members, whilst technological advances and an ageing population mean that my memory, when I’m elderly, isn’t going to be as reliable a testimony of my youth as my Facebook profile and photo archives might be.

As well as that, in a capitalist society we’re taught to link our value to our financial value but when you’re retired you’re not contributing financially to society, so we also need to ask ourselves what does that mean, and how does that effect how we view people?

There’s something very British about our current approach to ageing, death, and grief – we’re determined to tackle them privately, and our resistance to speaking openly about end of life care means it’s become a huge taboo. But the problem isn’t going to go away; the population is getting bigger, and growing older, so we need to tackle it front on. Only by being happier to talk about end of life care openly can we start to institute real change.

The Fall: a searing work

The Fall tackles these issues head on. The constant juxtaposing of young and old works well, and gives the audience repeated pause for thought over the issues the play tackles.

Harrison thinks that Fritz intended the audience to be left wanting to start a “conversation” about society’s relationship with older people:

By drawing a line between the actor on stage and who they will be in 60 years’ time we ask the audience to do the same for themselves. We’re at risk currently of there being an empathy breakdown between old and young. Through The Fall we want to rejuvenate this empathy, and to ask audience members to see each other as individuals rather than as an age.

Ultimately, we want to open up some frank and necessary conversations about how we manage end of life care, our ageing population, and vulnerable communities, and ensure that they don’t fall through the gaps in the ever-widening net of society.

That said, we also want people to have a laugh. To come out feeling full, knowing that they’ve shared this experience with other people and had a joyous time watching the show.

The Fall does all the above in droves. Smart, often funny, but shocking in its intensity, it’s a work of searing relevance to 21st century Britain. We have a lot of questions to ask and answer as a society. The Fall encapsulates many of both.

– Find out more about The Fall and book tickets.

Featured image via The Corner Shop