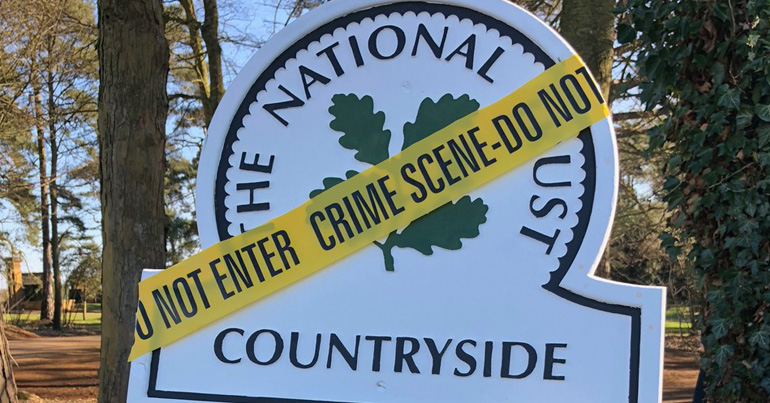 The National Trust conservation charity held a vote at its AGM to ban trail hunting in October 2017. The motion failed but anti-hunting campaigners are still holding the charity to account. And they’re doing so for good reason.

Trail hunting sees hounds following an artificially laid scent. It was created after the Hunting Act 2004 came into effect. Hunt saboteurs, monitors and anti-hunting campaigners claim it is a cover that allows the hunting of wildlife.

National Trust member Helen Beynon, tabled the October motion after being “appalled” at what she saw on one such trail hunt. But, although it failed, she and other campaigners are still pushing for hunting to be banned entirely.

On 24 April, Beynon published a statement about a meeting she and three other members had with two senior officials of the National Trust earlier in the month. In it, Beynon says:

the Trust does not appear to accept that its view, that the majority of hunts behave responsibly, is fatally undermined by the extensive evidence provided to it at all levels prior to the vote and by the experience of this season…

There are many documented allegations of abusive and sometimes illegal behaviour by hunts and their supporters, something the National Trust claims to consider in licensing decisions. And one notorious example is the Warwickshire Hunt.

Anti-hunt activists allege the Warwickshire Hunt hunted across National Trust estate Farnborough Hall on 13 November 2017. But this date doesn’t appear on the National Trust’s date of licences. And what appeared to be terriermen, who the National Trust says “have no practical purpose on a trail ‘hunt’”, were also photographed allegedly accompanying this hunt.

A few days earlier, a supporter of the Warwickshire Hunt attacked a member of West Midlands Hunt Saboteurs before pushing her to the ground. She attended hospital for her injuries. The attacker was later cautioned by the police. And this incident was described by Patrick Begg, the National Trust’s outdoor and natural resources director, as “serious and upsetting”.

The League Against Cruel Sports claimed on 30 March that:

Protect Our Wild Animals (POWA) describes ‘hunt havoc’ as “behaviour which causes nuisance, distress or danger to other people or their animals”. Allegations against the Warwickshire Hunt include:

The League Against Cruel Sports also notes that William Goffe, current huntsman for the Warwickshire Hunt, has been convicted under the Hunting Act. In 2008, monitors filmed Goffe – then huntsman for the Minehead Harriers – pursuing a fox.

Despite all this, the National Trust has licensed the Warwickshire Hunt to access Farnborough Hall twice a week during January and February 2018.

The National Trust states that hunts’ behaviour is a key consideration in granting a licence. It says “probing the track record of each applicant” is part of its updated approach to “further safeguard conservation and access”. But the Warwickshire Hunt’s track record doesn’t appear too clean.

The Canary has seen minutes of the April meeting between the National Trust and its anti-hunt members. Director general Hilary McGrady said the trust considers hunts’ behaviour on non-National Trust land but admitted it may not do so effectively. And Mark Harold, director of land and nature, said that a “higher than usual” number of transgressions onto the charity’s land have occurred since the AGM.

The minutes don’t show McGrady or Harold offering a response to questions about penalties for such transgressions. Instead, McGrady said she:

But it’s not just the Warwickshire Hunt whose actions appear to go against the National Trust’s own policies.

Not welcome yet unaccountable

Terriermen are traditionally used by fox hunts to block holes in the ground, preventing foxes from hiding in them. Terriers also force out foxes that have already ‘gone to ground’ before huntsmen shoot them or continue to hunt them. The National Trust rightfully recognises terriermen have no part to play in legal trail hunting.

But anti-hunt groups claim they’ve spotted terriermen on National Trust land without consequence. The Duke of Beaufort’s Hunt (AKA the Beaufort Hunt) was licensed to access Horton, Cotswolds, on 17 January, 14 February and 17 March. Cirencester Illegal Hunt Watch (CIHW) monitored the 17 January meet. And it claimed terriermen were seen following the hunt throughout the afternoon.

CIHW claims it also spotted the Beaufort Hunt with terriermen on 4 December 2017, and again on 6 January. These sightings were not on National Trust land but it shows terriermen appear to be a regular feature of the Beaufort Hunt. On 17 March, Beaufort’s third licensed meet at Horton, CIHW once again saw terriermen “out in force”.

The monitoring group also claim that the hunt was involved in chasing a fox during its Boxing Day 2017 meet. The ‘hunt breaches’ document outlines two historic incidents for this hunt. These include a POWA monitor filming the Beaufort Hunt’s hounds chasing a fox in November 2012, and an instance of hunt havoc in 2009 when six hounds were hit by a train and killed.

“Evidence gathering is hard to do”

The National Trust’s recognition that terriermen have “no practical purpose” should be a cut and dry statement. But the presence of Beaufort Hunt terriermen, reportedly on 17 January, on the charity’s land apparently went without penalty. And the hunt returned at least once more, again with quad bikes in tow.

Minutes from the National Trust meeting with anti-hunt campaigners suggests why that might be. McGrady said the charity “must have its own, credible evidence” gathered by staff. But Harold admits that “evidence gathering is hard to do”. How then does the National Trust expect to be able to effectively audit the Warwickshire Hunt, Beaufort Hunt, or the dozens of others (67 in 2016/17) that traditionally use its land?

Prior to the AGM vote on trail hunting, the National Trust said it believed that:

And its “Our position on trail hunting” statement laid out the basis on which members would be able to make an informed decision. But the National Trust appears, as yet, unable to meet the expectations it set. Nor does it seem to have put in place a means of doing so. Instead, hunts are expected to report back on their own actions.

The Canary approached the National Trust for comment on the points made throughout this article. It said:

Our new licensing regime is making trail hunts more accountable and less likely to disturb wildlife on our land, thus further safeguarding conservation and access on our land. However, we continue to take any reports of unlicensed activity on our land very seriously, and have suspended a Hunt over one such investigation in recent months. In the next licensing period, monitoring will be further stepped up. We are satisfied our new conditions are rigorous.

The suspension the NT mentions was for Melbreak Foxhounds, whose licence was suspended following a supporter assaulting a hunt monitor.

It shows the charity is able to suspend licences even for a single incident. Yet the ‘hunt breaches’ document lays out similar incidents for many hunts licensed in the 2016/17 season. And there’s plenty of evidence for ongoing incidents by some, such as the Warwickshire Hunt and Beaufort Hunt.

During the summer of 2018, the National Trust will review its trail hunting licence conditions. Public pressure must be maintained to make sure a proper job is done. So that hunts are truly held accountable for their actions.