Bob Dylan's 'Blowin' in the Wind' has been re-imagined for the 'millions missing': Part Two - The Canary 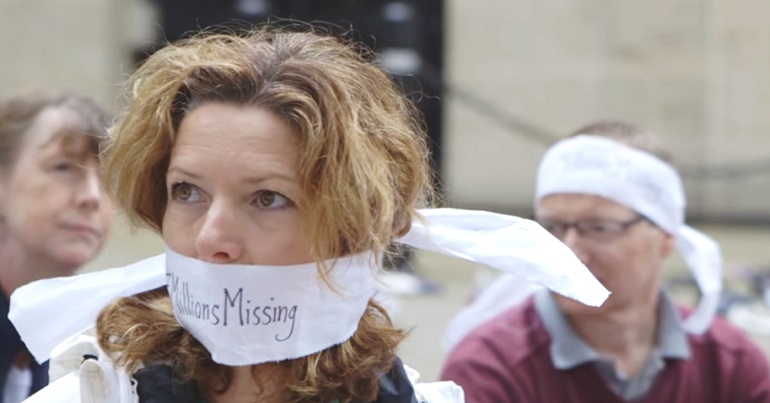 An author and campaigner who transformed a Bob Dylan classic into a song for millions of chronically ill people believes that only once a major medical scandal is fully exposed can the answers people are looking for be found.

This is part two of a two part article. You can read part one here.

Part one explored the motivation behind campaigner and writer Robert Saunders releasing a rearrangement and reimagining of the Dylan standard Blowin’ in the Wind. Called A song for ME. It has been released in support of the objectives of the #MillionsMissing campaign.

The campaign is about myalgic encephalomyelitis/chronic fatigue syndrome, commonly referred to as ME/CFS or ME, a chronic systemic neuroimmune disease. At least 17 million people worldwide are thought to be living with ME; in the UK, it is around 250,000. Saunders’ A song for ME discusses the challenges facing the community:

But the disease has been fraught with controversy, not least due to a widely condemned medical study.

As The Canary previously reported, the PACE trial, a study into treatments for people living with ME, has been fraught with controversy. It claims that people living with ME can improve their illnesses, and sometimes recover, by having cognitive behavioural therapy (CBT) and by using graded exercise therapy (GET).

Carol Monaghan MP is calling for a parliamentary debate into ME and the PACE trial. Saunders agrees. He told The Canary:

I believe it will be necessary to conduct an independent parliamentary inquiry into the PACE trial and the treatment of people with ME, and for those who are responsible for the mistakes which have been made to be held to account for their actions.

Monaghan and Saunders have good reason to want an inquiry into what she labelled “one of the biggest medical scandals of the 21st century”.

The results of the £5m PACE trial, part-funded by the UK Department for Work and Pensions (DWP), were originally published in The Lancet in 2011. But many independent scientists, medical professionals and disabled people have dismissed them as damaging, ineffective and flawed due to multiple, methodical flaws in the trial’s design.

In the US in 2016, the federal Agency for Healthcare Research and Quality (AHRQ) downgraded the reliability of GET for ME patients, saying there was “insufficient evidence of effectiveness of GET on any outcome”. It also said there was “low strength” or “insufficient” evidence about the effectiveness of CBT. In 2017, the US Center for Disease Control (CDC) also removed CBT and GET as recommended treatments.

In the UK, CBT and GET are still the NHS’s approved treatment under guidelines from the National Institute for Health and Care Excellence (NICE). But NICE is undertaking a review of this. Most recently, a new study into the PACE trial’s findings cast even more doubt on it. Using the original methodology, it found that the results for people who tried CBT and GET were overstated.

Some of the flaws are so elementary that one would be disappointed if a fifteen-year-old school child was not able to understand them.

Sadly, this has more to do with politics than science or medicine. The obvious reason why PACE continues to exert such influence in the UK is because it was a UK trial, funded by the UK taxpayer, conducted and supported by the UK establishment.

The DWP: up to its neck

And he is not wrong. As The Canary documented in 2016, the PACE trial:

The DWP is particularly keen on psychological explanations, a.k.a the bio-psychosocial (BPS) model for chronic ill health. Professor Tom Shakespeare says… BPS ‘played a key role’ in the narrowing of eligibility criteria for disability benefits such as Employment and Support Allowance (ESA).

Additionally, one of the researchers on the PACE trial worked for Unum Provident Insurance (UPI). UPI pushes the BPS model to reduce disability-related insurance claims. As The Canary again noted:

UPI is one of the UK’s biggest providers of income protection insurance (IPI). As a consequence of more holes appearing in the social security safety net, more people are likely to take out IPI, increasing UPI’s profits.

Sir Mansel Aylward, chief medical officer for the DWP, sat on the PACE Trial steering committee which approved the mid trial changes to the methods. Aylward has also worked for UPI and is a keen proponent of the BPS model, being very influential in promoting it to the DWP.

There is also the questionable impartiality of organisations like the Science and Media Centre (SMC); a charity that promotes cooperative working between the media and the medical and scientific communities. As The Canary reported in March, it has been actively trying to discredit anyone who questions the findings of the PACE trial; allegedly due to vested interests.

It is this six degrees of separation between medical professionals and organisations with apparent vested interests in denouncing ME as ‘all in people’s heads’ which is crucial to understanding the anger and frustration of those living with the disease. But they will not be beaten.

The message of Dylan’s original of Blowin’ in the Wind is ambiguous. Saunders notes this, saying the “opacity” of it was a “source of frustration” for him, but now he’s come to “embrace the ambiguities”. In particular, the line “the answer is blowin’ in the wind” could be viewed in two ways: either it means that the answer (to whatever challenges people face) is so obvious it’s all around us, or it is always forever out of reach. Saunder’s is hopeful it’s the former. He told The Canary:

I feel certain that objective diagnostic tests will be developed which may well lead to people with ME being classified as having different diseases or different types of the same disease. And I feel similarly confident that effective treatments will be developed, but how long that will take I don’t know. It depends how much money governments are willing to invest in biomedical ME research. If the sums invested were proportional to the disease burden – hundreds of millions of dollars/pounds – I believe we could have most of the answers we are seeking within the next five to 10 years. But… unless the lessons of the past are learnt, history will repeat itself once again.

For many ME patients it is already too late, but I have a strong sense that we are approaching a tipping point… After decades of neglect, real progress is starting to be made in biomedical ME research. There is now good evidence of metabolic, immunological and neurological abnormalities, and there is a growing interest in and enthusiasm for understanding more about the pathological basis of the illness or group of illnesses which come under the umbrella of ME/CFS.

A long and winding road

The journey that started as an illness for Saunders, and has now led him to releasing A song for ME, has taken its toll. He used to be a keen sportsperson, was academically gifted at school, and always thought he’d be travelling the world, having a family and enjoying a successful career. But he told The Canary he now wants:

To understand the illness that has destroyed my life, and for my health to improve to a level where I can live independently.

This may seem like a devastating admission, and resignation. It’s not – Saunders still has great ambitions. And as this journalist knows from personal experience (my partner lives with Ehlers-Danlos syndrome) it’s the mark of a fighter to want to confront your illness head-on.

The answer: blowin’ in the wind?

But even though Saunders admits that he “increasingly feels” that time my be “running out for him”, campaigning also makes him continue:

If I can act to help to prevent others from having endure the misfortune and indignities to which I have been subjected, my adult life will not have been entirely worthless.

For all my anger and frustration, I also hope that I may one day be in a position to accept the apologies from those who are responsible for, what Monaghan referred to as, ‘one of the biggest medical scandals of the 21st century’. To live with the knowledge of having inflicted such hardship and misery upon so many for so long would be an extraordinarily heavy burden for anybody to have to bear, and I would try hard to forgive them.

Could the answer to ME be ‘blowin’ in the wind’? Only sustained pressure from patients, campaigners, medical professionals, journalists and the public will allow us to find out. But it won’t come soon enough for the millions of people living with ME. People have been disbelieved, neglected, stigmatised and given incorrect treatment for far, far too long.

– Find out more about Saunders’ work.