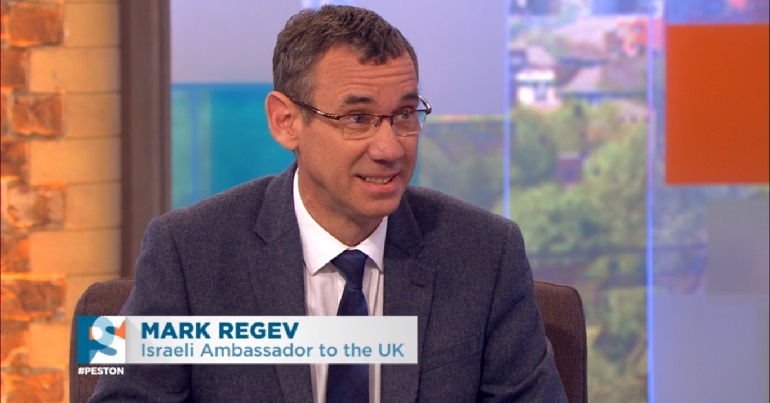 Israel may have wooed the world with their Eurovision victory, but state representatives are still courting controversy. On 13 May, Israel’s ambassador to the UK Mark Regev appeared on Peston on Sunday. In the interview, Robert Peston challenged the ambassador about Israel’s actions in Gaza. Regev’s response was extraordinary.

Robert Peston opened the interview  by asking the ambassador about the feasibility of peace between Israel and Palestine through a two state solution:

We’re also at the 70th anniversary of the founding of the state of Israel, now for Palestinians, as you know, it’s still described as the day of catastrophe. Some, even on the left, say to me that they now think the two state solution is a thing of the past – it can’t happen. That would be a tragedy wouldn’t it?

Regev’s response was to lay full blame for the ongoing conflict at the door of Palestine:

We haven’t been talking because the Palestinians refuse to engage.

We’re willing to do more, and we want to help.. But the fundamental we all face … is what do you do when you have a government in Gaza that really doesn’t care about the people there? They’re more dedicated to their holy war against Israel than improving the conditions on the ground for the people of Gaza.

Labour MP Lisa Nandy was also on the programme. She responded with heavy criticism of the ambassador’s claims:

It’s really disingenuous, I think, to talk about Israel’s role in all of this without acknowledging what the Israeli government is doing to the Palestinian people, denying them access to water, threatening to demolish schools, even in the last couple of weeks, building settlements in the occupied territories.

Israel has occupied Gaza since 1967. The Israeli government has faced extensive criticism for its role in the Palestinian territory since then, including for its military action and its role in the ongoing water crisis.

In 2014, an Israeli military offensive in Gaza led to the deaths of more than 2,200 people and destroyed over 20,000 homes. This followed a similar attack in 2009 which killed more than 1,400 Palestinians.

Early this year, it was reported that 97% of drinking water is contaminated. Oxfam has alleged that Israel’s blockade of Gaza:

severely limits materials from entering, making it incredibly difficult to develop water and sanitation infrastructure to meet the needs of a growing population.

When measured against the reality on the ground, Regev’s claim that Israel “want to help” is a little hard to take seriously.