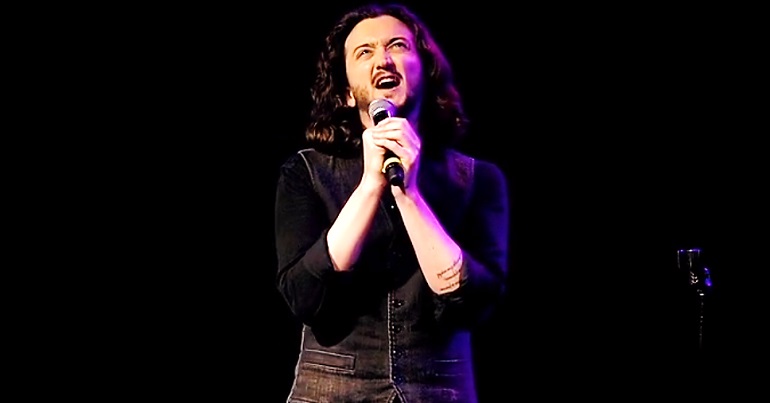 A US comedian has released perhaps his most searing stand-up show to date. But it’s not surprising, as this comedic genius is renowned for his acerbic wit and ability to mix hard politics with big laughs; presenting some of the most pressing issues we face through the lens of comedy.

Lee Camp: not so redacted

Lee Camp is a comedian and host of satirical show Redacted Tonight on RT America. He is also a fierce activist and writer, incorporating issues he’s passionate about into his show. But now, Camp has released the stand-up show to end all stand-up shows.

It’s not for the faint-hearted. But it showcases brilliantly the artist’s ability to mash up razor-sharp political insights with belly-laughs. So The Canary caught up with Camp to discuss the state of comedy today, whether people are waking up politically, and just how fucked he thinks our species and the planet actually are.

Super Patriotic Very Uncle Sam Comedy Special Not Allowed On American TV is Camp’s new stand-up special. Filmed at the El Rey Theatre in Los Angeles, and with an introduction by journalist Abby Martin, the setting feels intimate and niche. That is, until Camp gets started. Because his presence is larger than life and would be just as comfortable in a huge arena as it is in a theatre.

It would be ridiculous to list every topic Camp covers in the show. But he rattles through Trump; climate breakdown; elections; the ‘1%’; the mainstream media; the Middle East; and the prison system, to name but a few.

Camp told The Canary that there was “so much bullshit to wade through” that he didn’t really want to leave any topics out:

You know, I’ll think ‘Well, I can’t have a comedy special without talking about the prison system’. Then I’ll think ‘I can’t forget to talk about our craptastic election system’. And anyway, it just goes from there. By the end, I’ve included everything except the rubber chicken. Speaking of that – factory farming of rubber chickens is really horrible. We need to go back to free-range, happy rubber chickens…

Camp’s style of comedy is unique. His ability to flip between machine-gun-like delivery and slower, more conversational dialogue is impressive; perhaps reflecting the emotions he’s feeling about the subject matter at that time. But Camp is vocally so dexterous that he doesn’t drop a syllable, and the viewer receives every word. And that’s good, because there’s so much contained in Camp’s script that you could easily miss something.

Take his acerbic, yet hilarious, commentary on the Middle East and perpetual US-led wars. Camp says in the show:

All these fucking people we’re supposedly fighting over there, y’know… no matter which country. We fucking created them, and funded them, and propped them up. Whether it’s al-Qaeda back in the 80s; we helped create ISIS – ISIS is using our weapons – now… We helped Saddam Hussein until we didn’t anymore, and Gaddafi until we didn’t anymore. It’s like we’re playing Whack-a-Mole over there except no one mentions it’s our own arm.

This is a prime example of what makes Camp stand out. He has a precocious ability to take prickly topics that most of the media wouldn’t dare mention; fire the facts at you in a serious way, then sucker-punch you with a hilarious, off-the-wall climax to hammer his point home. Camp is a rarity in the comedy landscape; not least for his delivery but for the content as well. And he knows it, telling The Canary:

There are other comedians out there doing great political and cultural commentary, but you’re right that they are few and far between. There are many reasons for that. One is that comedians are not generally rewarded for truly radical political material. You run the risk of alienating an audience that just wants to laugh. Plus, corporate America is not going to reward that either. Lenny Bruce was basically chased to his death for criticizing the ruling power structures.

So why would a comedian want to do that to their career? I’m sure there are amazing comedians out there who just haven’t been rewarded by the corporate gate-keepers. And that’s why this comedy special has ‘Not Allowed On TV’ in the title.

Indeed, only RT America sees fit to give Camp a regular slot. This is a crying shame; not least because Camp represents what comedy and the arts should be about: delivering and inspiring political and social debate and, ultimately, change. For example, Camp is giving 10% of the sales from the show to campaign group Veterans for Peace (VfP). He said of the group:

Recently, Trump sent our military to act as border patrol (which is supposed to be unconstitutional). But VfP called on the soldiers to obey their conscience rather than their orders. We need more organizations like VfP reminding people that we live in an inverted moral universe where protecting refugees is illegal and imprisoning them is government-sanctioned.

It’s this intersection between the arts and activism which we currently see more and more of in music, photography and other mediums. But it’s a rarity in comedy. Despite this, Camp thinks that the arts are indeed “crucial for change”. He told The Canary:

As they say, ‘If you want to tell people the truth, you’d better make them laugh or they’ll kill you’. Art is crucial to inspiring people’s passion and getting around the cultural engineering that has taught them not to question the status quo. If you come at people straightforward, the powers that be have a million ways to knock you out at the knees. But if you wake people up with comedy, and music, and art, and performance – it’s a lot harder to suppress and tear down.

And if we needed the arts to be inspiring and transformational before, we may need them to be so now more than ever.

The planet in chaos

With climate and ecological catastrophe looming, the far right on the rise, chaos in the Middle East, and corporations becoming all powerful – the outlook for our species and our planet isn’t good. But Camp doesn’t believe this is necessarily the worst society has been; citing advances in freedoms and health. But he told The Canary:

In terms of our ability to sustain on this planet – we are at the worst point in human history. According to the Intergovernmental Panel on Climate Change [IPCC], we have less than 12 years until we will have passed the point of no return for climate change. That’s the blink of an eye. If I did my math right, that means if you laid the Earth’s history across the length of a year with the first day of Earth being the first second of January 1st, then we would only have the last millisecond on December 31st to turn things around before we hit the point of no return for our extinction. We have one millisecond. So in that sense, we are very very screwed… to put it lightly… But we must fight on.

This theme of ‘fighting on’ and people ‘waking up’ to the chaos is a constant throughout Camp’s show. It’s this which actually makes his work so powerful. It would be (fairly) easy for him to just fire salvos at the establishment and society’s problems. But while he does do this, he also offers solution, after solution, after solution; ones that the people who control our planet probably won’t like at all. In the show, for example, Camp does a tirade about jobs:

Couldn’t you have jobs doing good things? Couldn’t there be a job planting trees?

And why not? This is the point. Amid the intentional chaos and constant corporate narratives, often the solutions are the most simple. This is probably why Camp believes that, while things are looking grim, there is still hope. He told The Canary:

I think we can turn it around, but I’m not necessarily optimistic. We have to first overcome a great deal of social engineering designed to make us buy into endless consumption, profit over people, wage slavery, false scarcity, debt peonage, etc. Once we realize we don’t need to live this way, we have a shot at repairing the harm… I consider myself a cynical optimist: I view the glass as half full of shit.

Camp’s show is a masterclass in politically-driven comedy. Razor-sharp, witty, acerbic, and somewhat off-the-wall at times, he delivers his on-point political and social messages with the biggest dollop of humour going. If you can stop yourself laughing, Camp’s show will probably teach you a thing or two. That’s how perfect comedy, which this is, should be.