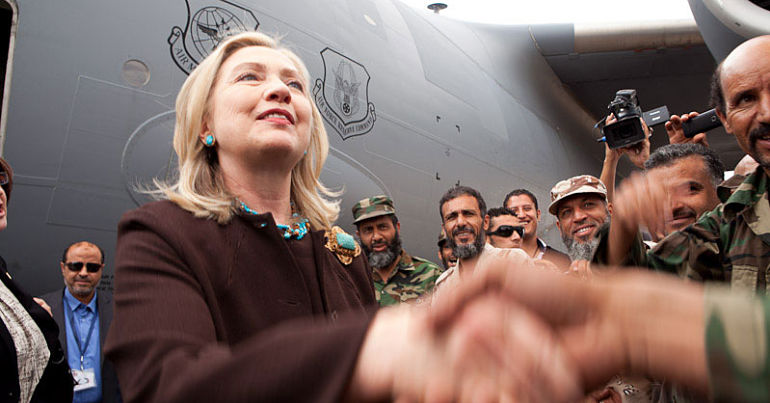 Ever since Hillary Clinton’s dismal failure to beat Donald Trump in the 2016 US presidential election, her appearances in global politics have caused widespread anger and despair. This reached a climax recently when rumours circulated that she might run again in 2020.

But now, in an interview with the Guardian, she has surpassed herself – with comments as shameful as they are lacking in common sense. They have to be the final nail in centrism’s coffin.

She claimed, for example, that “Europe needs to get a handle on migration because that is what lit the flame” of right-wing populism – essentially suggesting that politicians need to be even more right-wing in order to fight off the far right.

During a series of interviews with centrist political figures throughout Europe, Clinton said:

Europe… must send a very clear message – ‘we are not going to be able to continue [to] provide refuge and support’ – because if we don’t deal with the migration issue it will continue to roil the body politic.

It’s not unfair to say that Clinton has done more to create the ‘migration issue’ than most politicians. Because as US secretary of state, for instance, Clinton was instrumental in the 2011 bombing and subsequent massive destabilisation of Libya.

After NATO forces deposed Gaddafi in 2011 (whose son Clinton welcomed to the US two years prior), Libya became a “failed state”. Many of the refugee boats crossing the Mediterranean Sea for Europe are now full of Libyan refugees; they are fleeing a humanitarian disaster of Washington’s making.

Now that the consequences of Western foreign policy are visible in the Western world, it’s shameful that these policies’ architects (like Clinton) are pointing the finger at refugees and not themselves.

Breaking news: the woman who gave us Libya is complaining about the number of refugees and migrants entering Europe. https://t.co/cOjltaJMI8

Hillary Clinton's longstanding, steadfast support for destabilizing military interventions in the Middle East is directly connected to the migrant crisis, and any journalist who questions her on the issue without bringing up this central aspect is absolutely derelict

Whatever you think of Clinton’s stance on immigration, the logic of her argument simply doesn’t add up.

By asserting that “Europe must curb immigration to stop rightwing populists”, Clinton is essentially saying: ‘to stop the right, we must become the right’.

This argument was quickly shredded. Owen Jones, for example, wrote:

Defeat the far right by surrendering to their ideas, say the discredited centrist superstars https://t.co/SRzfbX7TVA

While Clinton’s argument makes no sense, it is characteristic of ‘centrist’ thinking. Centrism is less grounded in principle than trying to reflect public mood. And today’s right-wing populism is the birthchild of this ideological laziness, centrist-backed austerity policies, and distrust sowed by centrist politicians’ hypocrisy.

The path to fascism…

Centrism is dying. But it won’t go down without a fight. And the more the Clintons, Blairs, and Bushes of the world persevere, the greater chance the “rightwing populists” whom they allegedly revile stand of winning.

The path to fascism, it seems, is paved with centrists’ good intentions.

Featured image via US Department of State