The media's focus on the Trump-Macron spat misses the point: lazy centrism paved the way for Trumpism - Canary 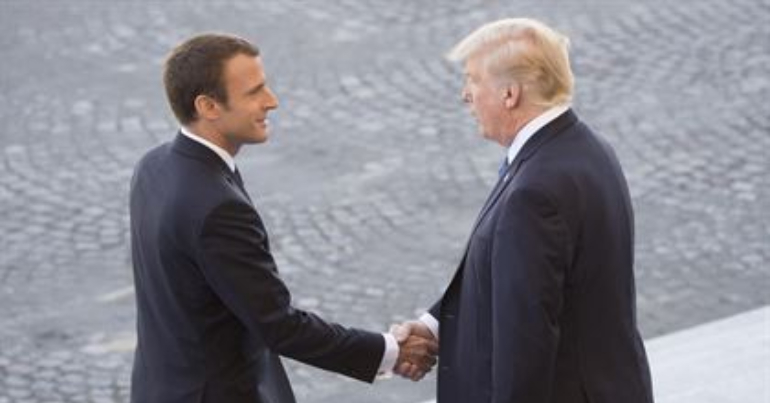 The mainstream media has been having a field day over US president Donald Trump’s controversial Paris visit and his spat with French president Emmanuel Macron. And the leaders’ criticisms of each other aren’t off target. But we shouldn’t forget that it was Macron’s style of neoliberal/austerity-lite politics that helped to usher in the era of right-wing populism across the globe.

On 11 November, Trump visited Paris for an international summit. Speaking at the event, Macron warned about the dangers of nationalism. Commentators noted that his words were unmistakably directed at Trump, who recently declared himself a nationalist.

Macron had earlier spoken in favor of an EU army, talking about the need “to protect ourselves with respect to China, Russia and even the United States of America”.

Trump, meanwhile, attracted criticism for reportedly being the only attending leader to skip a conference about working toward a more peaceful world that took place directly after the summit. The previous day, he had also failed to attend a planned visit to a US military cemetery. He reportedly didn’t show up because it was raining, prompting strong criticism from across the political spectrum.

Once back in the US, Trump swung back at Macron. He first attacked Macron’s suggestion of an EU army, mocking France’s performance in the first and second world wars. And he then turned to Macron’s record, tweeting:

Emmanuel suffers from a very low Approval Rating in France, 26%, and an unemployment rate of almost 10%… By the way, there is no country more Nationalist than France…

And with that tweet, Trump actually touched on something that the mainstream media consistently fails to pick up on.

France’s unemployment rate is indeed high – even by Macron’s own admission. And he does suffer from poor approval ratings. But this is all largely because he openly, and seemingly rather proudly, represents the kind of stale ‘centrism’ that set the conditions for the rise of hard-right populist movements around the world. That includes Trumpism in the US and the National Front in France.

Consistent failure on the part of neoliberal governments (led by both ‘centre-right’ and ‘centre-left’ parties) to expand social security or fight against corporate and financial industry excesses created widespread resentment. People understandably began to feel that mainstream parties of all stripes were made up of out of touch elites who only represented entrenched interests.

Although France has a stronger social safety net and more state intervention in the economy than the US and the UK, not one French government since that of Francoise Mitterand in the 1980s has mounted a serious challenge to neoliberal policies and economic globalization.

So while Macron might talk the talk by denouncing Trump’s nationalism and right-wing populism, he isn’t the antidote. He and his neoliberal, faux-left ilk are rather its progenitors.