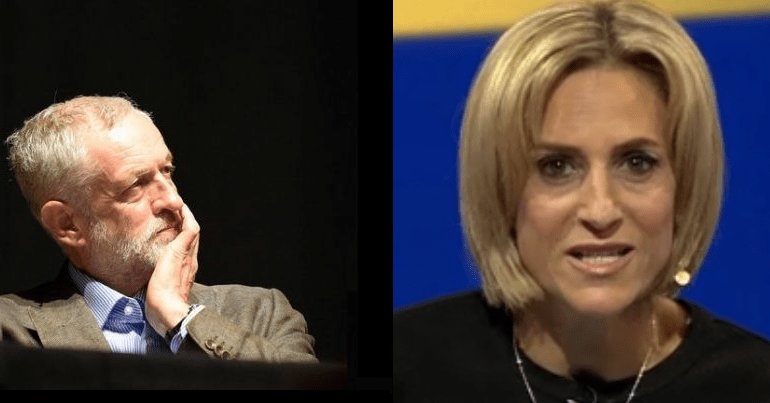 Labour has officially complained to BBC Newsnight after host Emily Maitlis repeatedly stated that Jeremy Corbyn supports leaving the EU. Despite the Labour leader campaigning on a remain platform, Maitlis portrayed Corbyn as an ardent leaver through the programme. 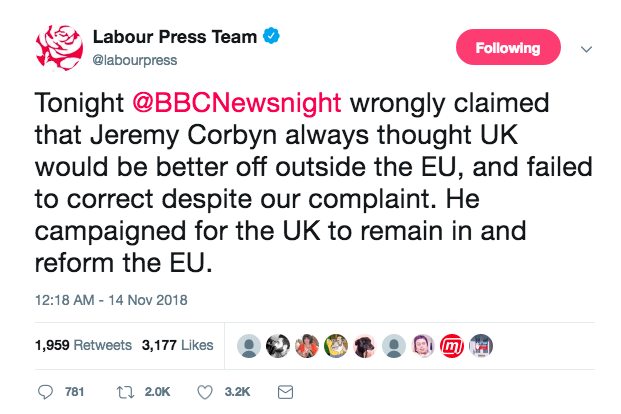 On Newsnight, Maitlis suggested that Corbyn is “ideologically wedded” to Brexit. And she went on to tell shadow secretary for international trade Barry Gardiner:

You share the belief with Jeremy Corbyn that we’d fundamentally be better off outside the EU.

The presenter then suggested that Corbyn would vote for Brexit. Such claims have dubious origins. The corporate media theory that Corbyn voted leave in the referendum seems to originate from somebody called Martin Waplington. Waplington claimed Corbyn told him in a Tapas bar that he planned to vote leave and the media ran to the moon with it. It didn’t seem to matter too much that Corbyn was actually filming The Last Leg with Channel 4 on that Friday night.

Evidence: the media ignored Labour during the EU referendum

But the data shows that the BBC is actually partly to blame for the Labour leader’s lack of voice during the referendum. The New Statesman conducted analysis into media coverage of the EU referendum.

The outlet analysed the main evening bulletins on Channel 5 (5pm), Channel 4 (7 pm), the BBC, ITV, and Sky News (10pm). And the findings showed that, while the broadcasters balanced Remain and Brexit voices, 71.2% of political sources were from the Conservative Party, compared to just 18.4% from Labour.

And the New Statesman noted:

During the campaign, Corbyn attended 10 EU rallies across the country along with speeches and meetings. He also debated on Sky News, wrote two op-eds and launched a campaign bus. And the grassroots Corbyn-supporting organisation Momentum mobilised the 100,000 registered supporters it had at the time to campaign for Remain.

Allowing lies to spread about the EU

The New Statesman’s research also showed that the broadcast media didn’t just marginalise progressive arguments. Out of 517 statistical claims made over the ten-week campaign, journalists only challenged “just over one in five”. Partisan pitches from politicians and journalists also marginalised “independent sources with expert knowledge”.

So the media’s failure to facilitate a broad, fact-based debate did a lot to damage the EU referendum campaign. And the BBC played a big role in that, treating the referendum as a war between two factions of the Conservative Party. Yet here the public broadcaster is trying to blame Corbyn for Brexit. It’s propaganda, pure and simple.