It’s come to light that the government’s fracking ‘tsar’ has written to the media. In the letter, she effectively asks editors to stop “feeding the narrative of fear” and “scare stories” about earthquakes. Frack Free Lancashire has called the letter “a dangerous attempt at manipulation of the fracking debate”.

Natascha Engel is a former Labour MP, now turned Shale Gas Commissioner for the government. It gave her the job on 5 October to work independently but in tandem with the Department for Business, Energy and Industrial Strategy (BEIS). As the government said:

Engel will be a direct communication link between local communities, the shale gas industry and the industry regulators. The commissioner will be a contact point for residents, to listen to their concerns, refer them to relevant and factual research and help improve communication with regulators and industry.

But far from getting off to a smooth start, Engel caused uproar when a letter she sent to the media was leaked.

It effectively calls on the media to stop its negative reporting about fracking; specifically focusing on earthquakes. Engel says of the media:

By reporting fracking events that cause tremors of 1.1… as earthquakes… the media is feeding the narrative of fear that originates from those who have been spreading scare stories because they want to stop fracking at all cost.

Where is the science in this debate?

She goes on to say the “real story” the media should be reporting is the amount of gas that’s available. And she brands opposition to fracking as “anti-progress”: 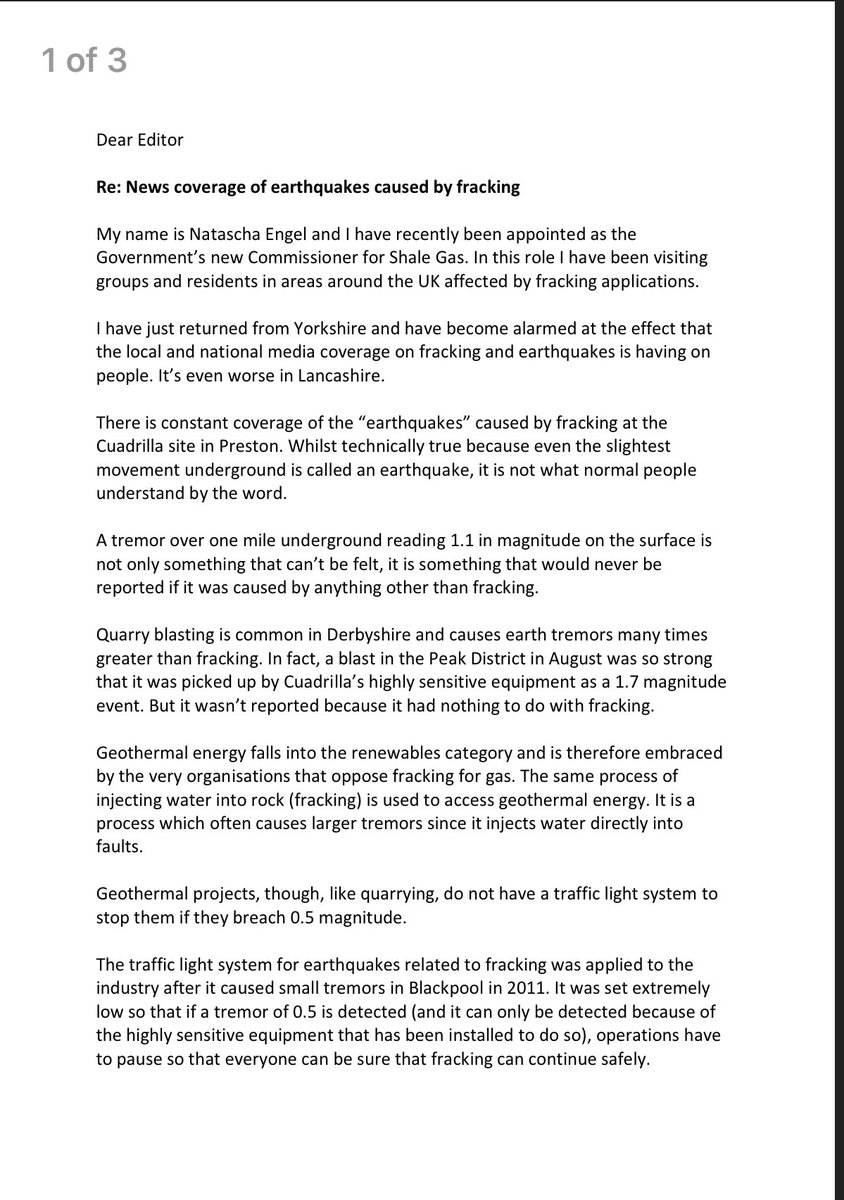 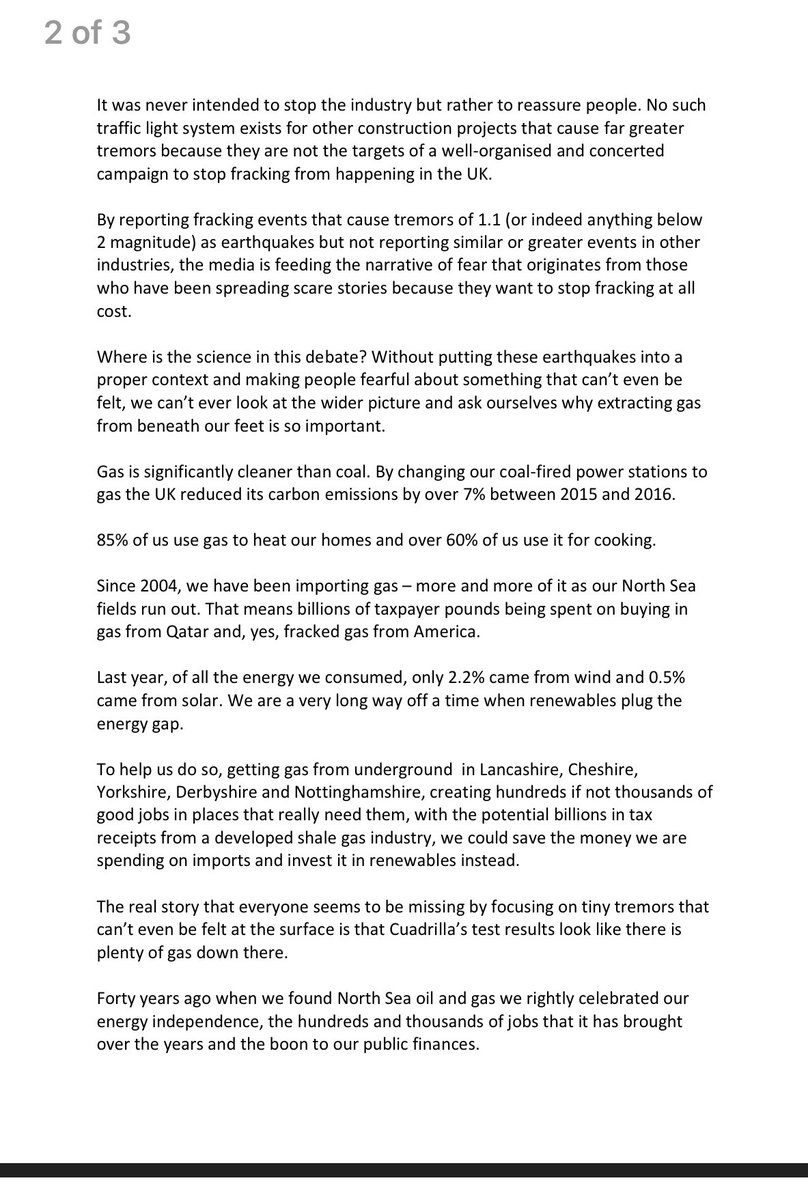 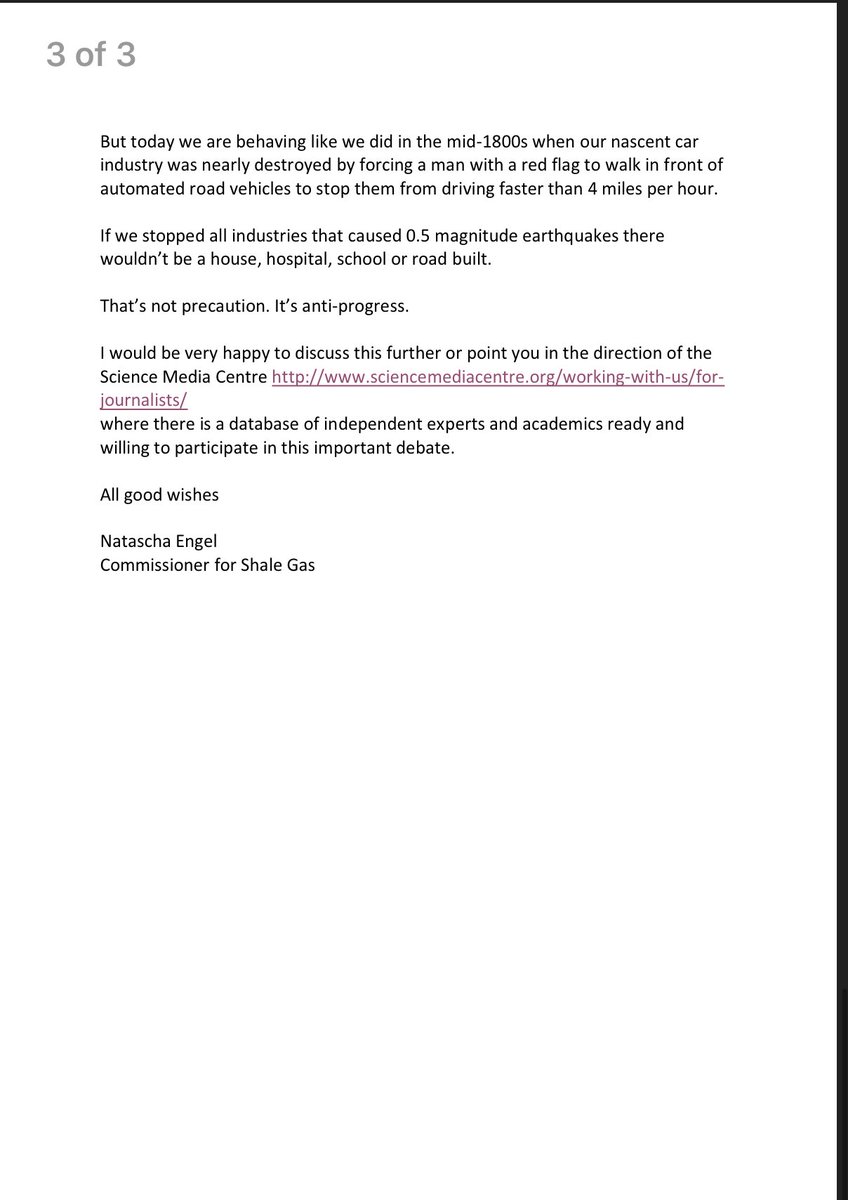 Engel claims in the letter she is “alarmed” by the effect the media coverage of fracking is having on people. But already, she seems to be whitewashing residents’ and campaigners’ concerns. Not least in the face of dozens of earthquakes in the space of a month.

As The Canary has been following, the British Geological Survey (BGS) has recorded 36 tremors near to fracking firm Cuadrilla’s Preston New Road since Thursday 18 October. The strongest of these happened on 29 October, with a magnitude of 1.1. The BGS said it was felt in Blackpool. Cuadrilla has stopped work several times, due to the magnitude of the tremors breaching the government’s traffic light system:

But there’s a problem with Engel’s cavalier attitude towards earthquakes and her attempts to lobby the media over them. It’s because some research is not painting the same picture she does.

For example, researchers from Stanford University in the US have already warned of the risks; noting that small earthquakes “may be early indicators of bigger tremors to come”. They say that the process of fracking could destabilise faults that already exist underground, causing larger tremors. Their research also showed that earthquakes continued at fracking sites after the operations had stopped.

Also, as The Canary previously reported, a former UK government adviser went even further. An emeritus professor in applied and environmental geophysics, Peter Styles called out the entire fracking industry. He questioned its ability to accurately map potential earthquake-causing fault lines on every site in the UK. Styles said:

Unfortunately the physics of it means you cannot see those faults with the (survey) waves that you put into the earth. To date it does not appear that any proper industry or government due diligence has taken place with regards to the fault lines mapped.

The Canary asked the BEIS for comment. But it had not responded by the time of publication.

The purpose of my letter to editors is to get science and rational argument into the public debate on fracking.

Frack Free Lancashire is incensed. A spokesperson told The Canary:

Ms Engel’s lobbying letter to the press, in an attempt to dumb down media reports of the earth tremors that have been caused by Cuadrilla fracking at Preston New Road, has revealed yet more desperation by a government and fracking industry in its death throes. The letter has also exposed a dangerous attempt at manipulation of the fracking debate, to one of controlled industry PR spin and obfuscation. Her role with the government is nothing more than a lobbyist for the fracking industry.

The fact that Ms Engel has been operating from her own personal email address for over a month should also alarm people who rely on Freedom of Information requests to maintain transparency and get answers from the government on its fracking agenda.

It’s unclear where to start with Engel’s letter. From the fact she was a Labour MP, to her allegedly “independent” role turning into one of lobbying, via the fact that a government tsar feels they can write to the press in this way in the first place, her position is both staggering and worrying. Because with the public increasingly opposed to fracking, the industry and its supporters are quickly running out of ideas.