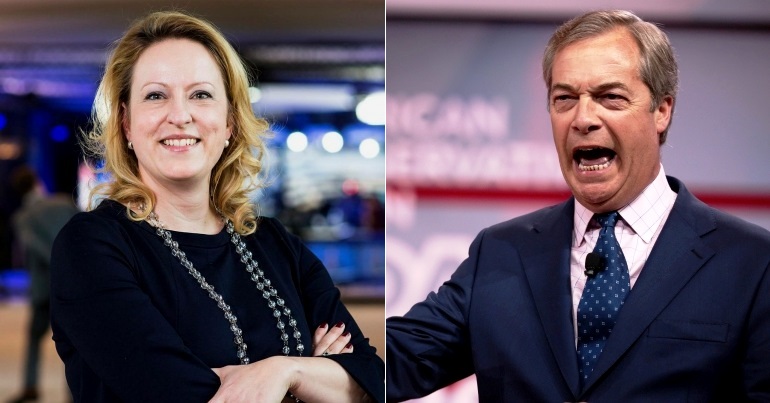 A video of a member of the European Parliament calling out Nigel Farage’s hypocrisy is going viral. And it really is a must-watch.

The “circus” that is Nigel Farage

This is the man who actually led his country, led his party, to a Brexit vote, only the next day to admit that he lied and tricked, and to jump ship and leave his party. This is not leadership; it’s a circus.

She then went on to criticise Farage’s hypocrisy:

He says he doesn’t want to be part of a German European Union. Yet he has made sure that two of his children have German passports. This man wouldn’t know hypocrisy if it stared him straight in the face.

And Nige got owned today in the European Parliament about not wanting to be part of a German run EU while getting two of his own children German passports. pic.twitter.com/VsW1pgQIDd

Many people on social media picked up on De Lange’s second point, commenting on the irony of Farage championing Brexit while collecting a large paycheck from the EU:

I think that Nigel Farage is a hypocrite. He hates the EU and wants to see Britain out of it but he is quite content to be a member of the European Parliament and pick up his salary though.

He usually just takes Europe’s cash and doesn’t turn up for his job at the European Parliament. @Esther_de_Lange Thank you for your ever so accurate speech.
Farage is a total hypocrite.
So glad you did that to him on such a huge stage.

De Lange’s takedown of Farage has been appreciated for many reasons, not least of which is its sheer entertainment value. But people also took to Twitter to highlight Farage’s poor track record as an MEP:

Where was your mate @Nigel_Farage in European Parliament when he was fisheries minister? Where were YOU when your mate failed to turn up and represent British fishermen?

Fuck off with the faux outrage. Point the finger at UKIP and the charlatan who betrayed Britain for years.

Nigel Farage has the lowest voting attendance record of any active MEP in the European Parliament.

Over the three years that he was a member of the Fisheries Committee, he attended ONE out of 42 meetings.

That isn't stopping him claiming his £73,000 per year EU pension though.

Nigel Farage has served almost 20 years in the European Parliament – yet he has never implemented any significant policy, anywhere, ever. https://t.co/iHekjUgl78

And while De Lange’s speech gets top marks for boldness, it seems as though getting insulted in the European Parliament is a surprisingly regular occurrence for Farage:

Instead of throwing dead fish in the Thames, Nigel Farage should have done his job as a member of the fisheries committee in the European Parliament, as I told him already years ago! https://t.co/yKU8AX8dig pic.twitter.com/8XbkSjBpOe

Fellow MEP in the European Parliament as Nigel Farage speaks. "He's lying to you" the sign says. pic.twitter.com/W8YLibFWZj

But come what may, Farage can take comfort in knowing that he will always have his slot on BBC Question Time:

Looks like Farage appeared more often on BBC Question Time @bbcquestiontime than he appeared in the European Parliament!

Nice gig if you can get it 🙂 https://t.co/WkvM0xwWaD

Farage’s hypocrisy, dodgy ‘leadership’, and poor political track record don’t really come as a surprise. But seeing his duplicity called out in the midst of the European Parliament by a fellow MEP was really rather delicious.