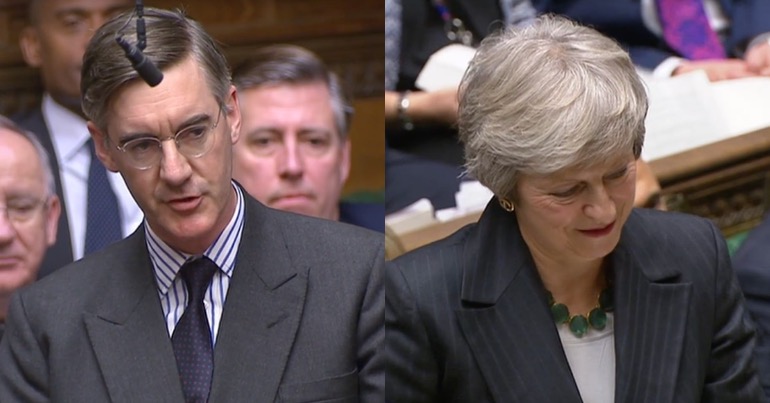 During a savage encounter in parliament, hard-Brexit advocate Jacob Rees Mogg threatened to no-confidence Theresa May to her face.

He joined in a parliamentary onslaught with other Tory MPs who, one by one, tore lumps out of their prime minister’s Brexit withdrawal agreement.

You can watch Rees-Mogg’s threat to Theresa May below:

Typically eloquent, like a character for a Dickens novel, Rees-Mogg’s threat was almost poetic, but remained direct and sharp.

Although he asserted his belief that the prime minister is “unquestionably honourable”, he proceeded to list a number of broken Brexit pledges that suggest she’s not.

The member for Altrincham

Mogg’s reference to “the member for Altrincham” is Graham Brady MP, chair of the infamous Tory 1922 Committee, a parliamentary group for Tory MPs.

As the Guardian has previously explained, the 1922 Committee can trigger a Tory leadership election if:

15% of Conservative MPs… write to the chairman of the 1922 Committee of backbench Tories. With the party’s 317 MPs, 48 would be needed.

It has long been speculated that the 48 letter no-confidence threshold is near to being met, but some Tories are sceptical of how close to the magic number they are.

Either way, after the near-universal backlash to May’s draft Brexit withdrawal agreement, it’s now very possible that the 48 letters will be reached, and a Tory leadership battle will be triggered. Chaos reigns.