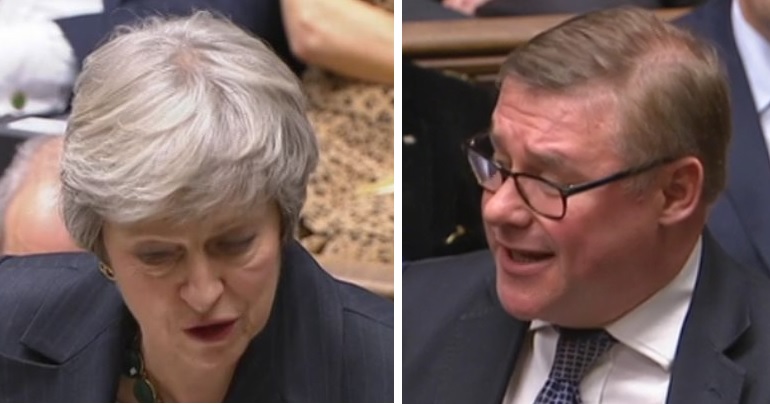 Theresa May faced off with parliament on 15 November over her deeply unpopular Brexit deal. During the session, one of her own MPs – Mark Francois – gave the prime minister a cold, hard dose of reality. He told her exactly why the deal will fail. And in doing so, he threw into question whether May can survive the ordeal at all.

The MP for Rayleigh and Wickford laid it out straight for May in the debate:

It is therefore mathematically impossible to get this deal through the House of Commons… I plead with you, I plead with you to accept the political reality of the situation you now face.

As Francois says, the “political reality” is now that the party May is dependent on in parliament, the DUP, is rejecting her deal.

Following disastrous results for the Conservative Party in the 2017 general election, May entered into a deal with the DUP. That arrangement is meant to see the party support May’s minority government in key votes, in exchange for a tidy £1.5bn.

The Brexit deal is, of course, a key issue. But the DUP’s Westminster leader, Nigel Dodds, made clear that his party has no intention of supporting her in the vote on the deal:

I could today stand here and take the prime minster through the list of promises and pledges that she made to this house, and to us privately, about the future of Northern Ireland in the future relationship with the EU. But I fear it would be a waste of time, since she clearly doesn’t listen.

Oooft. Does the DUP do cashback?

The entire legitimacy of May’s government lies in its deal with the DUP. If she loses its support, can she go on? With the DUP, and seemingly the vast majority of parliament, turning their noses up at her ‘best efforts’ on Brexit, that looks more and more unlikely with each passing minute.