Here come the hardline Brexiteers, ready to topple May - Canary 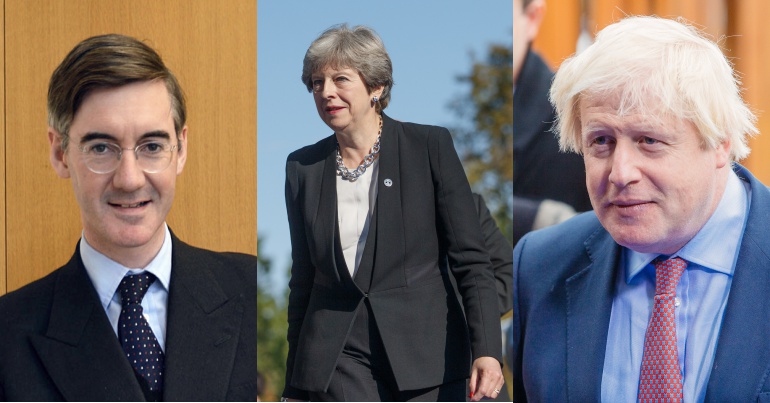 In a fast-moving day of politics, some hardline Brexiteers appear ready to topple Theresa May. Jacob Rees-Mogg has submitted a formal vote of no confidence in May’s leadership. And many more could follow.

Rumours have been circulating for some time, but just after 1pm on 15 November, confirmation came through that Jacob Rees-Mogg had submitted his letter:

Confirmed that Rees-Mogg has put his letter in , formal expression of no confidence in Theresa May

According to Conservative Party rules, if 48 members (15%) submit a vote of no confidence to the 1922 Committee, it will trigger a challenge to the party leader. Now, the pro-Brexit ERG (European Research Group) – led by Rees-Mogg – is reportedly pushing for Tory backbenchers to topple May:

It’s on. ERG calling for letters of no confidence to be sent to Brady. Rees-Mogg leading the call after his dramatic question in the Commons earlier.

But as Rees-Mogg announced he’d submitted his letter, he also ruled himself out of any potential leadership challenge:

Jacob Rees Mogg in dramatic press conference at entrance to Parliament: “im not offering myself as leader” it’s about confidence in the current leader. It’s “now too late” came to final decision after PM’s statement. pic.twitter.com/ca8ATZLmub

But he made some very clear and definite suggestions about who might step forward:

And at the time of writing, it is unclear whether Michael Gove will take a position as new Brexit secretary following Dominic Raab’s resignation:

Michael Gove will ONLY become Theresa May's Brexit Secretary if he can renegotiate her deal and the November 25 EU summit is scrapped.

And he is STILL weighing up whether to quit Cabinet…https://t.co/2ccBDfR22D

No statement from Boris Johnson today

However, former chancellor George Osborne’s paper noted that May is under serious pressure:

Our second edition ⁦@EveningStandard⁩ as May leadership challenge looms pic.twitter.com/CaGu4YFh3E

As Labour’s Angela Rayner pointed out, with the UK being plunged into Brexit crisis, the true state of the Tory party is right on show:

Now JRG and his European Research Group submit a letter of no-confidence in PM leadership. The Tory Brexit shambles continues, the strong and stable, in the national interest mantra has become a laughing stock. Tories attack each other while a Brexit crisis looms! #BrexitChaos https://t.co/N03eWJMfbz

As the Tory party falls apart before our eyes, many are wondering how long May can survive.