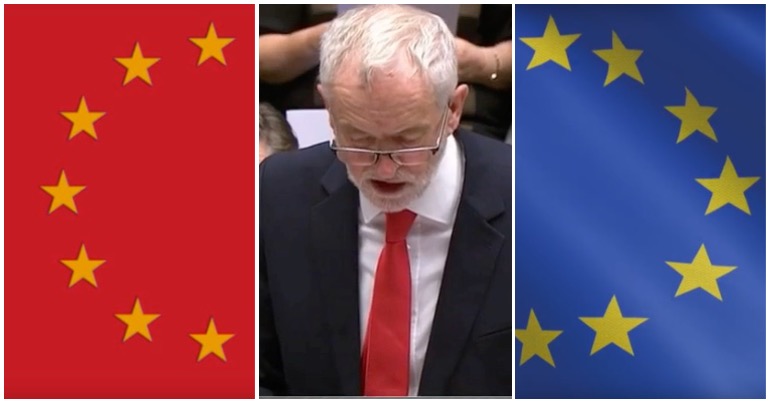 The devil’s always in the detail, and the contents of Theresa May’s draft Brexit withdrawal agreement should disturb anyone with socialist ambitions for the UK economy.

But the deal’s already dead, right?

Admittedly, this analysis of May’s plan is likely futile as her deal seems dead on arrival. After all, shs miraculously managed to achieve the impossible and unite leavers and remainers in a common hatred of her deal.

But should she once again defy conventional political wisdom and survive, along with her deal, people should understand the dangers of its content. Because many of its provisions seem to outlaw state intervention in the British economy – a huge component of Corbyn’s transformative socialist vision.

As Tom Kibasi of the Institute for Public Policy Research (IPPR) said of the agreement:

#WithdrawalAgreement is very strong on preventing state aid but much weaker on workers' rights and environmental protections. The non-regression clauses are stronger than a typical Free Trade Agreement but far weaker than current EU requirements. Reflects Govt & EU priorities.

One respondent to Kibasi’s insight succinctly summarised the future dilemma this would pose for Corbyn:

So if this is agreed, and implemented (particularly ‘state aid’) does it then scupper Labour plans for political economy transformation? Assuming it then binds future Govts to these rules & could not be changed without tearing up the EU/UK relationship?

The election manifesto of @uklabour would appear impossible to implement if the #WithdrawalAgreement is ratified – especially so on state aid and public ownership.

This isn't taking back control for anyone – no Labour MP can vote for this, surely.

The Tory Brexit deal aims to tie the hands of an elected Labour government and stop it implementing its manifesto, while allowing for hard won rights and freedoms to be tossed on a bonfire to burn. This is an assault on democracy. https://t.co/GOcB6z4y1b

Indeed, Corbyn made reference to this himself, with a noticeable emphasis in his blistering response to May’s plan in the Commons:

Corbyn referencing how the withdrawal agreement would outlaw state aid in the economy #BrexitAgreement pic.twitter.com/edrksbE5VM

What is state aid?

The government defines state aid as:

any advantage granted by public authorities through state resources on a selective basis to any organisations that could potentially distort competition and trade in the European Union.

It also explains that:

Some state aid is illegal under EU rules because it distorts competition in a way that is harmful to citizens and companies in the EU.

To use state aid legally while in the EU, the government must:

a) Use “one of a set of approved EU mechanisms for state aid”.

b) Get “approval for the particular scheme from the EU Commission”.

These measures obstruct or stop the government from using the power of state finances to subsidise national utilities, industries and public services.

A key part of left-wing critiques of the EU

The left-wing critique of the EU, or ‘Lexit’ (left-wing Brexit), centres on the idea that EU rules could prevent the nationalisation of industry and the subsidisation of utilities based on the reasoning above.

However, critics of the Lexit position respond that these neoliberal obstructions could be re-negotiated, or they cite various instances where other EU states have overcome, or received permission to, nationalise or subsidise parts of their own economies (e.g. France’s national railways).

Whatever the truth of this debate, the risk of existing EU law obstructing a form of state socialism in the UK is clear.

However, May’s plan doesn’t alleviate the above concerns. On the contrary, it appears to enshrine in law the same obstructions to state aid after Brexit too, as a precondition of our future relationship. This can be seen throughout the agreement.

For example, Article 16 states in principle that: 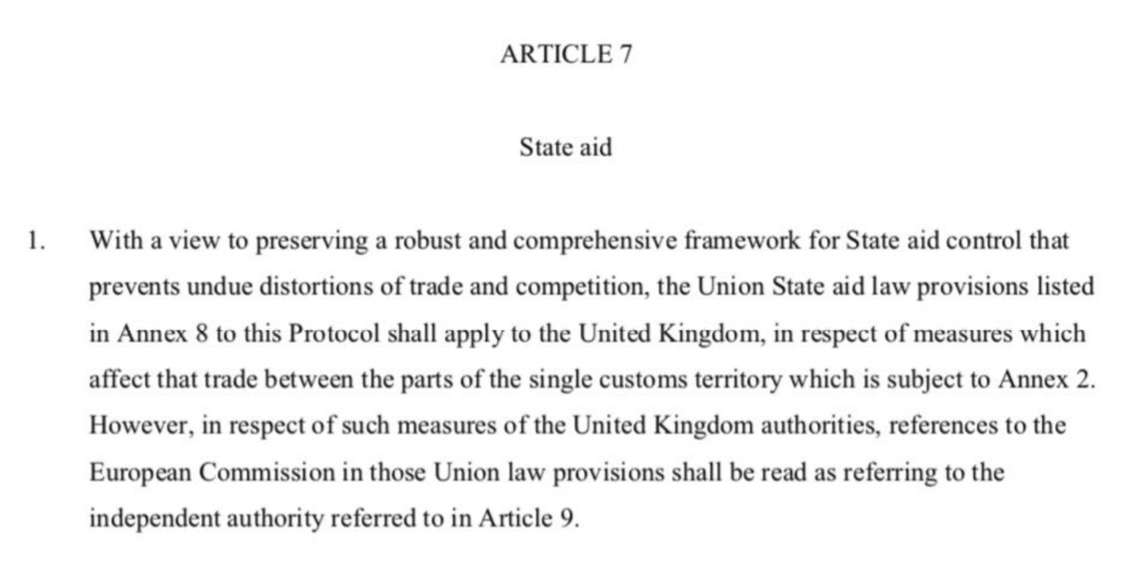 And most detailed of all is Article 17: 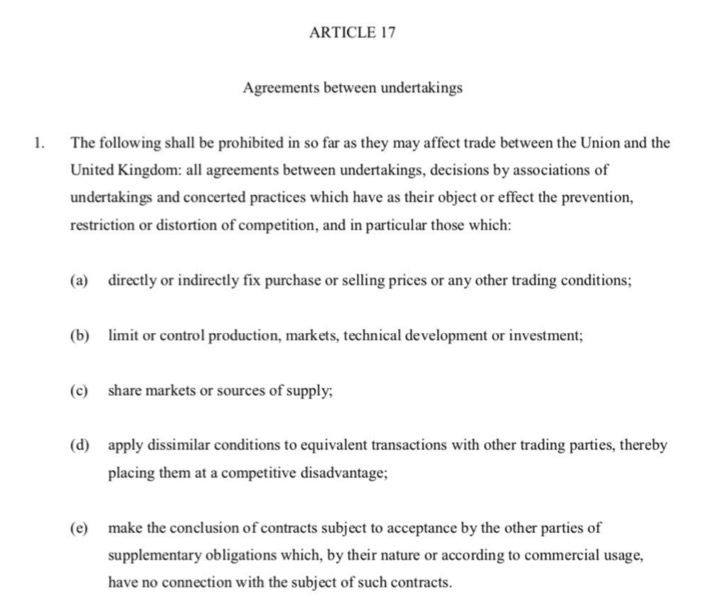 Meanwhile, subsection (b) prohibits the “limit or control [of] production, markets, technical development or investment”. This could potentially justify denying state subsidies for British industries, such as shipbuilding, renewable energy tech, and other high-tech sectors.

Such legal issues require further examination, because the document is 585 pages long. And the withdrawal text lacks clear detail in several areas.

But what this document does demonstrate is the neoliberal economic framework that both UK Conservatives and EU policymakers mutually consent to; a system which both enshrines the free market in law and legally deters state intervention. It also leaves open the possibility that, should a state step too far out of line with economic intervention, it could face economic sanctions.

So much for taking back control, eh?