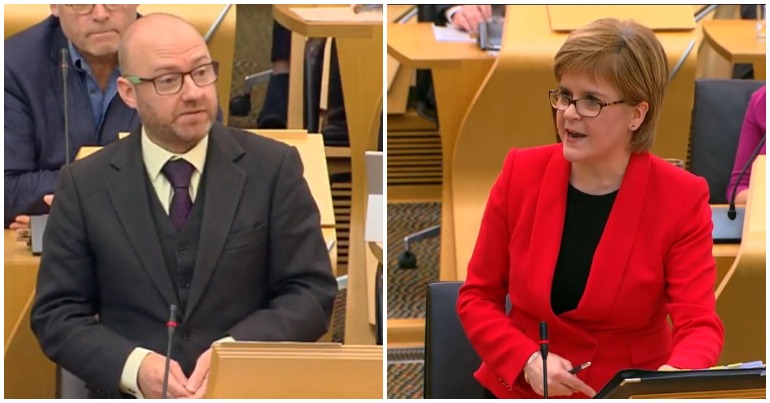 Scottish Green Party co-convenor Patrick Harvie pressed Nicola Sturgeon for answers at First Minister’s Questions on 15 November. It was over the “precise timescale” for the next Scottish independence referendum.

The Scottish Conservative and Unionist Party shared a video of the exchange on Twitter – no doubt trying to distract their supporters from the complete shitstorm going on in Westminster over Brexit:

With everything else that’s going on, the SNP need to take #indyref2 off the table. pic.twitter.com/NF891WJRxm

The Scottish Greens said they were ready to campaign “for Scotland to become a full, independent EU member country”.

“I hope the first minister is too”

Harvie went on to say the Greens were ready to hit the campaign trail with a positive message. But he then said “I hope the first minister is too”.

The chaos of Brexit was inevitable, but we also need to face up to the inevitable fact that Scotland will only get the strong future relationship we want with Europe – as the overwhelming majority voted for – if we get out there, campaign for it and persuade people to vote for it again.

The First Minister told Holyrood last year that her government will provide a ‘precise timetable’ for giving people a choice over our country’s future ‘at the end of the negotiation period’. That time has come and Nicola Sturgeon must tell us when people in Scotland will get the chance to opt out of this constitutional and economic chaos.

The case grows “stronger every day”

I will come back to the chamber and set out my views on that, the precise detail of that, when we have clarity.

Obviously we have now seen the terms of the deal. It remains to be seen whether that will go to a vote in the House of Commons in the next couple of weeks. We will see how that saga plays out then I will give that commitment as I said I would.

She also said that the case for Scottish independence grows “stronger every day”.

The Scottish Greens have now launched their campaign for independence on social media:

🗳️ Read why @patrickharvie is vowing to kick-start our #GreenYes campaign for Scotland to remain in the European Union as an independent member state🇪🇺🏴󠁧󠁢󠁳󠁣󠁴󠁿https://t.co/qSEJeuleOm pic.twitter.com/OqKCHTi6eq

It will be built on making a positive case for EU membership and immigration – a campaign that’s worlds away from the isolationist Tory Brexiteers.