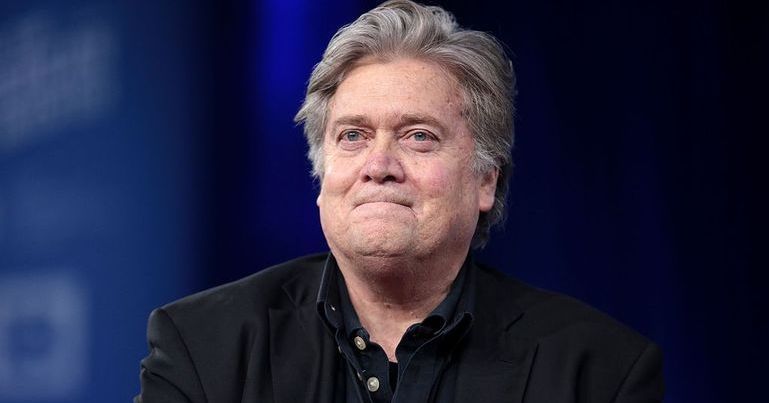 But Bannon’s presence wasn’t warmly received by the public in Oxford. In fact, several hundred people protested the talk, with organisers accusing Bannon of being a “white nationalist” and a “leading figure of the alt-right”. They argued that the protest would “send a clear message to Bannon that he and his views are unwelcome”. 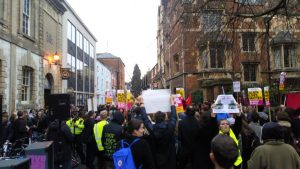 The protest organisers’ criticisms of Bannon are in response to his frequent racist, sexist and homophobic statements. They are also a response to Bannon’s support for far-right figures and political parties, including Donald Trump, Viktor Orban and the AfD.

Opposition to Bannon’s talk was widespread. A coalition of people came together to oppose the talk, from across political divides. The Canary spoke to several protesters to understand why they were demonstrating against Bannon. 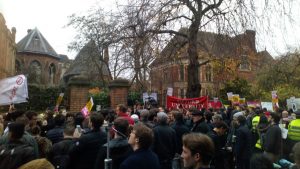 One of the groups behind the protest was the Oxford University Students’ Union LGBTQ+ Campaign. Their co-chair told The Canary:

We strongly condemn the Union for their decision to invite a known misogynist, homophobe, antisemite, and racist.

The Oxford University Labour Club was also one of the groups that coordinated the protest. Speaking to The Canary, Charlotte Austin, co-chair of the club, said:

We’re demonstrating today because the vile racist, misogynist and homophobe Steve Bannon has no place in our beautiful and diverse city. This is not a free speech issue, it is about giving a free publicity and a veneer of respectability to fascists. Lots of Labour members will be out today because we are deeply concerned about the rise of fascism and are an anti-racist party.

Steve [Bannon] is hell bent on sewing division, intolerance and hatred. He’s entitled to speak, but also I’m entitled to call him out to his face for what he is, a bigot and a racist. That’s exactly why I’m joining today’s protest.

A local activist Lucy Auger who took part also spoke to The Canary. She said:

Steve Bannon is a symbol and orchestrator of the far right, and while he is hosted by the Oxford Union today, we are outside demonstrating our belief that Bannon’s agenda is not acceptable.

The Oxford Union’s history with the far right

This isn’t the first time the Oxford Union has come under fire for inviting far-right speakers. In October, the Union was slammed for inviting the leader of the German political party AfD, Alice Weidel. That event was eventually cancelled as a result of pressure from the public.

Weidel and Bannon’s invitations are just the latest examples of the Union hosting speakers from the far right though. In 2015, members of the public protested an event with Marine Le Pen. Similar protests were held when Stephen Yaxley-Lennon (aka Tommy Robinson) addressed the Union in 2014. And in 2007, students disrupted a talk from Holocaust denier David Irving and BNP leader Nick Griffin.

Organisers of the demonstration against Bannon also highlighted the Union’s track record. The coalition of groups organising the protest told The Canary in a joint statement:

This is not the first time that students have been forced to tell the Union that neither their values nor those of their speakers are acceptable – see Alice Weidel’s recent cancellation due to public pressure – and we don’t believe that it will be the last.

Auger also shared these criticisms of the Union:

Bannon is just the latest in a parade of far-right villains hosted by the Oxford Union including Tommy Robinson and Marine Le Pen. We must show our opposition each time the Oxford Union falls over themselves to legitimise these figures in the name of honest debate.

The Oxford Union has seen years of protests and has even had to cancel events. But it seems the Union still hasn’t learnt that many people don’t want the far right spreading hate in their city.