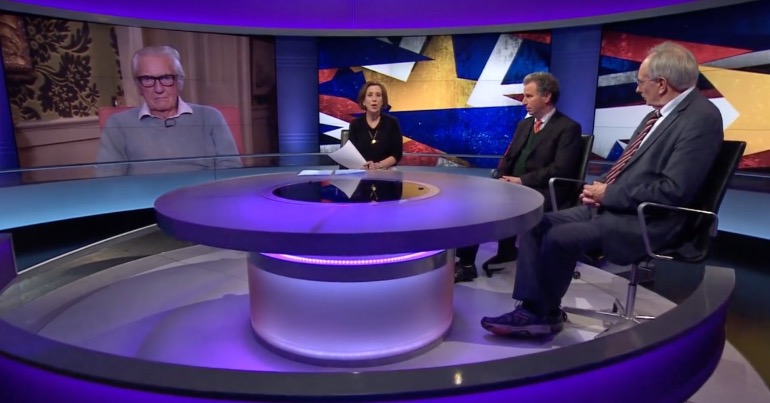 As the UK enters one of the defining moments of its history, the BBC‘s role to impartially inform the public has never been more vital. But during Newsnight on November 15, it didn’t just fail, it didn’t appear to even try.

No attempt at balance

We’re often told BBC bias is a myth. The BBC gets attacked from left and right, and so apparently it must be balanced somewhere in the middle. As a result, those on the left who criticise it are regularly dismissed as paranoid fantasists who imagine a vast conspiracy to exclude them.

Explain then why all seven guests on Newsnight on 15 November were linked to the Conservative Party, or hold conservative politics?

During one of the most tumultuous days in British political history, the BBC didn’t have one Labour party voice on the show, or anyone from the left.

The BBC even proudly promoted its line-up for the evening:

TONIGHT: It's been quite a day in Westminster and it's not over yet…

So who were they?

But could it find nobody outside the right wing to comment on these dynamics? And why should the BBC exclude the opposition parties from a Brexit discussion that affects us all at a critical stage in proceedings?

The online reaction was understandably one of disbelief and anger. Aaron Bastani of Novara Media got things underway:

And on the show’s discussion regarding the Conservative’s Brexit performance specifically, he said:

Tom Kibasi, of the Institute for Public Policy Research (IPPR), also highlighted the narrow demographics of those talking about Brexit on the show:

Kirsty Wark is having a discussion on the future of the country with three white men, each over 60, two of whom live in the same postcode. And all members of the Conservative Party. #diversity #Brexit #Newsnight https://t.co/4TDobLv07c

Faiza Shaheen, of the think tank Class, pointed out wider problems of public representation on the BBC beyond parties:

Brexit expert panels on #newsnight last few nights have someone to reflect on markets/ business, Westminster politics and Brussels… what about workers and the general public?!!

This is getting boring

If the BBC is fed up of being called biased, there’s a simple solution: stop making choices that make it perfectly legitimate to argue that it is. When the future of our country hangs in the balance, the public broadcaster has a duty to provide a balanced variety of voices – not just 50 shades of the Tory party.

– You can contact the BBC about issues with its broadcasting here.