Dimbleby outraged as Tory minister attacks him, but happily lets her smear Jeremy Corbyn - The Canary 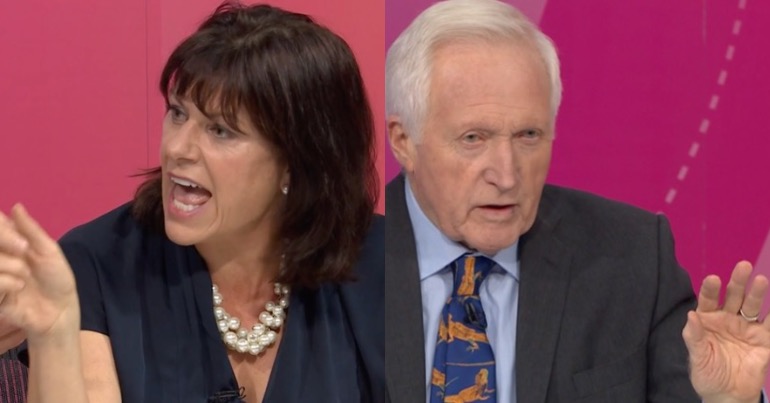 BBC Question Time (BBCQT) host David Dimbleby expressed his outrage when Tory minister Claire Perry seemed to imply he was sexist. But viewers quickly pointed out that Dimbleby failed to show the same concern when Perry explicitly accused Jeremy Corbyn of being an “antisemite”.

Perry: an insufferable class warrior on the side of the rich and powerful

The Mirror described Perry, a former banker, as “another unacceptable face of the Tory party” in 2010, adding that:

There is something particularly objectionable about wealthy Tories who add insult to injury when scrapping payments and services to those much less well-off than themselves.

So Claire Perry on #BBCQT right now. The former banker, who is married to a banker, doesn’t like the idea of poor people having children. pic.twitter.com/EJZVHovKB2

Tonight on #BBCQT for the Tories we are unfortunate enough to get Claire Perry.

Perry also has a record of unbearable media appearances, and her latest invitation to Question Time was no exception.

Her appearance came in a context where her party’s shambolic Brexit soap opera had embarrassingly imploded through the national media in front of the British public. And Perry seemed visibly rattled. She lacked composure, compelling excuses, respect for other panelists, and she lashed out at her opponents with smear tactics.

It was utterly contemptible for @claireperrymp to resort to despicable smears on #bbcqt tonight when she was unable to defend her govt's abject failure on Brexit.

One member of the public who attended the live filming of the programme felt compelled to phone in BBC Radio 5 Live to express her contempt for Perry’s performance:

Fairly early on in the programme, Dimbleby attempted to rein Perry in. But her petulant response took him and the audience by surprise:

Dimbleby didn’t find much humour in the situation.

Interestingly, Perry has previously implied that other men who challenge her are sexist. We can see this below during a confrontation with Labour’s John McDonnell on the night of the local elections in 2017:

And also here during another exchange with Labour MP Barry Gardiner:

Claire Perry: “stop mansplaining… I know what they’re doing because I go to cabinet” pic.twitter.com/8Yo7DA0MGM

Or during a previous appearance on Question Time, where she called the BBC “fake news” and again referenced “men shouting at each other”:

Perry just warming up for her final “antisemitism” smear

But Perry seemed to deliberately save her most outrageous smear until the end – almost as though it was pre-planned.

And her accusation against Jeremy Corbyn caused an uproar in the studio audience and from viewers at home:

On a day in which the people running the country (badly) are actually resigning….certain MP's still do not learn. MP Claire Perry…take a bow for being an idiot. pic.twitter.com/TLemSfGPcB

This is utter desperation on the part of a Conservative Party in a tailspin of panic and nothing more https://t.co/ptz2108JTY

It is only considered slander when it is only spoken and not recorded. It is therefore almost impossible to prove. Since the show was recorded and broadcast, in this case it would be considered libel

Others noted the hypocrisy of Tories ever trying to take the moral high-ground on the subject of racism:

Claire Perry's party was the only government in Western Europe to help prop up well-known antisemite Viktor Orban's far-right govt in Hungary. Her party are currently selling arms to Saudi Arabia who are bombing children in Yemen. The woman is a disgrace and a hypocrite. #bbcqt

But others felt that the BBC didn’t fulfill its own obligations after Perry’s outburst. As Evolve Politics commented:

For a public broadcaster to not issue a legal clarification on a direct accusation is astounding.

We would be entirely unsurprised if Labour’s lawyers were on the phone already.#BBCQT

And others have consequently complained to the BBC about the incident:

I have complained about tonight's episode of #bbcqt & Claire Perry's remarks. Please join me in complaining. https://t.co/KJAaz8lIE2

Ultimately, only Claire Perry is responsible for her words on TV. But it is notable that, despite Dimbleby’s own discomfort with Perry, he did not offer any counter-argument or legal clarification to her charge against Corbyn.

The incident echoes Carole Cadwalladr’s recent protests that the BBC did not offer her a right of reply after she felt Brexit supporter Arron Banks smeared her on the Andrew Marr Show:

The refusal by the BBC to give me a right to reply to @arron_banks' baseless smears is extraordinary. It's not just bad journalism. And it's not just bad media law. It is deeply troubling. Banks attacks me to suppress the story about his links to Russia. It's worked
8/ pic.twitter.com/NdkqN5YpZh

The BBC urgently needs to clarify which legal procedures people should follow when it becomes a platform for guests to smear their opponents. Because the current situation is totally unacceptable.

– Support the Canary’s fierce journalism to hold the powerful to account.

– Complain to the BBC about this issue.