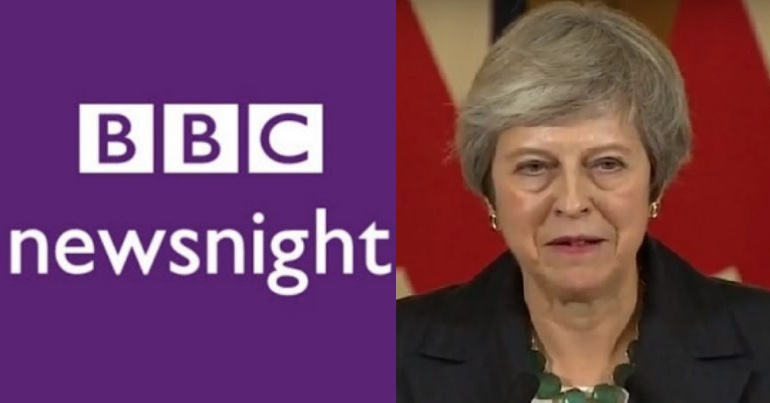 People are calling out a Newsnight presenter after she sent a tweet that appeared to fawn over Theresa May. Following the prime minister’s press conference on 15 November in which she vowed to carry on fighting, Emily Maitlis tweeted:

"Am I going to see this through? Yes". There's something magnificent and impressive about this level of stubbornness.

May is presiding over a government in chaos. Multiple ministers have resigned. It’s looking increasingly likely that she’ll face a vote of no confidence. And her Brexit plan isn’t impressing anyone on either the Leave or Remain side of the debate. So it didn’t take long for people to start calling out Maitlis’s suggestion of ‘impressive magnificence’:

What a fawning sycophantic tweet. Magnificent? Impressive? Must be an extremely low bar to impress you.

…magnificent, impressive, courageous…???
What is actually wrong with you people….?
How about just insanely stubborn and deluded…

Others thought the tweet was representative of BBC bias:

The once great #BBC really is nothing more than a #TORY spin machine.

People also pointed out that the tweet came just days after Maitlis faced accusations of anti-Corbyn bias on Newsnight. On 13 November, she stated:

"You're going to fail the country on this one possibly, and put Jeremy Corbyn in power" – and the BBC complains about Fake News!

There speaks a true Tory .Astonishing that a BBC presenter makes no secret of her partisan politics .I remind you of you being roasted ( owned ) by Barry Gardiner during the last Election .

If the shoe was on the other foot…

As The Canary previously reported, there has been some criticism of the way the media describes May; especially when we compare this to the language it uses to describe Corbyn. And several Twitter users highlighted this point in responding to Maitlis’s tweet:

How strange that you admire her blind desperation to cling on to power at any cost (to other people) yet you attack Corbyn a good man who has had every kind of disgusting smear levelled against him & retains his dignity & integrity. #GTTO

When Corbyn won the 2 leadership elections I can't remember you offering him similar platitudes. Do us a favour, at least TRY to hide your political bias?

Another Twitter user gave an example of Corbyn showing ‘magnificence’ in his own stubbornness:

Jeremy Corbyn showed magnificent and impressive levels of stubbornness when faced with an internal coup by his MPs. He could do this because he knew he spoke for millions. Theresa May doesn't, so her stubbornness is desperate and pathetic.

But it’s not just the Brexit negotiations that are in chaos. May and the Conservative government have wreaked havoc on millions of people through their stubborn commitment to neoliberal austerity. And the prime minister is presiding over a government that the UN has condemned for treating vulnerable and poor people in a “punitive, mean-spirited and often callous” manner.

There is nothing “magnificent” or “impressive” about May or the government she is leading. And while BBC journalists don’t appear to have any obligation to manage their Twitter accounts as unbiased reporters, this type of tweet reveals exactly why so many people are fed up with our supposedly impartial public service broadcaster.

Featured image via BBC/YouTube and screenshot