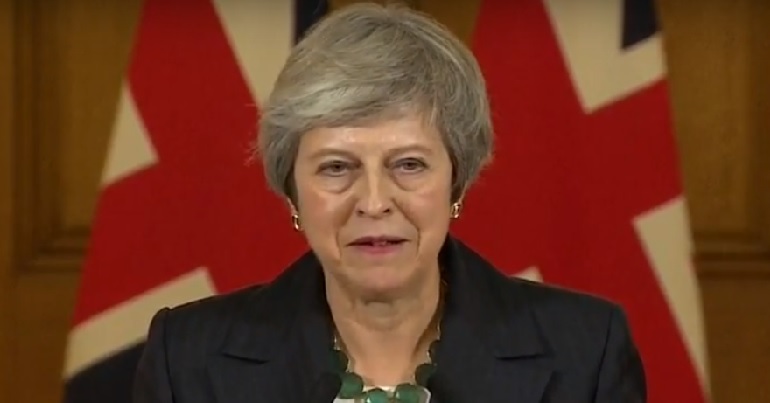 Against all odds, Theresa May is still refusing to step aside as prime minister amid Brexit chaos. But one Twitter user demonstrated exactly why she’s able to do so. And it’s all to do with the media:

When Theresa May's party is raging against her:
She is very brave and principled, dealing with her internal enemies.

When Jeremy Corbyn faces the same:
He's lost his MPs and should resign for the good of the party

With resignations and rumours of a no-confidence vote, Theresa May is facing a chaos over her Brexit plan. But some in the media are still describing her as “dogged and brave” or “triumphant“. Considering the 24/7 negative coverage whenever something remotely bad happens to Jeremy Corbyn, it is hard to imagine the media calling him “brave” if he was in the same situation as May. Yet this is the language some are using to describe the prime minister, even though she’s facing the very definition of chaos.

In the middle of a hurricane, Theresa May opens an umbrella

On Thursday 15 November, May’s Brexit plan met with overwhelming opposition from the left, right and centre of British politics. And some of the strongest opposition came from her own party. But rather than accept that the sums simply don’t add up and there’s no way she can get parliament to support her plan, she dug in.

Many people around Britain expected (or hoped) that May would step down as prime minister in a speech late on Thursday. But she didn’t. First, she kept everyone waiting. Then, she simply blabbered on about doing ‘the best for the country’ rather than for her party or herself, all while defending her resounding failure of a Brexit plan. As The Canary‘s John Shafthauer put it:

She's turned up 25 minutes late just to not fucking resign

There were few voices on Twitter that weren’t either annoyed, bemused, or disappointed by her speech:

This is supposed to rally the troops? Theresa May crammed about every Leave cliché going into that briefing. It was just mush. We've heard it all before, only now it's even more insulting to our intelligence. She's stuck. #MayStatement #BrexitAgreement #BrexitDeal #BrexitChaos pic.twitter.com/08VY1USRp0

"Leadership is about taking the right decisions, not the easy ones," says Theresa May. What right decision has she ever made during her farcical, never-ending Benny Hill sketch of a premiership? Literally, just one right decision?

The PM conference is a complete flop a non-entity, it was a re-run of what she said today in the house. The Tories are in chaos on #Brexit just repeating the same line over and over again "in the national interest" will not wash, it is now time for the PM to go #BrexitChaos

If we can say one thing about May, though, it’s that she doesn’t give up easily – even when everything around her seems to be burning down. And that has now become the subject of dark humour:

Things can only get worse

With May stubbornly holding onto power, people are speculating that things are only going to get more heated in the coming hours and days:

But with the media giving May a relatively easy ride, it looks very much like she’ll just keep bumbling on. And it’s the British people who will suffer the consequences of the resulting chaos and instability.