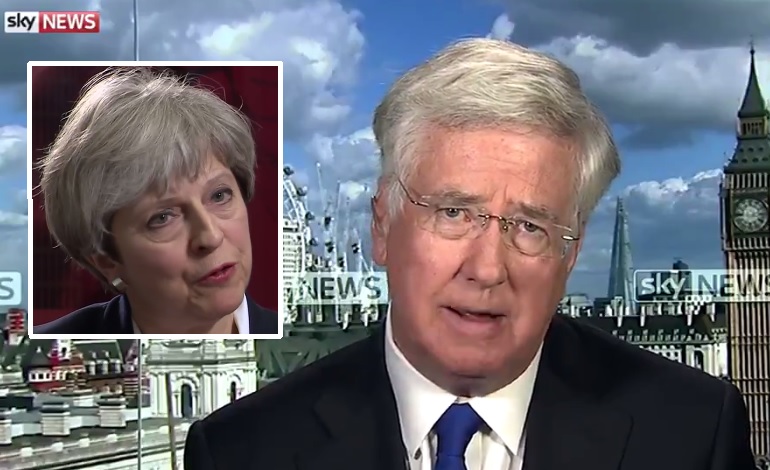 Defence Secretary Michael Fallon betrayed Theresa May on 27 June. Because after much bluster and spin in an interview on Sky News, Fallon revealed May’s true motivation for the £1.5bn deal with the Democratic Unionist Party (DUP).

The Defence Secretary admitted that May struck the deal to shore up the Tories’ power. This is not a first for the Tory Party, though. Almost 100 years ago, in 1921, an Irish Unionist politician accused the Tories of doing the same. And that political manoeuvring ended with the break-up of Ireland.

Saving the best until last

In the Sky News interview, Fallon first attempted to argue that his government’s newfound £1.5bn agreement with the DUP, including £1bn of new money, was for the good of everyone. He said Northern Ireland needed investment, and that the injection of funds would benefit all citizens there, not just the DUP. He also claimed that the UK as a whole would gain as a result. Furthermore, he tried to argue that all parts of the UK request and receive central government funding too.

"This is not money for the DUP, it's investment for N.Ireland," says Sir Michael Fallon ON where the £1.5bn for the DUP deal has come from pic.twitter.com/H8u4yAzJQB

The presenter then questioned Fallon on whether the payment was necessary as “the chances are” the DUP would support the Tory government regardless because of its opposition to Labour leader Jeremy Corbyn. The presenter asked: “so why are we spending all this money?” Fallon responded:

Well, you say ‘the chances are’, you know we can’t take a chance. Our job is to carry the Queen’s business through… on these big issues, we do want to be very sure that if there’s ever a vote in the House of Commons, that we can rely on the DUP for support.

That’s important, to ensure that this government can go forward now over the next, over the five years of this parliament knowing on the really big issues that it can’t suddenly be ambushed late at night.

Fallon’s explanation was clear. He admitted that the £1.5bn “bribe” was insurance for his government. It guarantees that the DUP will vote with the Tories, so as to keep them in power for the next five years. And it protects the Tories from the ‘late night ambush’ Fallon says they fear.

So essentially, May’s government is hoping the pay-off will protect its power. But the DUP might not be so lucky. If history tells us anything, that is.

Responding to news of the deal, Republican Party Sinn Féin warned that it “threatens the Good Friday Agreement”. Signed in 1998, the agreement set up a power-sharing arrangement in Northern Ireland between Nationalist and Unionist parties, overseen by the Irish and British governments.

But Sinn Féin also warned the DUP specifically over the deal. In a statement, it said:

As they return to Ireland to meet with Sinn Féin and the other parties, the DUP should be minded of the words of Edward Carson speaking in 1921 on the Tory intrigues that had led him on a course that would partition Ireland: ‘What a fool I was. I was only a puppet, and so was Ulster, and so was Ireland, in that political game that was to get the Conservative party into power’.

Edward Carson was an Irish Unionist politician. He was closely allied to the Tory Party, sharing its anti-Home Rule position. But while the Tories rose to power in 1922, Carson saw his hopes dashed as much of Ireland severed its ties with the UK.

The ramifications of the Tory/DUP agreement will become clearer if or when it continues. But it’s already brought a sense of imbalance and insecurity to Northern Ireland. The DUP is surely hoping any changes will fall in its favour. As Carson eventually discovered, however, that’s not a given. Because, as Fallon revealed, that’s not the point. The point is the Tories’ self-interest, plain and simple. That’s the Conservative Party’s priority, regardless of the impact on other parties or, indeed, on the citizens it is meant to serve.