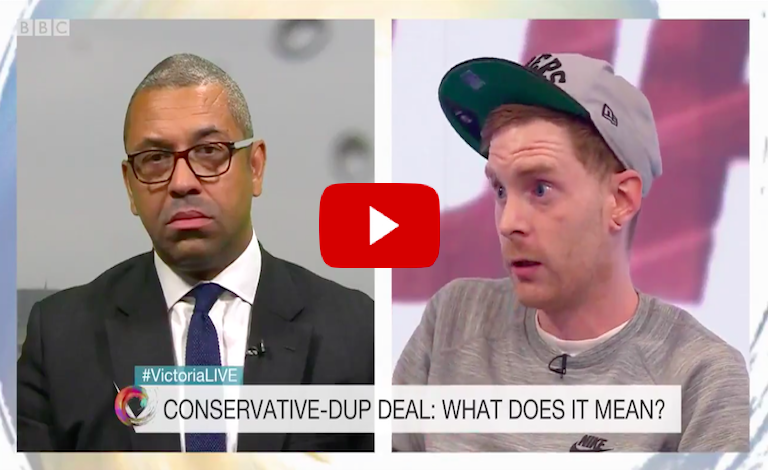 In the face of a growing backlash, Conservative MPs are being wheeled out across the media to try and justify their deal with the Democratic Unionist Party (DUP). It’s not a cash-for-votes bribe, they insist. It’s about doing the right thing and investing in a deprived Northern Ireland.

But one MP got more than he bargained for when he appeared on the BBC‘s Victoria Derbyshire show on 27 June. A fellow guest on the show, introduced only as “Elliot”, cut through the rhetoric to expose the extreme hypocrisy of the Conservatives’ argument:

Northern Ireland has not become deprived overnight. It has been deprived for the entire time you have been in government.

So why is it suddenly now, when Theresa May needs to cling on to power… Why now, after seven years of power, are you so interested in injecting £1bn of public money – it’s not Conservative money, it is public money – that could be distributed to mental health nurses, to schools, to public sectors?

Elliot went on to answer his own question:

The £1.5bn deal, with £1bn of new money, will see Northern Ireland – which already receives more funding per head than any other part of the UK – receive an extra £530 of funding per person over the next two years. It has provoked an intense backlash across Britain – particularly in Wales and Scotland, which won’t see comparable rises in their own funding.

Faced with the facts, Cleverly argued that:

Northern Ireland has some of the most significant issues because of its history. You mentioned mental health services. It has the highest suicide rate per capita in the whole of the UK. And it’s entirely appropriate that we recognise the unique circumstances of Northern Ireland.

This is true. Northern Ireland does desperately need investment, and its suicide rates are a tragedy. But this has nothing to do with why the Conservatives are investing in it, as Elliot pointed out:

That’s all very admirable… But if you were doing it off your own back… if you’d won this election and you’d turned round and said, ‘D’you know what? Northern Ireland is so deprived, we need to invest immediately because it’s… a terrible place.’ But that’s not what’s happened.

Cleverly was eventually forced to admit the obvious: that the Conservatives are spending money on Northern Ireland to keep Jeremy Corbyn out of Downing Street:

I have absolutely no doubt that a government led by Jeremy Corbyn would have been a catastrophe for this government [sic]. And that’s why… we have entered into an agreement with another political party in the UK to form a stable government.

'Why are you spending £1billion of public money just to cling on to power?

The deal with the DUP is about keeping the Conservatives in power, plain and simple. To suggest it was in any way motivated by a desire to reduce Northern Ireland’s horrifying suicide rates is cynicism of the highest order. So well played, Elliot, for exposing the government’s hypocrisy for the whole country to see.