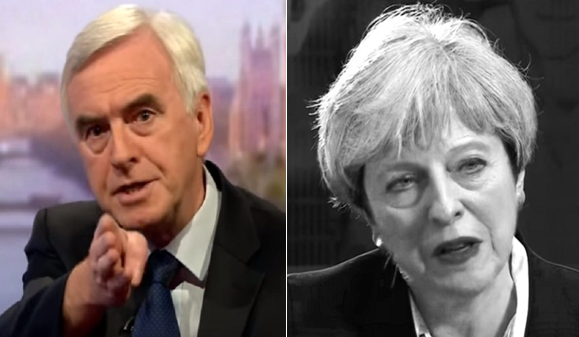 John McDonnell has given his verdict on Theresa May’s Conservative government, propped up by the DUP. The Shadow Chancellor has called for them to “step aside” and let Labour form a government “for the many”. And he has a clear way of trying to achieve this.

The Tories have “failed”

McDonnell was speaking to the People’s Assembly, ahead of a demonstration being organised for Saturday 1 July. He told the campaign group he wanted a “million people” to march against May’s government in the hope of toppling them:

The public have lost trust in Theresa May and the Conservatives. People are fed up with a pay freeze; poverty wages; an NHS in crisis; being shackled with lifelong debt and no secure home. The Tories had their chance and they’ve failed. It’s up to every one of us to make sure they step aside, so we can have a government that cares for the many not the few.

The Conservative-DUP agreement has already been dogged by controversy. From the Tories handing over £1.5bn to essentially ‘buy’ DUP support, to May cancelling the Queen’s Speech in 2018, to her considering extending parliament’s summer recess to 12 weeks, the public are seemingly losing trust in the PM’s government. Opinion polls on who would make the best PM have seen Corbyn take a lead over May. And they’ve also given Labour a lead over the Tories, and shown that the public think May is doing a ‘bad’ job while Corbyn is doing a ‘good’ one.

So in response to the Tories’ ‘zombie‘ government with the DUP, the People’s Assembly has organised a “carnival of resistance” on Saturday 1 July. Called ‘Not One Day More’, it starts at 12pm outside BBC Broadcasting House in London W1 and ends at Parliament Square. Organisers hope it will demonstrate the public’s “anger and distrust” towards the government. The People’s Assembly said in a statement:

The demonstration is… supported by every major trade union including Unite, Unison, GMB, PCS, NUT, RMT, TSSA, FBU, CWU. McDonnell has called for a million people to march against the Tories. He will address the demonstration in Parliament Square alongside representatives from campaigns, community groups and other parties. The demonstration will be a ‘carnival of resistance’ representing the huge ‘anger and distrust’ towards the Conservative Party and DUP.

There will also be an appearance from Captain Ska, whose song Liar Liar GE2017 hit the top five of the UK charts the week before the general election. The People’s Assembly will also hold a minute’s silence for the victims of the Grenfell Tower fire, followed by a minute’s “applause” for the emergency services that responded.

The summer of our discontent?

Over 50 coaches from across the UK will take people to the demonstration. But the protest could mark the start of a summer of public disquiet over the Tory-DUP deal. Because the People’s Assembly is hoping for a record turnout at the protest. It said that it “is just the start of a huge campaign that won’t stop until the greedy Tories are out of office”. And with McDonnell calling on everyone to “join him” on Saturday, both London and the PM could be in for quite a day on 1 July.

– Confirm your attendance to the People’s Assembly demonstration.

– Find out more about the protest.