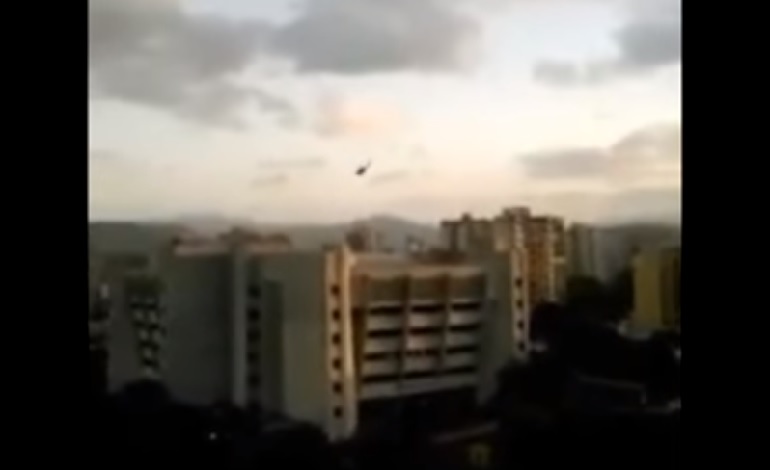 On 27 June, Venezuela was hit by a “terrorist attack” on its Supreme Court. But you’re unlikely to see the whole story in the mainstream media. Most probably because the oil-rich country is a high-level target for US intervention; and because misunderstanding of the situation in Venezuela is key to the agenda of right-wingers – from the UK to the US.

An experienced pilot and police officer allegedly stole a helicopter and dropped grenades on the Venezuelan Supreme Court. President Nicolás Maduro accused the suspect of trying to start a coup, and condemned the action as a “terrorist attack” with links to the US.

The alleged attacker has no confirmed links to particular international or local groups, but said [Spanish] that he was part of an anti-government “coalition of military, police and civilians”. This group defines itself as “nationalist”. And on the day of the attack, suspect Óscar Pérez (pictured below) posted Instagram videos calling on people to rise up against the government.

A context of polarisation and US hostility

As The Canary has previously reported, there is currently unrest and significant political polarisation in Venezuela (often encouraged by the US and its affluent local allies). Dozens of pro-government and anti-government citizens have died in recent months as a result.

The apparent reason for unrest is that many citizens have had difficulties finding and paying for basic food items and other everyday products; although news network TeleSur insists that food security is “still far better” than it was before the current government came to power. Anti-government forces blame President Maduro for the economic difficulties, but he and his supporters argue that they’re a result of “a dramatic oil price drop and speculation and hoarding”. This, Maduro says, is tantamount to an economic war against his government.

And indeed, the US has shown hostility towards Venezuela ever since Maduro’s party first won elections in 1998. A US-backed coup in 2002 was just one of many attempts to destabilise the government. The reason? Venezuela is only days away from the energy-guzzling US, and reportedly has the largest oil reserves in the world; along with a number of other natural resources. But in the last two decades, Venezuela’s ruling party has gone against the interests of US multinationals. It used oil revenues to reduce poverty and strengthen the country’s system of social welfare; and it introduced a constitution guaranteeing citizens the “right to demonstrate, peacefully and without weapons”.

Maduro won the 2013 presidential election by a narrow margin, but his party lost in the parliamentary elections of 2015. Ever since, the US and its allies in the Venezuelan opposition have been ramping up hostility towards Maduro’s presidency. But according to a recent poll, citizens overwhelmingly oppose the country’s violent protests and any international intervention to remove Maduro.

Hypocrisy in the international community

The US has placed sanctions on Venezuela for at least a year, and President Barack Obama even declared the country a national security threat in 2015 (although it had never attacked the US). President Donald Trump, meanwhile, said in May 2017 that:

Recent actions would suggest that Trump’s ‘fix’ is just more interference and more sanctions. On 21 June, for example, the US tried to persuade the Organisation of American States (OAS) to condemn Maduro’s government. But Venezuelan Foreign Minister Delcy Rodriguez used the opportunity to point out Washington’s double standards, saying:

You are saying that Venezuela is going through a humanitarian crisis. But forgive me, Venezuela does not have such horrendous records [as Honduras]… As for the Human Development Index, Honduras ranks 130, while Venezuela is 71.

Honduras has one of the highest murder rates in the world. But US officials allegedly helped to install a pro-US regime there through a 2009 coup, so Washington’s silence on the Honduran human rights situation is not at all surprising.

Venezuela also turned the tables on the US, seeking to pass resolutions opposing Trump’s anti-immigrant policies and his withdrawal from the Paris Climate Agreement. And another resolution targeted the Mexican government – a vocal critic of Venezuela, expressing solidarity with 43 student teachers who were forcefully disappeared in 2014. Mexico has a dismal human rights record, stands accused of rigged elections [Spanish], and is reportedly the most difficult and dangerous place in the world to be a journalist. In fact, the burnt remains of one kidnapped reporter were found only days before the OAS met in Mexico. But because the current Mexican government has not gone against the interests of US multinationals, sanctions from Washington are nowhere to be seen.

When will the mainstream media expose these double standards?

According to historian Stella Krepp from the University of Bern, the international hypocrisy regarding Venezuela is obvious. She said:

It is clear that Venezuela has been singled out specifically, because human rights violations and democratic deficits pervade Latin American countries

Daniel Hellinger from the Center for Democracy in the Americas, meanwhile, believes the focus on Venezuela is an attempt to justify international intervention; mainly because it’s not a US ally and has massive oil reserves.

Essentially, it seems that Washington’s decades-long policy of manipulating Latin American politics is still alive and kicking. In the past, this meant coups against elected governments and support for right-wing dictatorships. Today, the rules may be a bit different because of higher scrutiny, but the overall aim is the same: to keep its ‘backyard‘ under the control of malleable allies rather than independent adversaries.

The hypocrisy, however, is clear as day. The US is highly selective when it comes to human rights: hiding or ignoring its allies’ abuses while exaggerating or obsessing over those of its adversaries in order to justify regime change. And the UK is the same: using Venezuela to make cheap political points while avoiding talk about the widespread abuses of British allies.

These double standards may be obvious to most of us. But don’t expect to see the whole story in the mainstream media any time soon.

– Question everything you hear in the corporate media. And support independent media sources.