At PMQs, a Conservative MP claims she was abused during the election campaign. But there’s one massive problem [VIDEO] - The Canary 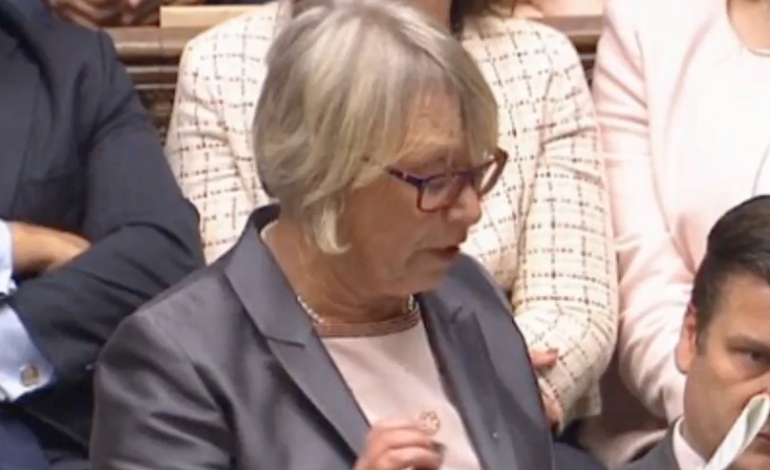 At Prime Minister’s Questions (PMQs), one MP asked a question regarding the level of abuse she received during the election campaign. All abuse absolutely needs to be condemned. But there is one massive problem. The MP in question faces questions about her own behaviour – and her team has even faced an investigation over an alleged assault at a hustings.

Sheryll Murray, MP for South East Cornwall, made several allegations of abuse during the campaign. In particular, she claimed:

Over the past months, I’ve had swastikas carved into posters, social media posts like burn the witch… People putting Labour Party leaflets on my home, photographed them and pushed them through my letterbox. And someone even urinated on my office door. Hardly kinder, gentler politics.

Can my Right Honourable friend suggest what can be done to stop this intimidation which may well be putting off good people from serving in this place?

But The Canary spoke to Leah Browning, one of Murray’s constituents. And while condemning any abuse, Browning pointed out that many local people feel they have been ignored by Murray:

Whilst I do not condone such behaviour to deface posters etc, I do understand and share frustrations from people who essentially are silenced and trodden on by the MP and her voting record. If your views do not match those of her own, she blocks you on social media platforms, sends out blanket non-response letters and now will no longer even be accountable at local hustings. Sheryll has removed any opportunity for scrutiny or accountability and has made herself actively disengaged and unavailable to a number of constituents.

In fact, during her appearance at her local hustings, it was Murray and her team who faced allegations about their behaviour. She made headline news after she claimed she was “pleased” there were food banks in her constituency. At the same hustings, she said to the audience “don’t be so rude” after they applauded a teacher. She told another person to “sit down” when they asked a question she didn’t like about Saudi Arabia. Meanwhile, she threatened to call the police on a disabled woman who was questioning her. And if that wasn’t enough, her team was also investigated for an alleged assault over an incident at the hustings.

Her comments about food banks and her behaviour at one of the only two hustings she attended was utterly appalling and not fitting of an MP. Sheryll has, I feel, closed her door on a large proportion of her constituents, particularly the disadvantaged and disaffected. There is a lot of anger and upset amongst individuals and families walking the breadline, who have no representation.

Browning also challenged Murray’s claims that someone had urinated on her office door as a political statement:

Sheryll has chosen to have her office next door to Liskeard’s only bar/club, [which is] open ’til the early hours of the morning and I am unsurprised that a nearby doorway be used in such a way. However, it does seem to be a considerable assumption that it is in some way an attack on her…

So unless someone left a note for Murray claiming that they pissed on her doorway as a political act, this does seem a dangerous assumption. And a cynical one, given that Murray is using it for political point-scoring.

There is a very real and very nasty social media culture of attacking people, especially women in the public eye. And it is one we all need to challenge. Any abusive comments Murray received on social media should be condemned. But it is also worth pointing out that having a political difference is not abuse. And as Browning points out, this is an MP known for blocking people on social media because they have different views.

It is also worth pointing out that this is not a problem with the ‘far left’, as Murray implies. It is a problem across the board. And it only takes a quick look at the scale of abuse Diane Abbott received during the campaign to see both how massive the problem is and how far-reaching it is.

Online abuse has made me suicidal more than once. I have taken the pills. I have stood on the train bridge. I have been driven insane. I have had periods where I have been unable to work because I am such a wreck from sustained hatred and vitriol. I have lost work. I have been literally driven insane by hatred from strangers. It interrupts, it diverts, it permeates, it seeps in, you bullying bastards. It’s there when you’re reading bedtime stories to your kids. It strangles you in your sleep. It follows you in your hand, in your head. It slowly destroys you from the inside, a rot starts to set in. You become scared to say anything, scared to be anyone. You hide. You cry.

This is not a ‘one size fits all’ political issue. It is a disgusting trend that is having a massive impact on people’s lives. It needs to be tackled. But using it to try and score political points against the left when abuse is so widespread across the political spectrum is cheap and disingenuous. And it degrades all those who have suffered online abuse.

Any abuse Murray has received is wrong. But the reality is that there’s a massive problem with her claims. Her very well-documented behaviour at hustings and her treatment of her constituents speak volumes. Her further claims that her office was urinated on are wildly presumptuous. And putting Labour leaflets through her letterbox? It’s hard to see how this is even considered abuse.

Murray has used an issue that is causing people real distress and illness to score cheap political points. Her comments regarding “kinder, gentler politics” are a cheap dig at the Labour Party, when this is a cross-political and cross-society problem. And that is shameful.