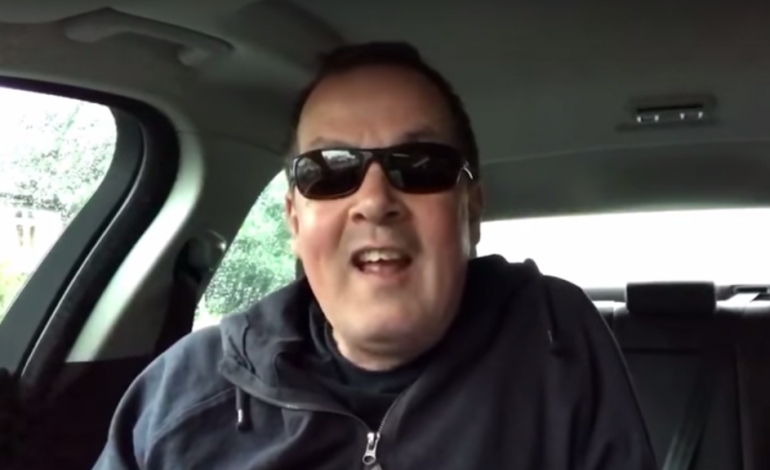 Mark McGowan, a performance artist also known as ‘The Artist Taxi Driver’, has uploaded his latest rant to YouTube. And in the video, he perfectly sums up the Tory mindset, saying:

It’s raining. It’s raining like it’s going to rain forever. And that’s a metaphor for the Tories, who are still living in ‘cloud fuckyou land’.

McGowan says the Tories are busy fighting between themselves over Brexit while “the country’s heading towards an economic and moral abyss”. And though there may be some exaggeration there, it does indeed seem that May’s election gamble is a threat to economic growth.

But the main thrust of McGowan’s argument is that the Tories don’t have our interests at heart. Theresa May has agreed to give the regressive DUP £1.5bn of taxpayers’ money in order prop up her minority Tory government. It’s giving away our money – which could fund 26,000 nurses – to a terrorist-linked party. But as McGowan stresses, this government is also depriving us of our livelihoods in so many other ways.

UK house prices are expected to rise by £50,000 by 2021. The government has pledged to build new homes, although May’s migration target means that there won’t be enough people to build them. The Tories have also U-turned on their promise to build more affordable social housing. The sad truth is that anxieties about housing affect everyone, except the very wealthy.

If the children are our future, then the Tories can’t care about the country’s future very much. Because they’ve planned to scrap free school lunches, an initiative which has been shown to boost educational performance and improve pupils’ behaviour. Also, the Institute for Fiscal Studies (IFS) has said that school funding would fall by 7% by 2021/22 under the Tories. And parents aren’t having any of it.

Following the London Bridge and Manchester terror attacks, national security is now a top priority. And this is why May has come under fire, given the cuts to policing (particularly in regards to the reduction in armed police officers). These cuts reportedly put national security at risk.

During the election special of BBC Question Time, May told a nurse in the audience who hadn’t had a pay rise in eight years that “there isn’t a magic money tree”. Apparently, though, a billion pounds can ‘magically’ appear when required to bribe the DUP.

It’s hard to see how the government cares about nurses, who can expect to see their wages cut by 12% by the end of the decade. Chronic under-staffing in the NHS means that nurses have such heavy workloads that two thirds have considered leaving. These staff reductions and increasing workloads are also causing patients to suffer.

McGowan expresses his dismay at the current situation we’re in, where low wages, no pay and zero-hours contracts are all too common. And the rich really are getting richer while the poor are getting poorer.

Given the government’s track record and plans for the future, it seems McGowan’s right: the Tories really are living in “cloud fuckyou land”.

– Join the Million March on London on July 1st