Jeremy Corbyn laid a trap for Theresa May at Prime Minister's Questions, and she walked right into it [VIDEO] - The Canary 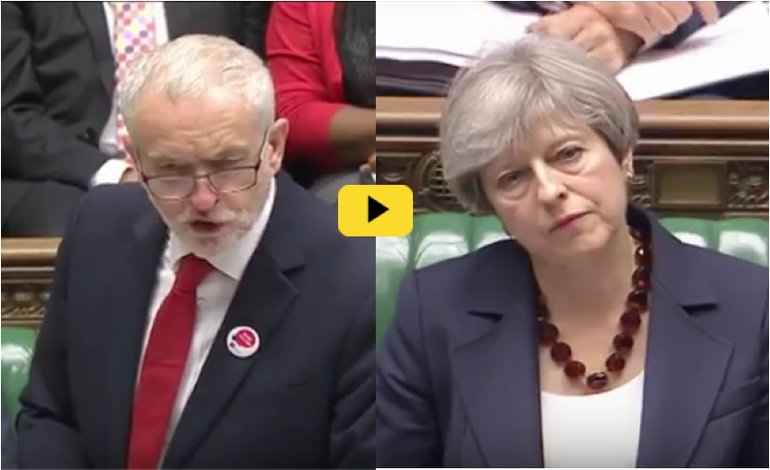 For the first time since losing her parliamentary majority, Theresa May faced Labour leader Jeremy Corbyn for Prime Minister’s Questions. And it didn’t go well.

The Labour leader began with a series of forensic and detailed questions about the causes of the Grenfell Tower inferno. He also highlighted the emerging scandal of every building tested since failing safety tests for combustible cladding. Discussing what he called a “horrific and utterly avoidable tragedy”, he laid one question after another on the Prime Minister.

Corbyn then asked the PM to settle conflicting advice over fire safety regulations and combustible cladding. Theresa May answered that it was “non-compliant” with regulations, and that regulations were not the issue. A theme she continued to work throughout her answers.

By focusing on the long history and wide geography of the crisis, May hoped to move blame as far as possible from the Conservative government’s austerity programme. Her intended message was clear: this is about a failure of enforcement at a local level, and it is not a party political issue.

After continued probing on the issue, May exclaimed at Corbyn:

I think he’s somewhat missed part of the point to this, which is that it’s not just a question of what laws you have. It’s how those are being applied. That is the issue. We have the building regulations about compliant materials. The question is: why is it that, despite that, we have seen – in local authority area after local authority area – materials being put up that appear not to comply with those building regulations?

And then the trap closed. Because the answer is austerity.

I think I can help the Prime Minister with this issue. When you cut local authority expenditure by 40%, you end up with fewer building control inspectors.

At this point, the Conservative Party attempted to shout the Labour leader down, unwilling to hear the impact of their own cuts to local government spending. When Corbyn returned to the despatch box, he said:

What the tragedy of Grenfell Tower has exposed is the disastrous effect of austerity… This disregard for working-class communities, the terrible consequences of deregulation and cutting corners. I urge the Prime Minister to come up with the resources needed to test and remove cladding, retrofit sprinklers, properly fund the fire service and the police, so that all our communities can truly feel safe in their own homes.

“When you cut local authority budgets by 40%, we all pay a price in public safety” @JeremyCorbyn at #PMQspic.twitter.com/4AjqJbu1Xm

And that bottom line is inescapable. The people in Grenfell Tower died because their lives were not worth protecting to those whose job it was to do so. It’s a failure which cannot, and must not, be repeated.