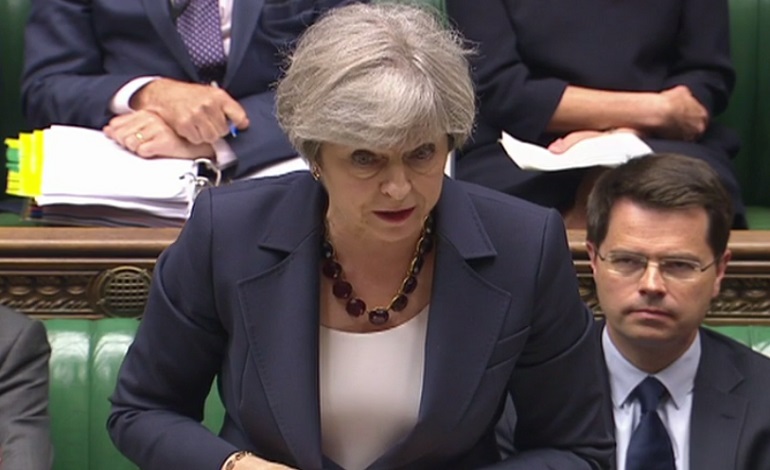 Theresa May has resorted to lying in parliament. Seemingly to try and distract from her own party’s failings over the Grenfell Tower fire. The PM attempted to pin some of the blame for the disaster on Labour, when it was actually Conservative governments as far back as Margaret Thatcher’s which were responsible.

During Prime Minister’s Questions (PMQs) on Wednesday 28 June, Labour leader Jeremy Corbyn levelled [47.40] at May the accusation that Grenfell was an example of  a “disregard for working-class communities”. He went on to say that it also showed the “terrible consequences of deregulation and cutting corners” and “austerity”. He then said [47.40] that the government must:

come up with the resources needed to test and remove cladding, retrofit sprinklers, properly fund the fire service and the police so all our communities can truly feel safe in their own homes.

But Corbyn’s words clearly unnerved the PM, as she went on to tell several outright lies about who was ultimately responsible for the regulation surrounding cladding on tower blocks, saying:

The cladding of tower blocks began under the Blair government.

May said the cladding of tower blocks began under Tony Blair’s government. But this is not true. It actually began under Thatcher’s, as the first few minutes of a documentary from 1984 show:

Also, in 1986, Thatcher’s government changed building regulations surrounding materials used on the outside of buildings. And these alterations meant that anything used did not have to be non-combustible. This meant flammable materials could legally be used to clad tower blocks.

The PM said that, in 2005, Labour changed regulations for inspecting buildings for fire safety. This duty was taken away from the fire brigade and given to a “responsible person”. The Regulatory Reform (Fire Safety) Order 2005 [pdf] did indeed change fire inspection and safety duties to a “responsible person”. But this was not fully applicable to domestic premises such as Grenfell Tower, as the legislation clearly states [pdf p8]. And where it was changed, the “responsible person” became the local authority. A body which most would argue should be responsible for safety in its buildings anyway.

May said that the report into the 2009 Lakanal Tower fire in Camberwell had criticised the 2005 order. This is not true. In fact, the 2013 Coroner’s Report which May refers to criticises [pdf p2] the then Communities Secretary Eric Pickles and the coalition government for not dealing with “uncertainty about the scope of inspection for fire risk assessment purposes which should be undertaken in high rise residential buildings”. It said the government needed to provide “clear guidance” on this; something which didn’t happen and which the Fire Sector Federation said in 2015 was still “long overdue an overhaul”.

May used these lies to make the point that the build-up to the Grenfell Tower fire was a “matter that occurred under governments of both colours” as well as “councils of all political persuasions”. This was an apparent attempt to not only depoliticise Grenfell Tower, but to deflect some of the blame from the Tories. But the reality is that successive Conservative governments have repeatedly ignored warnings that fire regulations needed updating. And they have failed to act on advice from parliamentary groups and industry professionals.

The bigger picture here, however, may well point to failings by all those in the political establishment. Because the Grenfell Tower tragedy is not merely one of inadequate regulations, loose accountability by governments and local authorities, and poor standards of social housing. It is also a microcosm of the utter contempt and disregard that the political class have held for the poorest and most vulnerable people in British society for tens (if not hundreds) of years. And no amount of reports, legislation, or inquiries can change that.