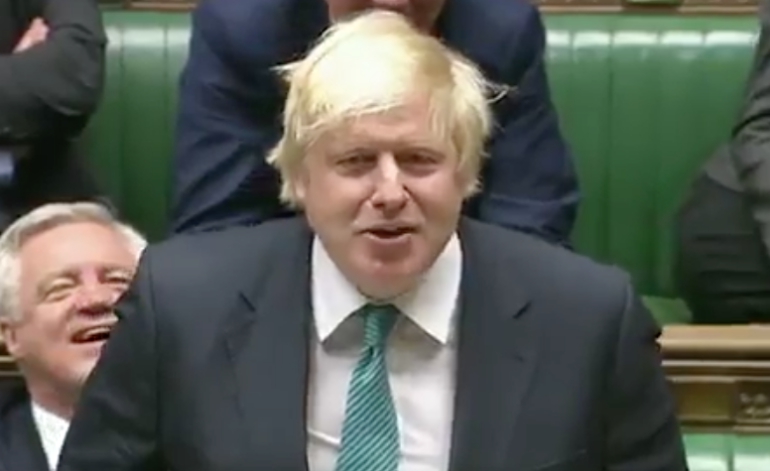 On Saturday 24 June, Jeremy Corbyn gave an inspirational speech to a huge crowd at the Glastonbury festival. But Foreign Secretary Boris Johnson responded in parliament to the speech in the most ridiculous and patronising way possible. He even suggested that the assembled festival-goers were part of a brainwashed cult.

This shows yet again why the Tories are so out of touch with large swathes of the electorate.

Johnson began his patronising rant by deliberately mispronouncing Glastonbury as “Glarstonbury”. Although he claims this is how he has always pronounced the name, it appeared that this was probably done for effect given he had to correct himself at one point when he accidentally said it in the same way that 99.9% of the population does.

But if this wasn’t enough, Johnson then went on to patronise Corbyn supporters and essentially accuse them of being part of a cult:

When they saw those extraordinary scenes on the stage at Glastonbury, there were friends and admirers of this country around the world who were genuinely, genuinely alarmed that – at a time of such uncertainty – the leader of the main opposition party… should have exercised such an Orphic spell… on those who had previously been his opponents that they have meekly acceded to his desire…

Johnson seems to believe that Corbyn has his supporters under a “spell”; that they are entranced by a mystic charm. In plainer language, he clearly seems to think of them as a brainwashed cult who are “meekly” giving in to Corbyn’s will.

But then, this is probably a much more comfortable view for Johnson than admitting he is part of an elitist, out-of-touch party that is being massively rejected by vast swathes of the population.

Johnson is known for being a serial liar. And this speech was no exception. He claimed that Corbyn was going:

not just to run down our defences but as he said on the stage of Glastonbury… that he would scrap our nuclear defence.

But Corbyn said nothing of the sort. Johnson was referring to an off-the-record conversation Corbyn had with Glastonbury founder Michael Eavis. Eavis claimed Corbyn wished to get rid of Trident ‘as soon as possible’.

And there was nothing extraordinary or contradictory about the statement Corbyn reportedly made to Eavis. Corbyn has never made any secret of the fact that he would like to scrap Trident. He has also made it clear that he respects the democracy of the Labour Party and its current position.

Johnson, like several other Conservative MPs, is clearly confused over the current political landscape. Other MPs are choosing to blame the BBC for having the audacity to show the speech. Johnson, on the other hand, has chosen to patronise Corbyn’s supporters and misleading people about what he said.

Instead of looking for scapegoats or blaming the electorate for Corbyn’s popularity, Conservative MPs would be better off looking at why their party and leader are hated so much across the country.

Things are changing. There is a shift in political engagement. And people are rejecting the politics of austerity for a more compassionate politics that looks after the interests of all of us. Johnson is part of an old elite who are losing control. Johnson’s demeaning rant will only speed up this process.

– Join the Million March in London on 1 July.