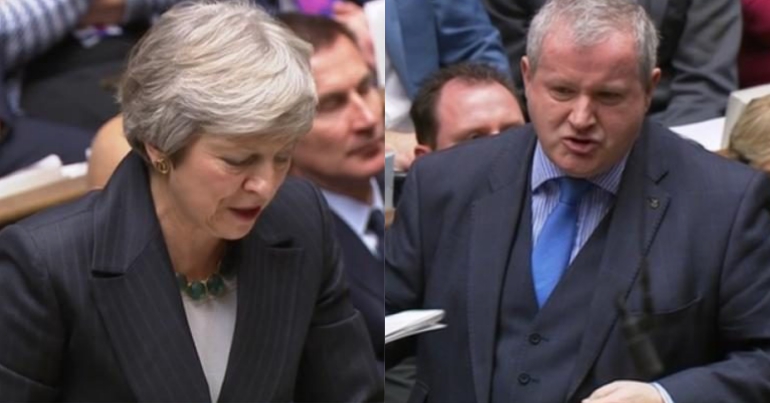 “Dead in the water”

Amidst the chaos of the House of Commons on 15 November, Blackford decried the PM’s attitude to the devolved administrations of the UK. He confirmed the SNP would vote against the Brexit deal, saying it was “dead in the water”:

SNP leader Nicola Sturgeon was also very critical of the PM’s Brexit proposal, saying it “disregards” Scotland’s interests. Sturgeon called for Scotland to be given special status similar to Northern Ireland, claiming the current plans put the country at a “competitive disadvantage”:

Not long off call with PM. She tried to tell me Scotland’s ‘distinctive’ interests had been protected. I pointed out that there isn’t a single mention of Scotland in the agreement, that it disregards our interests, and puts Scotland at a serious competitive disadvantage.

The SNP Westminster leader went on to point out that Northern Ireland is mentioned in the document 100 times but there is not a single mention of Scotland. He also claimed that “utter contempt has once again been shown to the Scottish government, its parliament, and its people”.

Theresa May then made a faux pas that will not please her so-called allies in the DUP. The PM stated that Scotland is part of the UK and that was the reason there was no mention of it in the document. Does the PM know something about Northern Ireland we don’t?

“Brutal” from the SNP

This is brutal from Blackford. When slating PM Tories just sitting in silence.

Since the speech, there has been a barrage of posts on social media calling for Scotland to jump ship:

And the man himself couldn’t resist an extra cheeky dig:

Well we can fix that for her! https://t.co/bZXqfr8dud

While focus rightly remains on the situation in Northern Ireland, something is bubbling north of the border. It’s looking ever more likely that referendum season isn’t quite over yet.