Our time is up. We've got nothing left but rebellion. - Canary 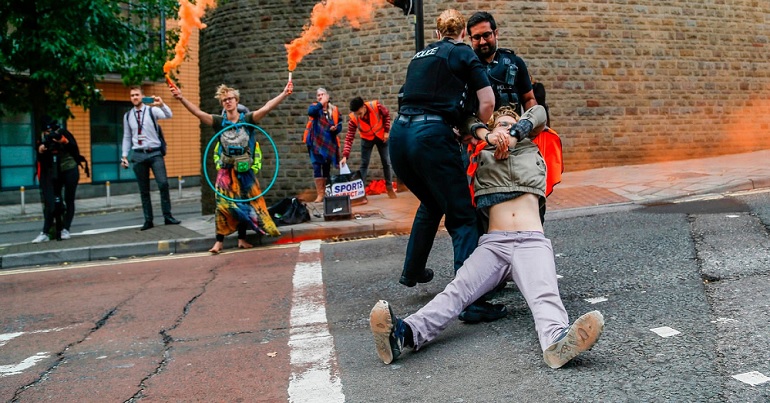 On 31 October, a group of people will gather outside parliament. Their aim? To tell the government that either it takes drastic action over climate and ecological breakdown, or they will. And looking at the catastrophe the planet faces, and the reasons why we got here – I think the rebellion they advocate may be our only option left.

Extinction: knocking at our door

As I previously reported, the group Extinction Rebellion is making moves. It believes that government, charities, and campaign groups aren’t doing enough to avert climate and ecological breakdown. It thinks that things are so bad, mass extinction may be just around the corner. So it’s telling the government to act. But it’s going further; planning mass acts of civil disobedience to show how serious this is. You can read all about what’s going on here.

Extinction Rebellion is doing this because it thinks time is running out. As The Canary has documented, the climate and ecological breakdown we face takes many forms. From fracking to the food industry; plastic pollution and Heathrow’s third runway; to the sixth mass extinction event that’s already wiped out 80% of some species’ populations. We’re on a collision course with disaster.

Recently, the Intergovernmental Panel on Climate Change (IPCC) released a report on the climate breakdown. As the IPCC warned, we could cross the threshold into climate catastrophe as soon as 2030. And it noted that trillions of dollars in investment is needed to stop this. Meanwhile, on 30 October, the WWF said humans have wiped out 60% of other species’ populations since 1970.

Our planet is in chaos. This is why something like Extinction Rebellion is needed.

What the group offers isn’t perfect. But the principle behind it is the nearest damn thing we currently have to what’s needed in my opinion. Because those in power will not change by themselves. Or, if they do, it will not be for the benefit of the rest of us. People like Jeremy Corbyn are not going far enough. Or, if they are, its within the constraints of the system; a system that will not give up its power easily. All this is underscored by the fact that we’ve nearly run out of time. The climate and ecological chaos we face is our central challenge. But also, the march of corrupt capitalism to a truly dystopian world is still relentless. Right now, we’re on a rapid path to self-destruction.

Too often, media and political conversations are bogged down in issues that seem important – but in the grand scheme of things they’re not. By default, these drive what the rest of us discuss; whether that’s Brexit, PMQs, cuts to services – whatever.

Of course, these issues are important in the here and now; at the sharp end, people are dying. But what happens if, in 50 years’ time, there is no ‘here and now’? Faced with mass extinction and planetary-level chaos, worrying about who can fish where after the UK leaves the EU seems like a nonsense. There could be no fish left; let alone people to fish for them.

And this is the point. Because many in the media and political class would quite happily have us all ‘sweating the small stuff’; distracted while the planet and society burns from the inside out. They’d prefer it if we didn’t realise that the ‘small stuff’ is all part of the same issue. From welfare, to the NHS, via homelessness and Brexit. It’s all the same thing: that for too long humans have been governed by people only interested in serving themselves.

A problem thousands of years in the making

For around 5,000 years we’ve had a problem as a species. We have lived in hierarchies for most of that time. A few people at the top have control over what the rest of us do.

And, if we’re honest with ourselves, we know this has never really worked. Because if it had, why has there generally always been poor people at the bottom? Why has there commonly been some human lives that are worth more than others?

We consider ourselves the most advanced life form on the planet; possibly the universe. Yet throughout our history, the majority of us have willingly accepted a minority telling us what to do. When has it benefited us? And why, in 2018, is society no more truly equal than it was thousands of years ago? Even with all our academic, scientific, and technological advances?

Today, we may be led to believe that just because we own a car, rent a house, and buy the same shopping each week that we’re ‘more equal’ to Richard Branson than Egyptian slaves were to their Pharaoh. Looks can be deceptive. Because it’s all relative. Many of us may not be physical slaves – but only the Richard Bransons truly have freedom in 21st century society.

But moreover, why do we still put up with these damaging hierarchies?

It’s called greed and power. The first is a human desire; forged over thousands of years by hierarchies. One that tells us having more stuff makes us better than our neighbour. The second is almost a drug, that corrupts many people who have it. Those at the top push both as being in reach of those at the bottom. Together, they’re what drive benefit cuts; make people homeless; allow fracking and destroy the NHS. But now, this greed and power from the ‘one percent’ has literally put every species and the planet at risk. And we continue to be complicit in it; consciously or not.

This has to end.

Tinkering around the edges is no longer enough. We, as a planet, have problems so deeply rooted that tinkering will no longer do. Politics isn’t the answer, unless people can guarantee that a Corbyn-led Labour government will be in power well past our lifetime. And that its ideology will spread across the globe; changing our cultural, economic, industrial, and societal structures. Then, in turn, that the greed-driven, power hungry ideology of the ‘one percent’ will never darken our door again.

Or, if people support the Green Party, that the colonisation of the ‘Green Revolution’ will end; the co-opting that sees monolithic corporations like Shell suddenly take an interest in renewables. While it’s still avoiding tax and investing with money that comes directly from fossil fuels. People also need to guarantee the public will elect the Greens, naturally.

There also needs to be a guarantee this will happen in the next 12 years, if we’re to heed the latest climate catastrophe warnings.

But no one can guarantee any of this, can they?

History says a Corbyn-led government would be in power for 15 years, tops. Then we’ll repeat the same process all over again, but ending up further backwards before. Modern history shows us this. We flip-flop between left and right wing governments. And with every change, things like the NHS, welfare, and education are never as good as they were previously. Truly hamsters in a wheel; with the wheel getting larger and larger as time goes on.

To put it bluntly: we’re fucked. And the only way it will change is by all of us taking drastic action now. We can’t leave it to politicians and corporations to decide. Unless someone can name one point in history when leaving power in the hands of a few has been good for the many? As in every single lifeform on this planet? And when it actually lasted.

Enough is enough. It really is time to rebel. Before extinction snatches the opportunity away from us.

– Find out more and show your interest in the Declaration of Rebellion day on 31 October.