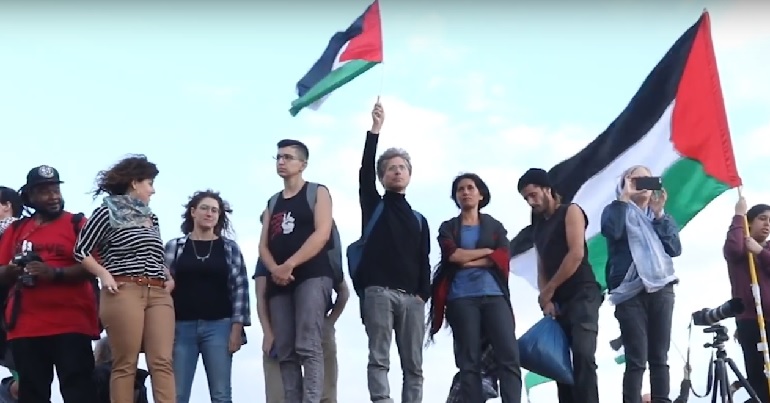 On 26 October, a group of 50 Israelis took a stand against apartheid in an act of solidarity with Palestinians living in the open-air prison of Gaza. And although they had to stand on different sides of Israel’s apartheid wall, their message was powerful and beautiful.

‘Equal rights is the only path to peace’

The activist group told The Canary that the organisers of Gaza’s Great Return March protests had invited them to attend. And prominent Boycott, Divestment, Sanctions (BDS) campaigner Dr Haidar Eid (also founder of the Gaza section of the One Democratic State Group (ODSG)), spoke to the group over the phone.

The Israeli activists told The Canary:

Living under the Israeli Apartheid system, we as Jews are granted rights that Palestinians are denied. For example, we can demonstrate without being shot in the head or maimed by an Israeli soldier…

We recognize that equal rights for people regardless of their ethnicity, including of course the right of the refugees to return, is the only way for all people in this land – Jews and Palestinians – to live in peace and prosperity.

‘We, together, can bring this apartheid system to an end’

You are about three to four hundred metres from the fence from where we are standing, but we can not talk to you; we can not shake hands with you… This is apartheid.

We, together, with our joint struggle… [1:45] can bring this apartheid system to an end.

This event was not a one-off, though.

The activists belong to the group ‘Return’, and describe themselves as:

anti-Zionist Israelis working in solidarity with Palestinians in support of the Great March of Return.

Their principles, meanwhile, are:

Photographer Haim Schwarczenberg has been documenting Return’s actions. And a few weeks earlier, the group participated in another event with Palestinian activists in Gaza:

Return’s actions highlight that there are many Jewish people who oppose or criticise Zionism. As left-wing Jewish group Jewdas has insisted:

Zionism is the belief that there should be a Jewish state in Israel. Many Jews are not Zionists, and political Zionism is a comparatively new movement within Jewish thought (150~ years old). To equate Judaism with Zionism is misleading – Jews do not have a responsibility nor a natural tendency to be Zionists.

It has also stressed:

Alongside alleged Israeli war crimes and ethnic cleansing in the occupied West Bank, people in Gaza continue to live in what many observers describe as an open-air prison. It’s a place where water pollution is a “leading cause of child mortality”. In May, meanwhile, the UN said Gaza was facing “an unprecedented humanitarian crisis, caused by over 10 years of Israeli blockade“. This statement came just as Israel was murdering Gazan protesters – and just under four years on from its massacre of around 1,483 civilians in the territory.

As the Return activists have shown, Israelis are also saying enough is enough.

– Also join B’Tselem’s campaign against the forcible transfer of civilians in the Occupied Palestinian Territories, and support the Boycott, Divestment, Sanctions (BDS) movement.

– In the UK, meanwhile, you can write to your national or local politicians to ask them to push for peace talks between Israel and Palestine.

– You can also add a video to the #MeTooGaza campaign.