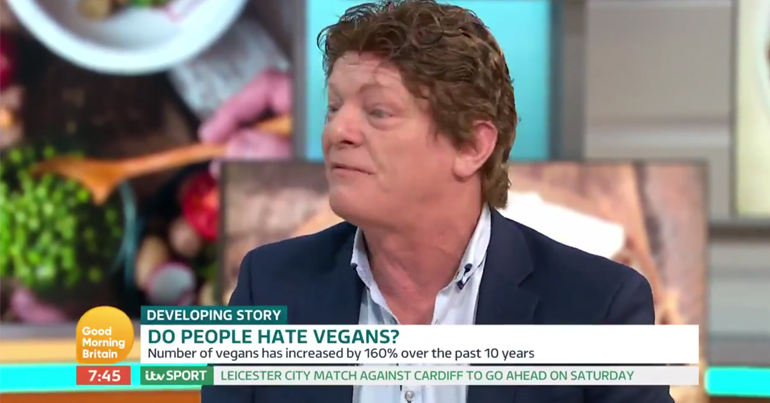 Waitrose Food magazine editor William Sitwell made headlines after he proposed an article series on “killing vegans”. Good Morning Britain then hosted a ‘debate’ on the question: “Do people hate vegans?”. There’s no way that could go wrong… is there?

“Killing vegans, one by one”

How about a series on killing vegans, one by one. Ways to trap them? How to interrogate them properly? Expose their hypocrisy? Force-feed them meat? Make them eat steak and drink red wine?

Following the article on @BuzzFeed – and in the interests of transparency – here's my original pitch to the editor of Waitrose, along with my response to his reply. No "triggered vegans" here, thanks! 🙂 #Vegan #Waitrose pic.twitter.com/bjRon1N0bb

After his comments hit headlines, Sitwell quickly backtracked and later quit. And Waitrose said the editor’s comments “absolutely do not represent our views”.

Good Morning Britain, however, decided the issue was too good to pass up.

You can’t invite them out. You can’t go anywhere with them.

And when challenged by fellow guest Adrian Chiles as to whether he knows any vegans, Boylan said:

I know loads of them. They’re strange people.

The Editor of Waitrose Food magazine caused outrage after he controversially joked about ‘killing vegans’. pic.twitter.com/ctHPF8fC5q

Boylan is known as a “controversial” figure so his comments shouldn’t come as a surprise. But social media wasn’t going to let Good Morning Britain‘s airing of such views go.

Many pointed out that veganism is good for animals, humans and the planet:

How about the fact the UN has said animal agriculture is killing our planet? So vegans are to stand back and watch uneducated people destroy our only home? Look up the UNs website and also WWF who have said animal ag is wiping the planet of all other life! Have a nice day!!!

How sad that Suzannah has turned into Piers. @GMB please do some research beforehand and let your guests get a word in edge ways. Turning #vegan is the single biggest way to help the environment. https://t.co/edI9fFd4Fp

Let's hate vegans because they passionately call for the unnecessary use of animals.

So by arguing against veganism, and the activism you are promoting animal use and cruelty. Humane meat is an oxymoron.

Others exposed the irony in the ‘vegans push their diets on others’ trope:

I’d like to remind people of the uproar at the vegan week in bake off. People complaining it’s not real food, literally saying ‘mmmm steak’, actually going out their way to message vegans hate…. but once again, vegans are the pushy ones c

How do you know if you're in a room with a vegan? Don't worry, everyone else will start mentioning it and making vegan jokes even when we don't actually mention it ourselves

Not just a choice

Dissenting voices weren’t the only ones seen on social media though. Plenty of people were happy to join the attack, with many saying freedom of choice is what matters:

Has a friend turned vegan, constantly radically preached to others how they need to convert to vegan, she lost many friends including myself for continually preaching vegan, was her choice, I chose mine, its called freedom, no need for them to preach, Choice!!!

I personally don't care if you're vegan or not. The only thing that makes me hate vegans is when they call non vegans heartless and all that because we eat animals. It's your choice if you want to be a vegan and that's acceptable but please don't ruin it for the non vegans.

But recent news shows that such choices bring bigger problems than feeling ‘preached to’.

On 8 October, the UN warned the world has just 12 years to begin serious action against climate change. Just two days later, a major study by the University of Oxford said animal agriculture plays a critical role in climate change.

Wildlife charity WWF warned on 30 October that human activity has wiped out 60% of animal species in less than 50 years. This has led to unprecedented threats to global biodiversity. Speaking to the Guardian, WWF science and conservation director Mike Barrett said, “Eating less meat is an essential part of reversing losses”.

Attitudes towards veganism are changing, and they’re changing fast. It’s not the first time Good Morning Britain has platformed anti-vegan rhetoric. The problem isn’t just that it’s tired, it’s also dangerous. Veganism isn’t just essential for other animals, it’s crucial to the future of humanity and the planet too.

– Check out the Vegan Society’s how-to guide on starting to become vegan.

– Listen to the Vegan Vanguard podcast, “Why Leftists Should Be Vegan”.

– There are genuine criticisms of veganism, but they’re not the ones peddled on Good Morning Britain. For example, try the discussion around veganism and capitalism as introduced by Chickpeas & Change.

– Read more from The Canary about veganism.