The government just got a short, sharp warning about our planet's emergency - Canary 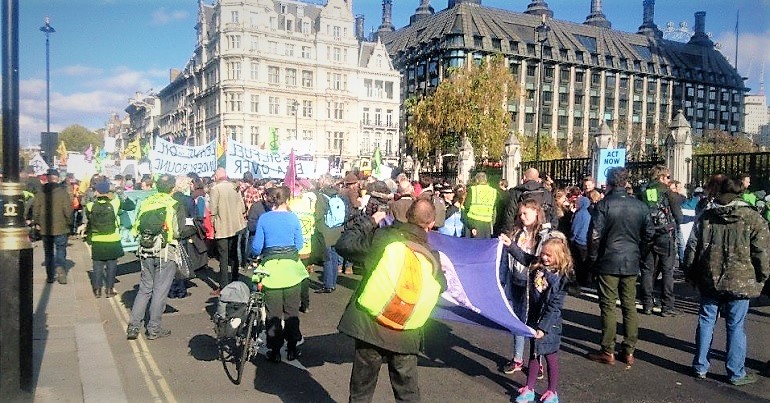 Hundreds of people just put the government on notice over the biggest threats the planet faces. And they did so right at parliament’s front door.

The Extinction Rebellion campaign is under the banner of the RisingUp activist network. It aims to get people across the country to take part in non-violent but disruptive acts of civil disobedience. These will highlight the climate and ecological catastrophe we’re all facing; but also the inaction of politicians and “elites”. You can read The Canary‘s full report on Extinction Rebellion here.

Its campaign officially began on Wednesday 31 October. At 10am outside parliament, hundreds of people gathered to launch Extinction Rebellion’s “Declaration of Rebellion” to the government. Its key demands are that the government:

.@gailbradbrook, 'People are dying now… I refuse to do nothing.' #ExtinctionRebellion pic.twitter.com/EQ9jPQXRiy

Extinction Rebellion then held a “ceremony of remembrance” for those of us, and other species, who have died or will do:

We are now mourning all of the lost species. Let's all stand together as conscientious protectors against the corrupt climate breaking UK government. We are the #ExtinctionRebellion. pic.twitter.com/fCPuBHssuY

.@GeorgeMonbiot, This is our darkest hour… We are in the 6th mass extinction… The breakdown of our climate has started.' It is our right and duty to rebel for life with the #ExtinctionRebellion. We declare the rebellion against the criminal UK government. pic.twitter.com/V6UV0m1pUw

As did TV presenter Julia Bradbury:

.@JuliaBradbury, 'Countries have an obligation to protect their citizens.' #ExtinctionRebellion for #ZeroCarbon2025. pic.twitter.com/wzJ5fGHVbc

.@labourlewis just after their speech. We must transform how we live for people and planet. #ExtinctionRebellion pic.twitter.com/lTLHURJRW9

.@MollyMEP calls for peaceful civil disobedience because it has worked before and can work again. #ExtinctionRebellion. pic.twitter.com/VYP5DQvh0B

Greta Thunberg is a 15-year-old Swedish girl. She’s breaking the law through her “School Strike for the Climate”. This sees her seated outside the Swedish parliament refusing to go to school. Thunberg spoke before the Declaration:

A little video from @GretaThunberg before we get started today… #ExtinctionRebellion pic.twitter.com/XtgPItuXyj

Extinction Rebellion then issued the formal “Declaration of Rebellion”: 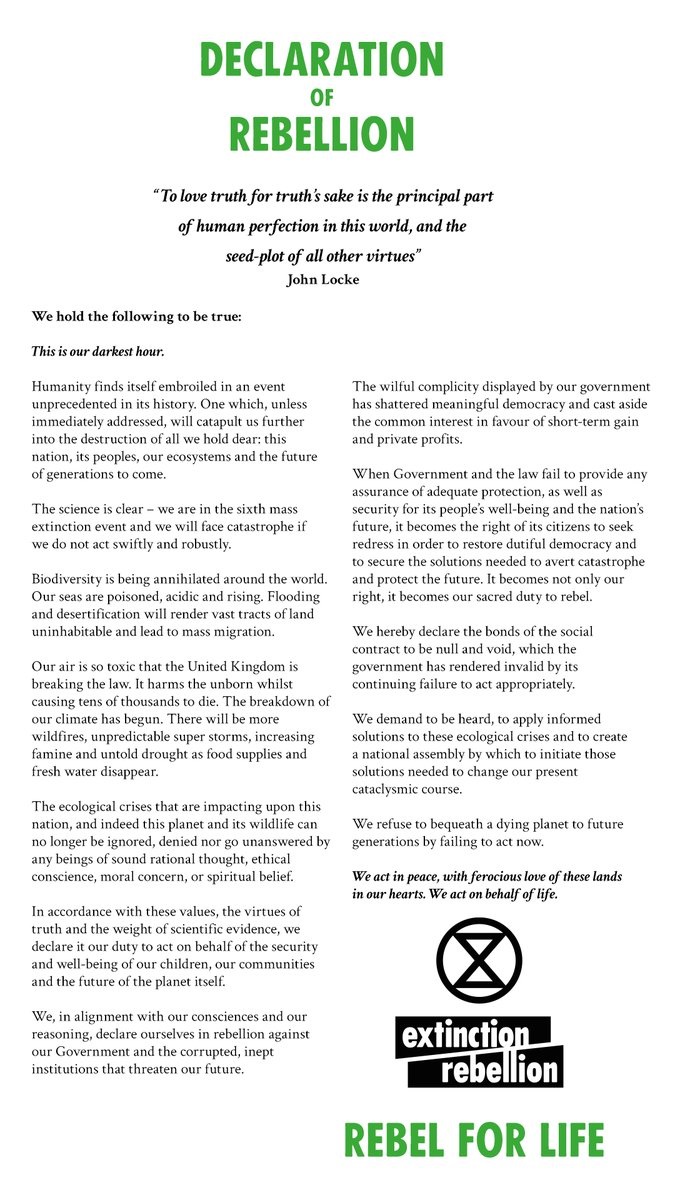 As a mark of the civil disobedience to come, people then blocked the road outside parliament: 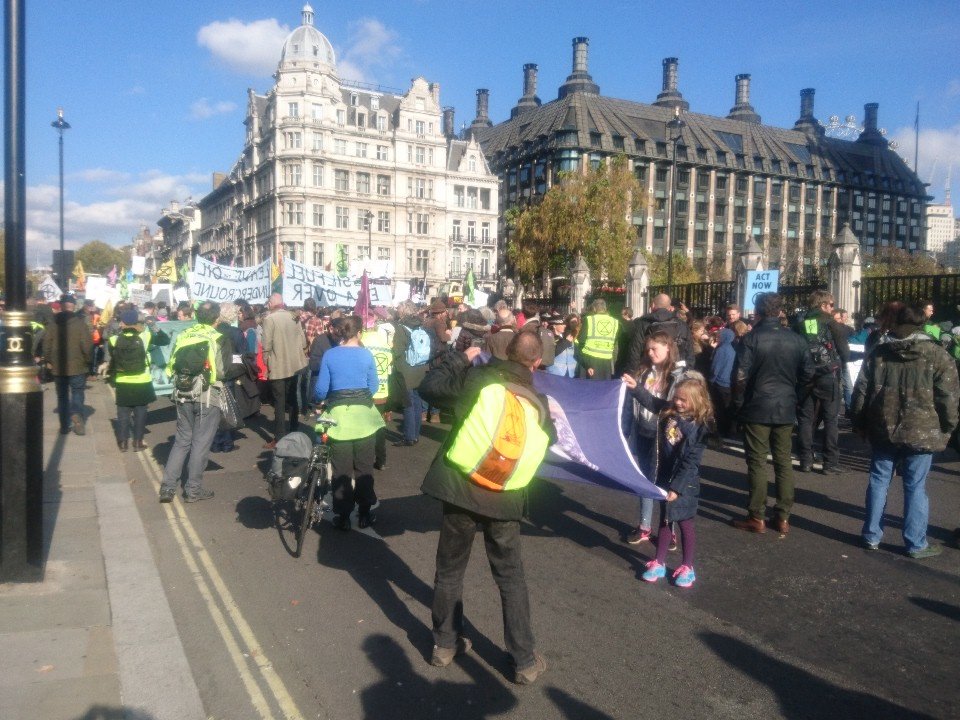 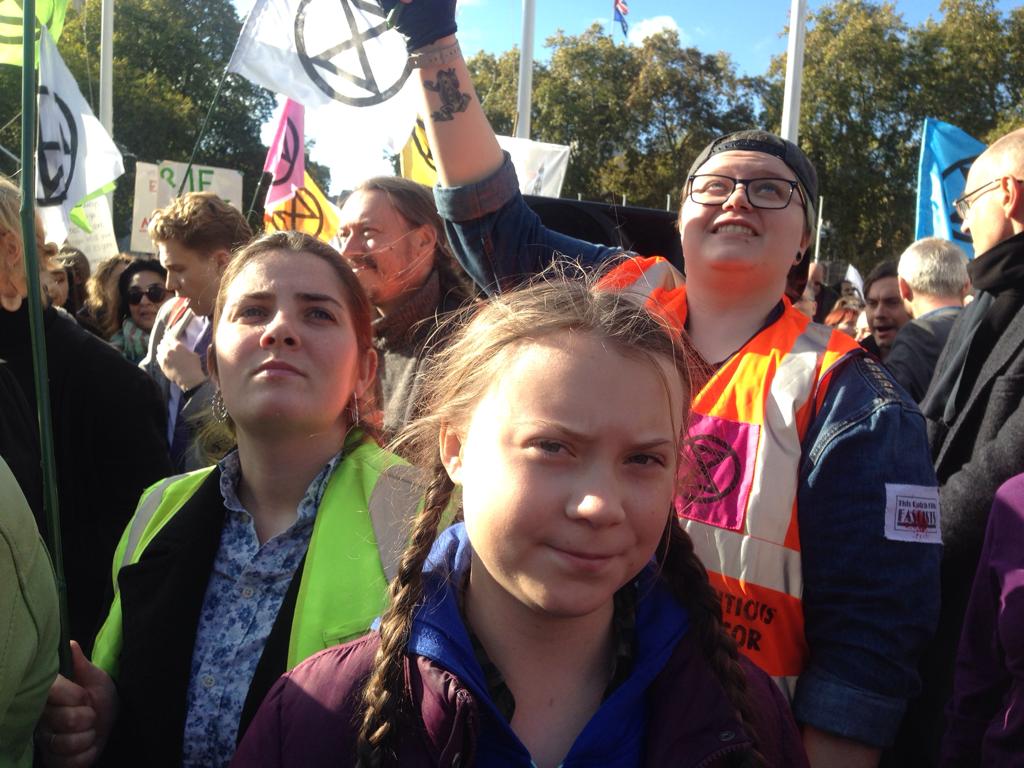 So we stop the traffic at Westminster. Climate change rally with #ExtinctionRebellion . pic.twitter.com/bKoAN36idn

The #ExtinctionRebellion is going well! Sitting in the road in Parliament Square @ExtinctionR Joine by my colleagues from @Ashden_org pic.twitter.com/6A37dWxQ4L

People also locked on in the road:

People locking on at the #ExtinctionRebellion pic.twitter.com/1Jc31sZPr4

And as Capital London News tweeted:

Roads around Parliament Square are closed due to a large protest organised by @ExtinctionR. It's thought 1,000 people are there #CapitalReports pic.twitter.com/9uMhMYIlXW

As @CarolineLucas spoke to us about how they would not let her talk about climate breakdown in Parliament after the budget the police tried to get the #ExtinctionRebellion to leave Parliament Square. pic.twitter.com/363KHfiXHV

The police should be protecting people and planet. This is a climate emergency. #ExtinctionRebellion pic.twitter.com/rKPtW9daZh

But the day was just the start of Extinction Rebellion’s action. And there’s good reason for it taking this approach.

As The Canary has documented, the climate and ecological breakdown we face takes many forms. From fracking to the food industry; plastic pollution and Heathrow’s third runway; to the sixth mass extinction event that’s wiped out billions of animal populations in little more than a century. We’re on a collision course with disaster.

Recently, the Intergovernmental Panel on Climate Change (IPCC) released a report on the climate breakdown. As the IPCC warned, we could cross the threshold into climate catastrophe as soon as 2030. And it noted that trillions of dollars in investment is needed to stop this. Meanwhile, on 30 October, the WWF said humans have wiped out 60% of other species’ populations since 1970.

It’s this chaos that Extinction Rebellion is, in part, addressing. But it goes further, believing that if left alone, governments, corporations, and charities will not do enough. So, a mass movement of people needs to mobilise in order to either make these groups take notice – or change things themselves. On 12 November, nonviolent civil disobedience will commence; leading to “Rebellion Day” on 17 November. This will be coordinated by Extinction Rebellion. Details will be released in due course.

As Extinction Rebellion told The Canary:

Time has almost entirely run out to address the ecological crisis which is upon us, including the 6th mass species extinction and abrupt, runaway climate change. Societal collapse and mass death are seen as inevitable by scientists and other credible voices, with human extinction also a possibility, if rapid action is not taken.

Extinction Rebellion believes it is a citizen’s duty to rebel using peaceful civil disobedience when faced with criminal inactivity by its Government. The Rebellion centres on demands for Government to tell the truth about our dire situation and to act accordingly, including to decarbonise our economy by 2025, in a mobilisation of war time like proportion. A Citizens Assembly will oversee the transition to a world which would be far more beautiful, less frenetic and with meaningful work for all.

Some people may not agree with Extinction Rebellion’s ideas. Nor may they not take its position on climate and ecological catastrophe. People may question its motives. And others may raise concerns about law-breaking. But we can all surely agree that the crisis we, as a species and planet faces, is huge. And that it’s now becoming clearer than ever that politicians and corporations do not have the answers. So, maybe it’s time to find the inner rebel inside of you. Because if we’re not careful, we may actually have no time left.