Everyone’s shocked at Brazil’s new president. Except the BBC, which suggests he’s a ‘refreshing break’ - Canary 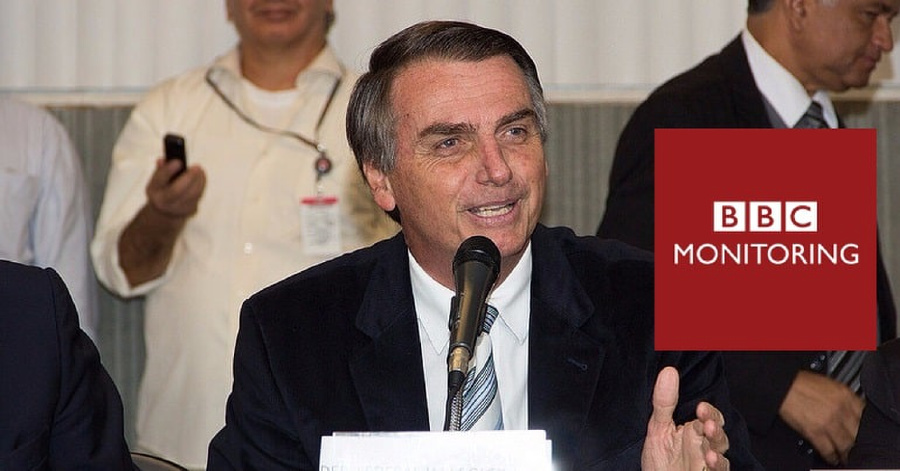 Many people are shocked at Brazil’s new president-elect. Jair Bolsonaro is openly homophobic, pro-torture, and racist; has advocated abolishing democracy; and may well destroy the Amazon rainforest.

“A refreshing break from political correctness”

Nonetheless, the BBC suggested Bolsonaro could be a “refreshing break”:

They've deleted this tweet because of the uproar it provoked but, once again for those at the back, the mainstream media will continue to mainstream and legitimise fascism. pic.twitter.com/9uhUtOFP6c

In September 2018, the president-elect said of his mainstream political opponents:

Bolsonaro also uses dangerous rhetoric towards minorities. He said in 2017 that Afro-Brazilian communities are “not even good for procreation”, calls torture a “legitimate practice”, indigenous people “parasites” and is “proud to be homophobic”. Bolsonaro also implied there could be a military coup if he didn’t get his way through Brazil’s electoral system.

Yet the BBC questions whether such views could be a “refreshing break from political correctness”. Later, the public broadcaster claimed only that the “language” of the tweet was wrong:

We have removed an earlier tweet about statements made by Brazilian Jair Bolsonaro. The intention was to reflect the spectrum of opinion on such statements but the language of the post may not have reflected this accurately.

On social media, people were shocked:

So nice for women, LGBT people and minorities to know that the BBC thinks it's a toss-up whether persecuting them is bad or "refreshing."

“A real issue with the far-right”

Others pointed to the BBC’s record of appeasing the far-right:

do you see why people have a problem with how the BBC is reporting things these days? are you finally starting to see what we see? ie. the BBC sympathising with & needlessly giving a platform to the far-right? do you see how that could be perceived as biased?

From portraying Yaxley-Lennon as a victim to asking if Bolsonaro is ‘refreshing’, the BBC has a real issue with the far right. This needs to be faced up to. It’s not just the social media interns at @BBCMonitoring, but the heart of @BBCNewsnight and beyond.

As Paul Bernal points out, the BBC’s coverage has been sympathetic to EDL founder Stephen Yaxley-Lennon (aka Tommy Robinson). BBC Newsnight has also used imagery to reinforce the perception he’s a silenced free speech advocate:

TONIGHT: Is Tommy Robinson a man raising concerns that others ignore, or a far-right figure exploiting the victims of sexual abuse for his own ends? We look into the roots of his appeal – and where his movement is headed next.

By contrast, inside accounts of Yaxley-Lennon’s campaign suggest he stokes anti-Muslim prejudice simply for money and power. Lucy Brown, who was Yaxley-Lennon’s assistant until May 2018, has said:

This is a business and your outrage, valid as it is, will be monetised as such.

Yaxley-Lennon and his family now have a £500,000 house and go on regular holidays.

Then there’s the BBC platforming and sympathising with far-right strategist Steve Bannon. In an email to Scottish first minister Nicola Sturgeon, the BBC described Bannon as a “powerful and influential figure…promoting an anti-elite movement”. Bannon, former chairperson of Breitbart News, stands accused of promoting and participating in racism. For example, Bannon’s ex-wife issued a sworn statement in 2007 accusing Bannon of antisemitic remarks.

The BBC also supported Brazil’s elite and helped amplify attacks on the Worker’s Party before.

With the ongoing collapse of free-market economics, the far-right is on the rise globally. If the mainstream media continues promoting those scapegoating minority communities, while sidelining or smearing progressives with genuine solutions, we are reaching a dangerous turning point.