Austerity rebrands itself for a new publicity drive - Canary 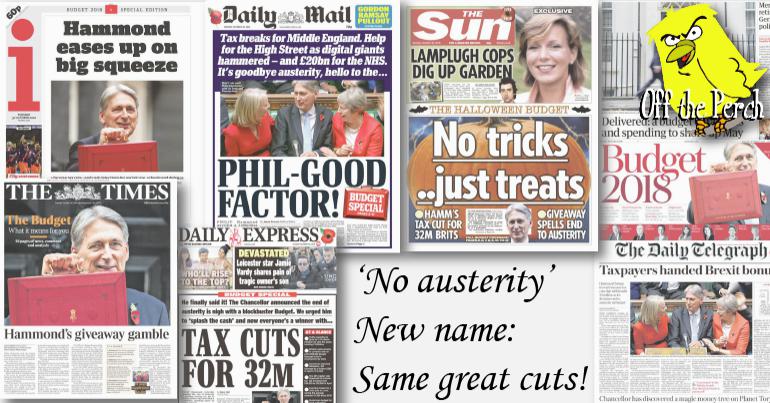 The government realised people are sick to the back teeth of austerity. But are they? Maybe people are just sick of hearing the word ‘austerity’? Maybe – with a little bit of creative advertising – the government can carry on pushing the same cuts with no downside?

But is the media stupid or corrupt enough to fall for such an obvious ploy? Especially after falling for it every Autumn for the past few years?

There's no real impetus for the Tories to ever end austerity because they can just say they're ending it and get this much free press.

These same papers have reported austerity finishing for years. Fool me once, shame on you. Fool me forever, print media's dying. pic.twitter.com/Zg561o8PlG

After assessing the situation, they decided they could go bigger.

So the Tories said austerity is coming to an end. But reality – as in the actual figures – shows it isn’t. They’re still cutting shit. And what little extra they’ve given is a plaster on the gaping wound they’ve inflicted, or – YOU GUESSED IT – a tax cut for the fucking rich.

And this is the rebrand we got.

‘Austerity’ is now ‘no austerity’.

‘Journalism’ is ‘reprinting government propaganda but throwing in some puns and a photoshop for good measure’.