Chaos at the Autumn Budget. Bet the Tories won't want this broadcasting. - Canary 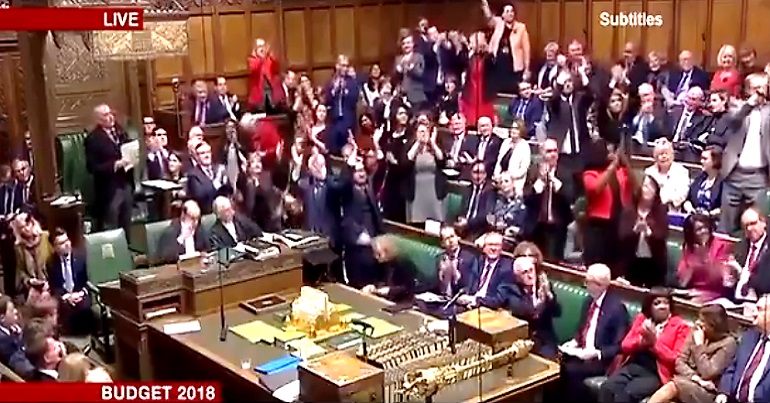 There were some chaotic scenes during the Autumn Budget that you may have missed. But even if you didn’t, the Tories would probably prefer they weren’t broadcast.

Chancellor Philip Hammond didn’t mention the issue of women’s pensions during his budget. But unfortunately for him, some of the women affected were in parliament’s public gallery. And they certainly made themselves known:

Tories silent after Hammond's #Budget2018 speech while Labour MPs applaud 1950s #WASPI women protesting in the public gallery at the theft of their pensions. pic.twitter.com/ZTfXftin2v

The 1950's women were waiting patiently for a mention in #Budget2018 but there was nothing, until @jeremycorbyn stood to his feet and spoke.

It is a shame @WASPI_Campaign were thrown out before they got to hear @UKLabour response.

We gave you a standing ovation. pic.twitter.com/UYiqrmRmAN

Other MPs tweeted their support:

All power to you #WASPI women. Nothing from this impotent Budget from this limping government. Demonstrating in the public gallery at the conclusion of the #Budget2018 pic.twitter.com/mrsSxfmzox

Well done to the #waspiwomen protesting in the public gallery. It’s a total disgrace the Chancellor has nothing to offer them. @theSNP will continue to put your case forward @WASPI_Campaign #Budget2018 #WASPI pic.twitter.com/KruRHOzlaD

The issue the women were making some noise about has been brewing for years.

As the Women Against State Pension Inequality (WASPI) campaign explains, the result of these reforms is that:

hundreds of thousands of women born in the 1950s (on or after 6th April 1951) have been hit particularly hard.

They have seen their retirement age increase by up to six years. It has meant women cannot claim their pension until 65 from November 2018 and until 66 from October 2020. It was off the back of these changes that the WASPI campaign was born. The group has been pushing politicians to change the rules ever since.

So far, the government has failed to do anything about the WASPI women’s plight. And with nothing in the budget, their campaign continues. But as Monday’s events in parliament showed, they won’t be kept quiet.