Women are uniting and reclaiming the fight against fascism - Canary 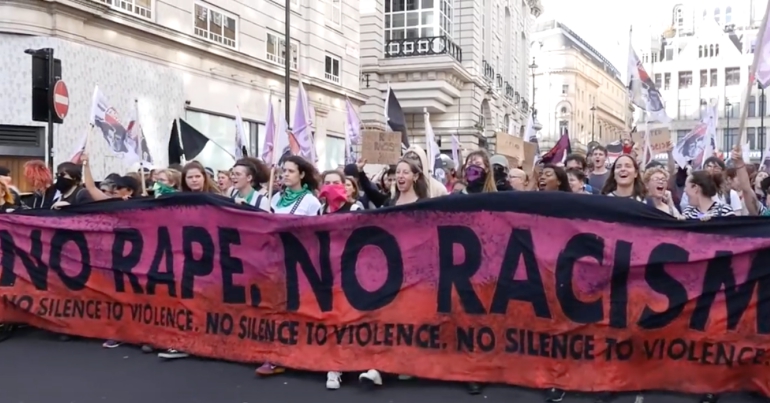 Sunday 25 November is the International Day for the Elimination of Violence against Women. And in London, a group of feminists of all genders is uniting to “Reclaim the Fight” and to “Rise Up Against Fascism”.

Organised by the Feminist Anti-Fascist Assembly (FAF), the demonstration in central London has the support of a diverse range of groups, including the Kurdish Women’s Assembly, United Voices of the World, Brazilian Women Against Fascism, and the Women’s Strike Assembly.

The Canary caught up with Ava Caradonna from FAF to talk about the protest, and why its message is so important. Her message is clear:

Women’s work makes life possible. For this, we are rewarded with violence and exploitation in the streets, at work and at home. We’re told that our inferior position in society, and our suffering, are inevitable – even natural. We still earn less and are expected to put up with disrespect, discrimination and assault at work and in our communities. We have had enough. In solidarity and righteous feminist rage, we are fighting back across the world.

Traditionally, the London Feminist Network has set up “Reclaim the Night” marches to mark the day. But Caradonna believes it’s important to move away from the language surrounding these events, telling The Canary:

It was important for us to distance ourselves from the previously organised Reclaim the Night protest. Reclaim the Fight: Feminists Rise Up Against Fascism is for people of all and no genders. We particularly welcome the participation of trans women, non-binary people and sex workers who are often excluded from feminist mobilisations. The UK has seen a rise in feminist organising that specifically targets sex workers and trans women in violent and exclusionary ways. Feminist anti-fascist organising cannot happen without trans women and sex workers at the very centre of our movements; it never has and it never will.

We can also see this unifying language in FAF’s call to action:

It’s ok to be scared. A fascist has just been elected as President in Brazil. In the US a white supremacist murdered eleven Jewish people in their synagogue and white nationalists have been elected to Congress. The Trump Administration has launched a deadly attack on transgender people’s right to exist and anti-trans feminists in Britain are using their powerful standing to target trans people, and trans women in particular. The Israeli government continues to commit genocide against the Palestinian people with weapons sold to them by the UK. The Polish President included far-right groups as co-organisers of the official state celebrations of the National Independence Day, thus legitimising their anti-migrant and white-supremacist rhetoric. The fascist Turkish government has invaded and occupied the Kurdish city of Afrin in Rojava/northern Syria and is working with genocidal groups in the Middle East to try and defeat the Kurdish revolution and, in particular, its women-led resistance.

Making the links between sexism and fascism

Caradonna says that FAF is “building an anti-racist feminist movement of resistance, highlighting the inherent sexism in fascism, with the vision that ‘anti-fascism must be feminist, and feminism must be anti-fascist'”. But she is also critical of the way other organisations have, to date, ignored the links between fascism and sexism:

To date, anti-fascist organisations in the UK such as Stand Up to Racism (SUTR) and Unite Against Fascism (UAF) have focused on the link between fascism and racism. Missing from the movement have been the experiences and demands of women of colour and migrant women.

And she points to a rise in “fascist rhetoric” about women that makes this link so crucial:

We’re seeing a rise in fascist rhetoric that specifically positions women as machines for breeding. The bodies of women who are deemed “acceptable” by the far right are being seen as being at the service of men and the state, while migrant women, queer women and trans women are targets of fascist violence. This type of rhetoric is on the rise in Poland, Northern Ireland, Italy, Argentina, Brazil and the US, with abortion rights under threat in many of these countries while migrant women’s bodies come under scrutiny and they are separated from their children.

This is about control over our lives and our bodies.

Caradonna says FAF is organising a “militant and joyful” protest that is also accessible. This is evident in the detail within its accessibility post and initiatives such as having a mobile-crèche kids’ block as part of the march with “snacks and drinks & balloons, glow sticks and bubble blowers”.

The Canary asked her what she would say to anyone thinking of joining the protest:

We need your help to build a militant and joyful demonstration against the rise of fascism and structural violence. The joyful demonstration is militant and inclusive to people of different backgrounds. Now is not the time to stay silent. It is vital that we recognise fascism as a threat to women everywhere. We stand with our sisters across the globe, united in fighting the combined forces of fascism and patriarchy.

That militancy is also at the heart of FAF’s text about the protest. It stresses that “it’s ok to fight back”. And it points in particular to the actions of Anna Campbell. Campbell joined the YPJ, an all-female Kurdish-led force in northern Syria (aka Rojava) to fight against Daesh (Isis/Isil). A Turkish airstrike killed her in March.

Feminists across the world are leading the resistance against fascism. Kurdish women and their internationalist comrades, such as British anti-fascist feminist Anna Campbell, have been resisting the brutal patriarchal attacks of ISIS who assault and mutilate the bodies of women as part of a wider tactic of using sexual violence as a tool of war.

Away from Sunday’s protest, The Canary also asked Caradonna what she thought we could all do to fight back against fascism and gendered violence in our communities. While she was pragmatic in saying there are “no easy answers”, she was also clear about the first steps:

Victims of violence are consistently failed by the state and the public: not believed or adequately supported, subjected to invasive police procedures and treated with suspicion. The first steps to take are trying to care for each other in our communities as best we can, and to recognise that gendered violence will not come to an end even if police funding is increased or the state lobbied to provide better service.

And she believes there are important conversations we need to have in our communities:

In our assemblies across the country over the past few months, we have had difficult conversations about what violence looks like in our own lives. It’s conversations like these that can begin to provide alternatives to existing routes of dealing with violence.

She also pointed out the importance of “being vigilant and aware of far right mobilisations in our communities”.

Women are fighting back

FAF is showing that women everywhere are uniting and fighting back. Through being accessible, inclusive and, importantly, militant, it is showing our collective strength and the power of resistance.

And with the rise of the far right in the UK and across the globe, it is something that we desperately need.